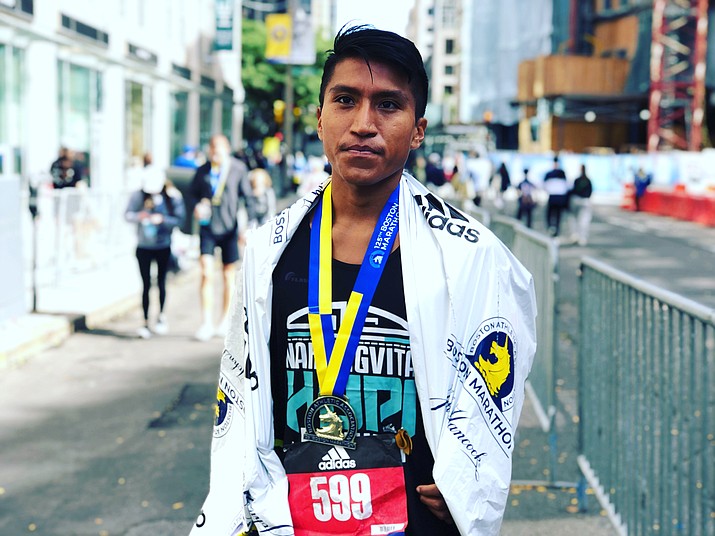 It was still dark out when Kyle Sumatzkuku woke up for another early start Oct. 11. The outside air over Boston, Massachusetts was crisp and clean. There was a light fog that patiently waited for its queue to lift. Rain drizzled on the city skyline, back-dropped by rain clouds faintly lit by the eastern rising sun.

It had been more than thirty months –— 900 days — since the last Boston Marathon had been held in-person. On this particular day, Sumatzkuku was quiet and focused. He beamed with an anxious excitement for the first time since the coronavirus outbreak had impacted the Hopi community.

Last year's Boston Marathon race was postponed until September 2020 and then called off because of the uncertainty of the pandemic.

This year’s marathon was moved again from Patriots Day in the hopes that the pandemic would go away — leading to the first fall Boston Marathon. It also happened to fall on Indigenous People’s Day.

“I was so focused and in the zone for the race sometimes it (felt) like a blur,” Sumatzkuku said. “It was monumental to be at the start line with thousands upon thousands of amazing runners from all over the world.”

This was Sumatzkuku’s first Boston trip and first opportunity to run with credible runners on an international stage. 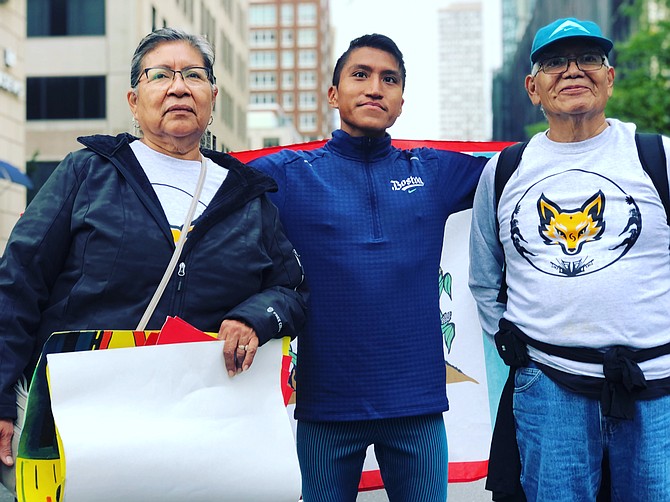 Sumatzkuku was true to form on race day, wearing a shirt emblazoned with his name and moving swiftly through the crowd of runners.

On Medal Monday, as most Boston Marathon finishers refer to it, the bustle of the crowd was busy like buzzing bees. Sumatzkuku and Team Leetayo navigated through the barricades and adapted to the strict safety measures put in place by the Boston Athletic Association. It was more effective to drive to the start line as Sumatzkuku prepared for the race.

Around 8:32 a.m., Sgt. Daniel M. Clark, also known as the “The Singing Trooper,” performed the National Anthem to open the 125th celebration of the meet. Clark has performed at the Boston Marathon every year since 1990.

This year, there was an official estimate of just over 18,200 total entrants, almost half of the typical 30,000 plus participants. Around 3,492 of those entrants were from Massachusetts, and approximately 16,441 other entrants residing throughout the U.S.

Additionally, there were 104 countries and all 50 states represented by qualifying participants.

In addition to Sumatzkuku, there were two other runners from the Hopi reservation, who represented Arizona – brother and sister duo Caroline and Wayne Perry Sekaquaptewa, from the Village of Sipaulovi.

By 8:37 a.m. Patti Catalano Dillon, three-time runner-up, American record holder and a strong Indigenous runner was acknowledged as the official starter for this year’s race.

After the small field of Professional Men and Women Divisions set off, the rest of the 18,000 or more runners made their way to the start line.

Shortly thereafter, a loud ‘bang’ announced the official start of the marathon. The first few miles of the race can be deceiving, as the course features a progressive decline in elevation and runners have a tendency to move fast too early, which they ultimately pay for later with muscle fatigue.

Sumatzkuku ran the first five kilometers at a steady pace of 5:21 minutes per mile.

“During the race, I felt really ready,” he said. “I put my body into motion and just let it roll. Mentally and spiritually I was running to represent my community, our people and the Hopi tribe.”

Sumatzkuku said it was inspiring to run in solidarity with his friends Caroline and Wayne, and all tribal communities and several Indigenous runners from all over the globe.

“Each one representing a voice for our people,” he said.

Another feature of the festivities was the Boston Marathon Fan Fest presented by Amazon in Copley Square Park. Fan Fest served as an opportunity for marathon race fans and families to witness live music, entertainment, photo-ops, meet and greets, archives and the Boston Marathon training clinic.

The Boston Marathon Fan Fest area was also the host to an Indigenous People’s Day and Indigenous Runners recognition and art mural project.

"We wanted to have a conversation, create dialogue, and the mural depicting past and present Indigenous runners was one way to do it," said mural artist Yatika Fields, of the Osage, Cherokee and Mvskoke Creek Nation.

During the race, Sumatzkuku said he ran for the earth and for the Hopi culture.

“I ran for land we live on which we need to protect, the clean air we breathe, and especially the water which is precious to us all,” he said. “I ran for the strong cultural knowledge and traditions passed down from our ancestors, the teachings that guide us and the cultural practices that make us who we are today.”

Sumatzkuku closed out his first Boston Marathon with a phenomenal finish, setting a new personal best and personal record for the endurance race. With an official time of 02:26:17, he placed 48th overall out of 18,000 participants, averaging 5:35 minutes per mile.

“I am happy to be resting now, but ready to represent Hopi and our community in the next race,” he said.