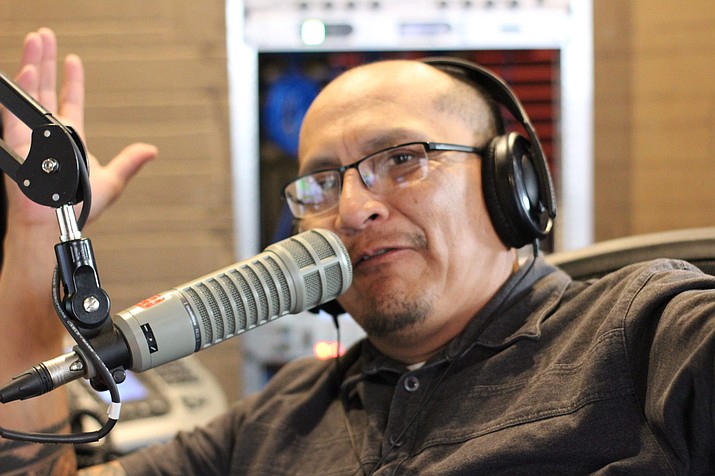 Cuyler Frank of the Navajo Nation began his career in communications at New Mexico State University where he provided audio and video content in Navajo for the agricultural college. (Photo courtesy of Navajo Technical University)

PHOENIX — There is no literal translation of the word “touchdown” in Diné, but that hardly mattered.

History was made in the “Land of Enchantment” in September as two men from the Navajo Nation broadcast a college football game in their Native language. Known as the “Rio Grande Rivalry,” the Division I game between the University of New Mexico and New Mexico State University marked a pivotal juncture with the sport and the way it is called over the radio.

While Cuyler Frank and Glenn King reveled in their historic moment, the road following the momentous occasion matters the most to the Navajo Nation duo, with a desire to preserve their native language at the epicenter of what they do.

The road to radio, part 1

Frank, a New Mexico State alumnus, began his communications career through the university’s agriculture communications department where he helped develop audio and video in Navajo to be used in how-to videos like cattle handling and sheep management.

His career in sports began through happenstance. Frank was in the studio speaking Diné, the native language of the Navajo, during one of his assignments when New Mexico State’s then-athletic director, football coach and media director for the athletics program walked by and overheard him.

“The coach at the time was Hal Mumme and he came into the studio and asked what kind of language that is,” Frank said. “I told him, and he said we don’t have that language, would you be willing to do a game?”

An avid football fan, Frank never missed a game during his time at NMSU. It was during these games that he would jokingly pretend to be a play-by-play broadcaster for his friends as they sat in the stands, never imagining a day where he would be broadcasting professionally from the booth.

It was September 23, 2005, when Cuyler Frank became the answer to a Jeopardy question. He was the first person to announce a Division I football game in Diné, his voice taking over the airwaves on KRQE radio for all New Mexico State fans to hear.

Frank would go on to call football and basketball games for nine seasons at New Mexico State before switching to his current role as station manager for 107.3 FM KCZY, a Navajo Technical University radio station located in Crownpoint, New Mexico.

The road to radio, part 2

Glenn King’s journey into the broadcast booth began after his lengthy 16 years of service in the military as a Marine. When he returned to his hometown of Whitehorse Lake, New Mexico, King began to frequently listen to radio, noticing the mistakes and mishaps the hosts would make.

A gentle nudge from King’s mother in the early 1990’s drove him towards his first job in radio with 1330 AM KGAK, a Navajo- language exclusive station located in Gallup, New Mexico.

King used his knowledge of what was happening and what people were doing across the Navajo Nation to tap into the heart of his listeners, guiding them through their day-to-day lives on the reservation, encouraging them to “take that next sip of coffee.”

After a few years at 1330 AM KGAK, King transitioned to Farmington’s KNDN 960 AM, another radio station that broadcasts exclusively in Navajo. Here he met a man from Tse Bonito, New Mexico, who persuaded King to begin volunteering for Christian broadcast station KHAC 880 AM.

Eventually King wanted to work in radio closer to home, so he began volunteering at 107.3 FM KCZY when it first launched as a community and educational broadcasting station in 2016.

From airwaves to in person

Friends on the airwaves, the partnership between Frank and King began from afar in 2007 when King would help Frank correct his terminology and connect his audio to the radio station from games at NMSU remotely. However, it wasn’t until 2018 that the Navajo Nation duo finally met in person.

Unable to put a name to a face, when the dynamic duo began working together at KCZY neither initially recognized each other as they had only heard each other’s voices.

“We were putting on a show together because King said, ‘Hey let’s go make a show and produce it.’ So, we make a radio show together and we both thought, ‘Hey we’re a very novel show,’” Frank said. “We had been working together for six months and we never knew. I had never seen his face, only heard his voice. It didn’t dawn on me, but he remembered me and I’m grateful we are together.”

They are still producing the same radio show they started all those years ago and while they still focus on football, the two are working on new ideas for the radio station and their students in an effort to help preserve their native language.

Like many other indigenous tribes, the Navajo have their own language – Diné Bizaad. In 2021 the Navajo language was designated as “vulnerable” by UNESCO even though over 170,000 people still speak it.

Dr. Audra J. Platero, principal of the Tséhootsooí Diné Bi’Ólta’ immersion school in Window Rock, offered two explanations for the rapid decline of the language, according to a May 2021 article from CGTN, an international media organization.

A secondary factor hitting closer to home is Arizona Proposition 203, also known as English for the Children, a ballot initiative that was passed by voters on November 7, 2000. The proposition which made Arizona an “English-only state law” requires all public school students who are “English learners” to be taught in English immersion classes, further creating a divide in the preservation of their native language.

A survey conducted in 2017 by “Ethnologue: Languages of the World” suggests there are over 171,000 fluent Navajo speakers worldwide, with 7,600 being only Navajo speakers. During this time AnCita Benally, the program manager for the Office of Standards, Curriculum and Assessment Development, a subsection of the Department of Dinè Education, predicted that in 2021, the census will show the decline of the Navajo language by as much as 30 percent.

In conjunction with their ideas and lived experiences together, Frank and King are putting together an innovative way to help preserve Diné through sport.

With no real translation between English terminology in sport and Navajo, the two have begun to assemble a translation glossary to guide Navajo listeners as well as pique the interest of those who may want to learn. To King, it’s a practice that is reminiscent of the Navajo Code Talkers, the famed U.S. service members who used their knowledge of Native American languages to transmit secret Allied messages in World War II.

“When we were broadcasting the football game, some of those terms that are used, like touchdown and even the positions where the players are, we had to come up with certain terminology for each thing like that because there’s no Navajo translation,” King said.

“It reminded me of the Navajo Code Talkers during World War II. They used code and made up code and I think about those kinds of things. That’s what we are seeing and what we are doing.”

Through collaboration with a Navajo translator at the technical college, the duo hope to make the glossary accessible digitally on their Facebook page and radio station website, with a larger plan to distribute the glossary across the reservation for their avid KCZY listeners and sports fanatics.

The call to preserve their language is not out of self-recognition, King and Frank said, but rather a deep respect for the culture coupled with their deep desire to help the next generation of Navajo.

“What’s most important to me are the youth and what we can do for them and lay out for them right now that they can be a part of,” Frank said. “Not only that but it has to be relevant to our culture. I came back to tribal college to be a part of the change to preserve the language and culture, to help as an agent of change and be there for those that want to have these opportunities to be able to go to school and be successful.”

Opportunity is not in short supply at Navajo Technical University where the duo emphasize their legacy and, now, leverage in broadcast to their students.

After the pair made national headlines during the “Rio Grande Rivalry” game, Frank and King were pleased to hear that friends and family from all corners of the country are now tapping into their radio show.

From the East Coast in Connecticut and Washington D.C., to out west in Idaho, King said other Navajo tribes are sharing their work, garnering a lot of response and new broadcast inquiries.

Looking towards the future, the pair hope to tap into larger scale broadcasting efforts with big name franchises in sports. Be it the NFL, MLB, or NBA, the possibilities are endless for the Navajo Nation duo as they follow their passion to change the trajectory of Diné and broadcasting for generations to come.