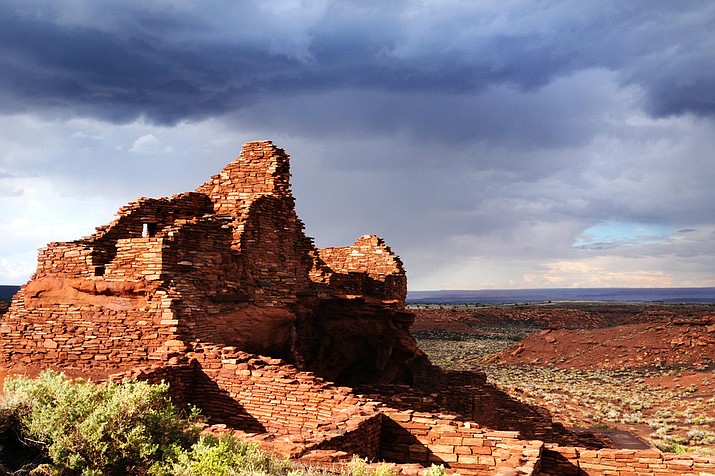 Wupatki Pueblo is in need of restoration because of many factors. (Photo/National Park Service)

The grant will allow the University of Pennsylvania Stuart Weitzman School of Design to develop a conservation and management plan and professional training program for the monument.

All three monuments are units of the National Park Service (NPS), a longtime partner of Penn’s Center for Architectural Conservation (CAC).

Frank Matero, CAC’s director, professor and chair in the Graduate Program in Historic Preservation at Penn said the work will be reflective of contemporary concerns that address climate threats and cultural appropriation and will develop a framework for sustainability as both a physical and cultural necessity.

“Identifying the vulnerabilities of sites like Wupatki is perhaps the most critical challenge currently facing all cultural and natural resource managers today,” he said. “Mitigation, resilience and adaption in the form of renewed cultural partnerships with affiliated tribal communities will move the conservation needs front and center in the model project.”

And part of the reason Ancestral Lands Conservation Corps is involved is to make sure people understand that Wupatki is not a ruin and it is not abandoned. Native people who are connected to it still know that it is alive and there are still important things that go on at sites like it, said Ancestral Lands Associate Director Kyle Trujillo.

“That’s why it’s so important to maintain them because they continue to harbor teachings and life,” he said. “That’s a big reason why our Zuni programs and our Pueblo programs continue to engage in historic preservation.”

Trujillo said it’s important with preserving a place like Wupatki, that Native people are involved in the project because they are the ones who have ancestral ties to it.

“We’re not going to send a bunch of non-Natives or even Natives who have no ancestral ties to those dwellings to do the work,” he said. “A big part of it is finding the descendants of those people who made those dwellings to do the work because they’re the ones who have a relationship, who have that tie and the connection to the place and know how to do it right with respect."

Trujillo said for the Wupatki project, Hopi and Zuni crews will do the work.

“The Diné office doesn’t do any of that work,” he said. “Speaking as a Diné, we can’t really do that work as Diné because it’s against teachings… so, it’s not just the work itself. It’s finding the people, making sure the people who are on the crews doing the work have that connection so that they can do it well and do it right.”

The type of work includes a lot of mortar patching, which is not always easy. When the pueblo was built, material was found on the landscape, but that isn’t something the crews working on restoring the pueblo can do today.

“Because it can impact those sites, we have to match it,” Trujillo said. “That’s a lot of the work, trying to use records, photographs, the documentation we have to try and match as best as we can what our ancestors constructed with.”

The Getty Foundation said Wupatki Pueblo is a traditional multi-room stone masonry complex that housed as many as 100 residents and today draws more than 200,000 visitors annually.

The Pueblo has undergone various preservation campaigns and ongoing maintenance over the past century, and as such is an example of preservation attitudes and techniques in the American Southwest for over a century.

In addition to extreme weather events and global warming, the site is also at risk from seismic instability, flooding and debris slides, the Getty Foundation said. Aging repairs and an incomplete understanding of the complexities of how sites like Wupatki deteriorate, especially in a changing climate, require adaptive strategies for the preservation and better management of all built heritage, especially archaeological sites.

“Getty has championed best practices in archaeological site preservation for decades,” said Joan Weinstein, director of the Getty Foundation, the grant making program of the J. Paul Getty Trust. “With climate change now impacting so many treasured sites throughout the Southwest, the project at Wupatki National Monument promises to make a major contribution to their protection, enriched by the participation of affiliated tribal communities.”

Trujillo said the organization recruits young Indigenous people from their own communities and they have offices based in those communities, which are run by community members.

“A big part of our program is that young Native folks are — some are very connected to the traditions, but a lot of us need to remember and reconnect to our culture and our traditions,” he said. “Bringing folks together from any level of connection to our traditions and lifeways helps us to remember together communally as community. And again, back in touch, not just with the land, but with each other and our history and our ancestors from wherever we may have come from.”

Trujillo said Ancestral Lands is growing and that there is a lot of interest in what they do, especially on a project like the project at Wupatki.

“I’m just excited to see us continue to partner with the National Park Service and the Vanishing Treasures team where it gives us the opportunity to reconnect to honor our history and to live our history,” he said.