University of Arizona launches program to work with tribes on sustainability 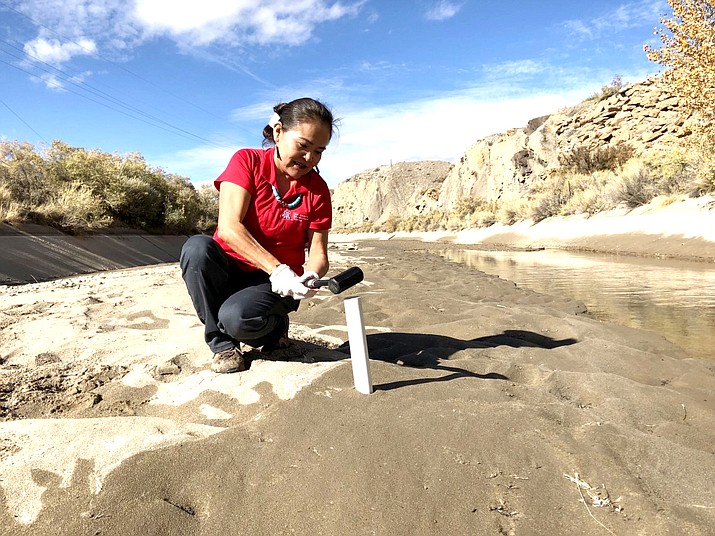 Karletta Chief, an associate professor at University of Arizona, pounds a soil sample tube into the Hogback irrigation canal near Waterflow, New Mexico, on the Navajo Nation in 2017. Soil sampling is done to measure arsenic and lead in the sediment to better understand the impact of the Gold King Mine Spill of 2015 on the Navajo Nation. (Photo courtesy of Karletta Chief via UofA)

The University of Arizona (UofA) has launched the Indigenous Resilience Center, a new initiative to support national and international Indigenous communities’ abilities to respond to environmental challenges such as climate change, droughts, flooding and pandemics.

“Arizona’s location — home to 22 federally recognized tribes — and the University of Arizona’s phenomenal strengths in climate resilience and water-related STEM research make us uniquely positioned to lead in this area and to effectively confront the many resilience challenges facing our region and our world,” Interim Director of the Arizona Institutes for Resilience James Buizer said in a recent press release.

Under the umbrella of the Arizona Institute for Resilience, the center will be led by professor of environmental science Karletta Chief, a first generation college graduate originally from Black Mesa, Arizona.

“My identity as a Diné woman drives me and the work that I do as an environmental scientist,” Chief said. “As a young child the grandmothers have always directed the children to gain knowledge and pursue education but to come back and use that knowledge to build a community up. I feel that I am going through that directive, as a scientist who is educated but also with a desire and passion to come back and to help tribal communities.”

The center’s first two priorities are to consult with tribes across the state and nation to learn what their environmental priorities are and build upon the University of Arizona’s existing projects with Indigenous people.

One project that Chief cited expanding is The Indigenous Food, Energy & Water Security and Sovereignty program UofA is using to develop off-grid water treatment systems that are solar powered.

“It can remove heavy metals such as arsenic, uranium and lead that are present in waters that the Hopi and Navajo people drink from,” Chief said. “We have been working with Diné College for four years now and we’ve been training the tribal college students how to operate and maintain the systems.”

UA will then recruit several new faculty alongside a new program director according to Chief. One of the objectives of the new center is to blend Indigenous knowledge with traditional STEM, the UA’s Native FEWS (Food, Energy, Water Systems) Alliance was touted by Chief as another example of programming to build upon.

The University of California at Berkeley, University of Arizona and American Indian Higher Education Consortium entered into a partnership and was awarded $7 million by the National Science Foundation for the next several years to recruit and retain more Native American students to pursue their education and careers in food, energy and water.

This type of programming is currently being implemented at Diné College in a partnership with the UA. Each year, two seniors are brought on as research assistants while six Diné College juniors undergo a 10-week internship learning water management and treatment.

“We want to make STEM education relevant for Native American students as they’re pursuing their degrees,” Chief said. “It’s really acknowledging and valuing their community knowledge but also making it place-based, So that they can more clearly see how that knowledge can be applied in their own communities.”

For Chief this community based approach goes to the root of Indigenous peoples’ approach to understanding the word.

“Every tribal nation has their own problem solving approach and that in itself is a scientific inquiry as coined by Western science,” Chief said. “But the approach is really rooted within the community, their cultural values, their community values, their beliefs … and it’s based on 1,000s of years of observation.”