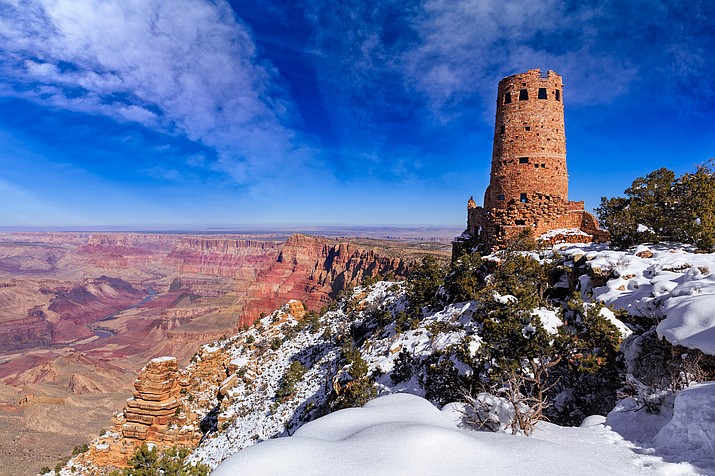 Desert View Watchtower is located on the South Rim of Grand Canyon National Park and is being converted into an Inter-tribal Cultural Heritage Site. (Photo/Adobe Stock)

Lyndon, who has worked with local tribes for the past 15 years, said that parts of the park service mission are perfectly suited to working with Indigenous communities, such as identifying resources and special places in the Grand Canyon, understanding potential impacts and working to protect and preserve resources through collaboration and interpretation.

"(Interpretation is) basically just telling the story of the park and the human connection to this place," Lyndon said. "We are doing a tremendous amount of work in the interpretive arena."

Lyndon explained the reason the Tribal Program exists in Grand Canyon is because of the proximity to numerous tribal communities, many of which exist just outside of the park boundaries, including the Navajo, Hopi, Havasupai and Hualapai.

"Grand Canyon is an incredibly important place, a sacred place to the diverse cultures around Grand Canyon," he said. "Tribes have lots of specialized knowledge about this place and these resources, and if we incorporate that knowledge and consider that in our decision-making, we're better land managers."

Lyndon explained that he is working to facilitate GCNP's service to tribal communities, which will ensure stewardship of the park's resources will benefit tribal stakeholders.

The three-part mission will focus on interpretive development, economic development and increased outreach to indigenous communities.

Interpretive development focuses on ensuring visitors to the park see an increase in Indigenous narratives and information about Native partners, which will be culturally-accurate and told by Native Americans.

Part of the interpretive development plan includes significant modifications to areas of Desert View, which is located near the east entrance of GCNP.

"Given the significance of the site, its infrastructure, and proximity to neighboring tribal lands, the NPS is proposing to transform Desert View from a traditional scenic overlook and visitor services area into an Inter-tribal Cultural Heritage Site that provides opportunities for first-voice cultural interpretation from associated Native American Tribes, including cultural demonstrations, and enhances visitor orientation to both the cultural significance of the site and greater park, as well as information about tourism opportunities on surrounding tribal lands," the NPS stated on its park planning website.

According to the park, the development of the site plan is an ongoing cooperative effort between the NPS and a number of partners, including representatives from the Kaibab Band of Paiute Indians, Havasupai, Hopi, Hualapai, Navajo, Zuni and Yavapai-Apache tribes, Grand Canyon Association, American Indian Alaska Native Tourism Association (AIANTA), the Bureau of Indian Affairs and park concessionaires.

Lyndon explained that in addition to providing information to visitors, the park wants Native Americans visiting the park to see their cultural traditions being celebrated, and that Native people are being welcomed into the park.

According to Lyndon, GCNP generates $1.2 billion per year in economic benefit throughout Arizona, and the Tribal Program is having ongoing discussions with tribal partners about how to ensure the economic benefit extends to the Indigenous communities surrounding Grand Canyon.

Lyndon said the program's partner — Grand Canyon Trust, has been working to develop an "Indigenous economic summit" which he referred to as the Emergence Economic Summit, to explore ways to expand economic benefit to Native communities.

The summit, which so far does not have a tentative date, will take place "later this year" at Grand Canyon’s South Rim, and according to Lyndon, will include Native entrepreneurs, cultural representatives and community representatives.

Lyndon said that by increasing outreach to Indigenous communities, the program hopes to improve the representation of Native people in the area.

"In Coconino County, nearly a third of the population are Native people and so we are really trying to be out in Native communities and sharing information on employment opportunities and providing people with information on how to pursue those opportunities, if they are interested, in order to have more people working with us here in Grand Canyon to help steward these resources," Lyndon said.

"I'm happy to be a point of contact for folks and if I can't get you the information that you're after I can put you in contact with a more appropriate resource," Lyndon said.