Diné men and women are most recent graduates for Navajo Police 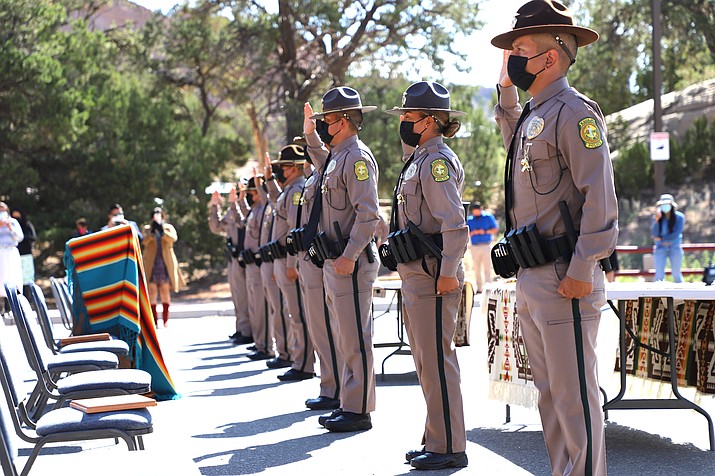 Class 56 completed challenging training in academics, physical and mental conditioning, communications and firearms to receive their badges. The academy also integrates Diné Fundamental Law, as well as state and federal laws, into its curriculum.

“Serving in the line of duty will be a physical, emotional, and mental challenge for the new officers and their loved ones. However, through prayer and the support of their families and communities, I am confident they will serve and protect our communities well. Thank you for taking on this difficult challenge and serving our people,” Nez said.

The 12 recruits took the oath of honor administered by District Court Judge Cynthia Thompson, while their loved ones participated in pinning the Navajo Police Department badge. Recruits include:

“May God keep you safe and protect each one of you as you start your new journey to protect and serve. God, give them the strength, courage, and perseverance to endure the danger, stress, and the things they will see. Bring them home safely to their loved ones after each shift. We ask for prayers for our first responders and let’s appreciate and thank them,” Lizer said.

“Our Navajo police recruits have the most distinguished training than any police force in the country. They are trained in many areas than the county, state, or federal agencies. We are thankful that the 12 police officers are giving back to the community with their bravery and courage,” Delmar said.

The officers will start their duty as Navajo police officers within their designated districts immediately.

Information provided by the Navajo Nation Office of the President