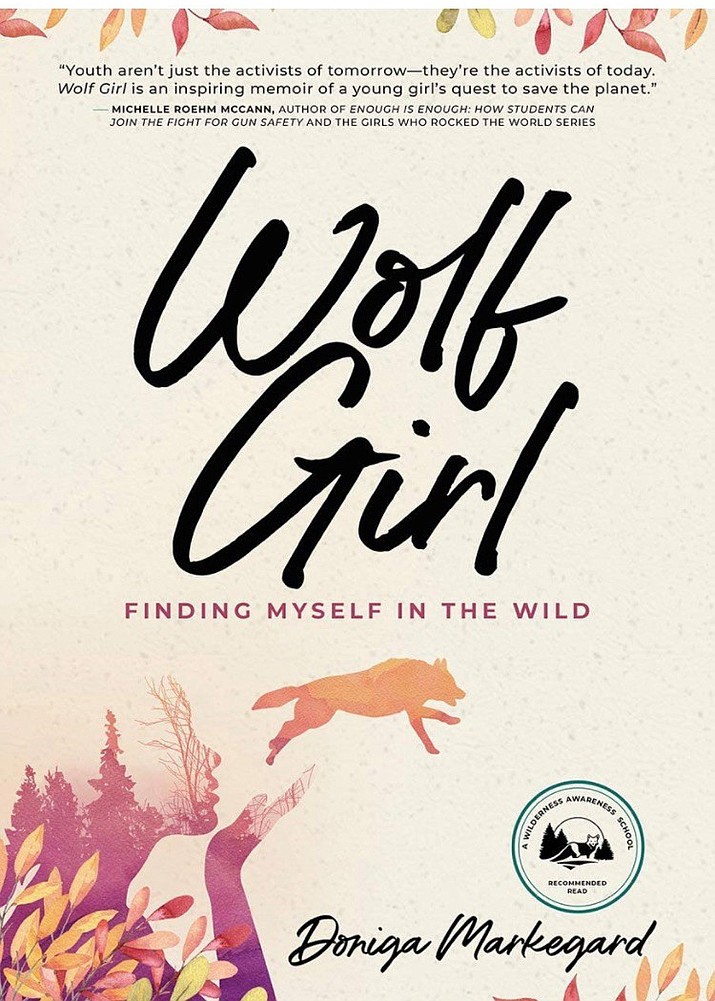 FLAGSTAFF, Ariz. — Native American teenagers, who are feeling lost, can find guidelines for life and how to live with nature in adopted Native American author Doniga Markegard’s book ‘Wolf Girl.’

Doniga, who was brought up by a single mom, was a runaway lost teen until she started attending a Wilderness Awareness School (WAS). It was there that the Lakota elder Gilbert Tatanka Mani took her under his wing and later adopted her in a Native ceremony.

The most important advice Mani passed on to Markegard was the seven sacred principles of the Lakota for the secrets of life.

First, is to have an inner quietness to calm your mind in order to feel at peace with yourself and your surroundings.

Second, is to have love and compassion for those close to you.

Third, is to have a deep caring for all living things including the animals, the roots, the trees and all of nature.

Fourth, is to take your feelings and use them to help those in need.

Fifth, is the feeling of being fully alive so you can enjoy each and every moment of life.

Sixth, is the heartfelt joy that comes from childlike curiosity, wonder and delight to enjoy each moment of creation.

Seventh, is the sacred state of mind, body and spirit in order to use the instinctual powers that come when all three are working together.

Markegard said her adopted Lakota father was an incredibly kind, sweet, gentle soul. Unlike some Native Americans, he was not raised in missionary schools and did not learn English until he was in his twenties, because he was raised in refugee camps. He found his way to WAS about the same time as Markegard, only he was there as a mentor for youth.

Markegard said she was grateful that Mani was there to help her find herself and work through some of life’s problems.

“He told me that he wanted to adopt me as his daughter. He had no children of his own,” she said. “I remember that moment. It just humbled me that he trusted in me. I would share that with other people. I felt this wave of love and compassion. It came with a responsibility in a joyful way.”

Mani passed away 13 years ago, but Markegard said she is passing on some teachings he taught her.

The Lakota seven sacred principles are posted on the wall of Markegard's kitchen and every time they share a meal one of her children read at least one of the principles aloud. She said this helps her reflect on her own personal journey.

“It would be nice if more people learned to live by them,” she said.

Markegard said while it’s hard to pick a favorite among the seven that the first one about inner quietness comes up first because she seeks to have that moment every day.

For her, it helps to set the tone for the day.

“If I miss that, it’s not nearly as peaceful,” she said.

As for helping lost teens, she said it’s tricky in today’s world because it’s hard to escape the technology environment, especially following the coronavirus pandemic. She strives to limit her own teenage's time on their computers or phones.

“I try to prolong that childhood innocence they get when they go outside to play,” she said. “It can take going away from cell service into the wilderness where they do not have a choice.”

Markegard said her children love playing games in the woods and they come back happy after they do that.

Markegard’s mother was in touch with an old friend and happened to house one of the instructors and a visiting elder. When Markegard was home they saw she was trying to figure out her life and talked her into enrolling at the school when she was 14. Markegard remains unsure whether this happened by accident or if her mom planned it.

One of the most important lessons she learned at the wilderness camp was the interconnection of nature.

She said when humans do not realize this, problems like climate change occur. She said people cannot just be told this; they need to see it. She added this means that children need to be taught early on about the interconnectedness of nature and adults need to model their love of nature. This means questioning where food comes from, what actions you are taking to support nature and finding that interconnectedness with nature.

Markegard said the wilderness is important because it shows limitless possibilities.

On her ranch, Markegard is involved in permaculture and regenerative ranching. Permaculture is how humans ecologically produce food that cares for the earth and the people while at the same keeping abundance for the planet. Permanent agriculture means moving forward in harmony with nature.

Regenerative ranching works to build healthy soil so that ranchers not only produce food, but sequester carbon into soil and create more life than every life that is taken.

Markegard is working on a section of a book for a friend about the farm to table movement.

‘Wolf Girl’ can be found on Amazon and other online sites.