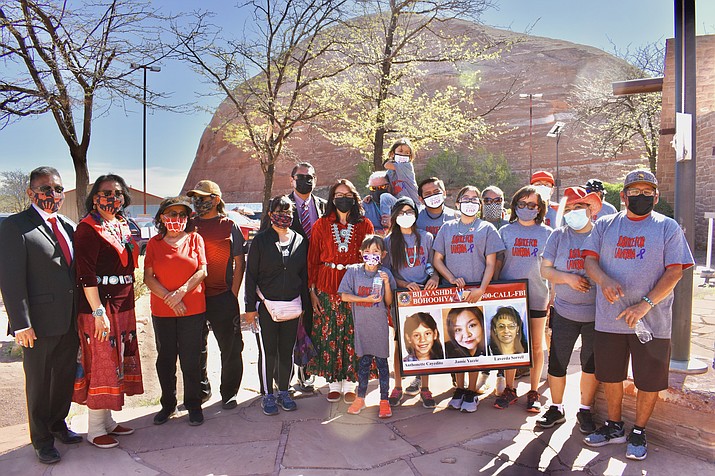 The order explained that generations of Native Americans have experienced violence or mourned a missing or murdered family member or loved one and that the lasting impacts of such tragedies are felt throughout the country.

“Native Americans face unacceptably high levels of violence and are victims of violent crime at a rate much higher than the national average,” the order reads. “Native American women, in particular, are disproportionately the victims of sexual and gender-based violence, including intimate partner homicide.”

“Far too many of our Navajo people continue to endure the heartache and frustration of a missing loved one. We have to continue to work together to do more for our people. We thank President Biden, Secretary Haaland, and all grassroots and community advocates,” Nez said.

First Lady Nez said more needs to be done to address missing persons including the reauthorization of the Violence Against Women Act, to help resolve jurisdictional issues that arise in cases involving violence against Navajo women by non-Navajo perpetrators.

“We appreciate President Biden and First Lady, Dr. Jill Biden’s, support for all missing and murdered Indigenous relatives across the country. The Executive Order will help agencies at the federal, state, and tribal levels to better communicate and work together to address data sharing and collecting, responses by law enforcement, and support for families of missing persons,” she said.

Biden said he was directing federal officials to work with tribal nations on a strategy to improve public safety and advanced justice.

“This builds on the work we did together on reauthorizing the Violence Against Women Act in 2013, when we granted authority to tribes to exercise jurisdiction over non-Indian offenders who commit violence on tribal lands,” Biden said. “We’re going to reauthorize that again, we’re going to expand the jurisdiction to include other offenses like sex trafficking, sexual assault and child abuse.”