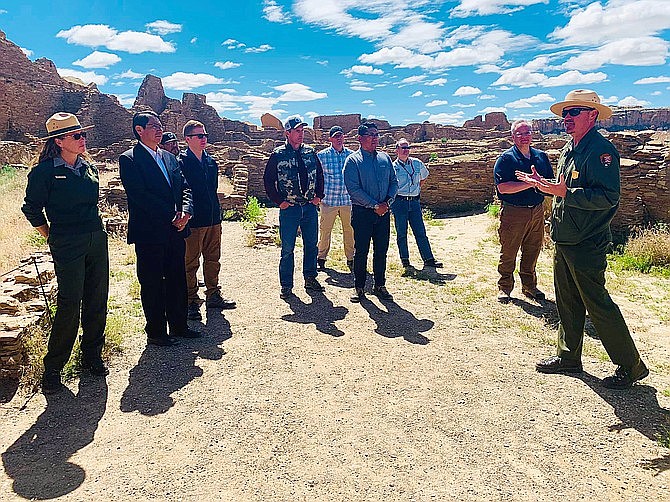 According to a DOI press release, the Bureau of Land Management (BLM) will initiate consideration of a 20-year withdrawal of federal lands with a 10-mile radius around Chaco Culture National Historical Park, which would bar new federal oil and gas leasing on those lands.

“Chaco Canyon is a sacred place that holds deep meaning for the Indigenous peoples whose ancestors lived, worked and thrived in that high desert community,” said U.S. Secretary of the Interior Deb Haaland. “Now is the time to consider more enduring protections for the living landscape that is Chaco, so that we can pass on this rich cultural legacy to future generations.”

The announcement builds on years of efforts by the Pueblos and tribes, local communities, advocates and elected officials to protect the greater Chaco Canyon area.

Most recently, Congress instituted a one-year pause on new federal oil and gas leasing within a 10-mile radius of the park, as well as appropriated funding for ethnographic studies in the surrounding region.

The Navajo Nation Council expressed disappointment with the decision

The Navajo Nation Council said it passed a resolution in 2020 stating its position for a five-mile buffer around the sacred site instead of the 10-mile radius.

“The 10-mile buffer was a request from New Mexico congressional representatives to the Interior Department,” the Council said in a statement to the Navajo-Hopi Observer. “The Navajo people were not heard and the decision by the Navajo Nation Council was not respected. The Biden Administration and Congress did not hear from our Navajo families and made a decision that will affect them with no formal consultation.

The council said Navajo families are impacted because their voices were not part of the conversation in the beginning and their livelihood could be adversely affected by the decision.

“Many lease their lands and receive royalties, and rely on this as their only source of income,” the council stated. “The Navajo Nation Council is advocating for the people and their concerns.”

Haaland directed the Interior Department to undertake a broader assessment of the Greater Chaco cultural landscape to ensure that public management better reflects the sacred sites, stories and cultural resources in the region.

In the coming weeks, the BLM intends to publish a notice in the Federal Register that will commence a two-year segregation of the federal lands while the bureau conducts an environmental analysis and seeks public comment on the proposed administrative withdrawal. BLM will also initiate formal tribal consultation.

The segregation and potential withdrawal would not affect existing valid leases or rights and would not apply to minerals owned by private, state or tribal entities.