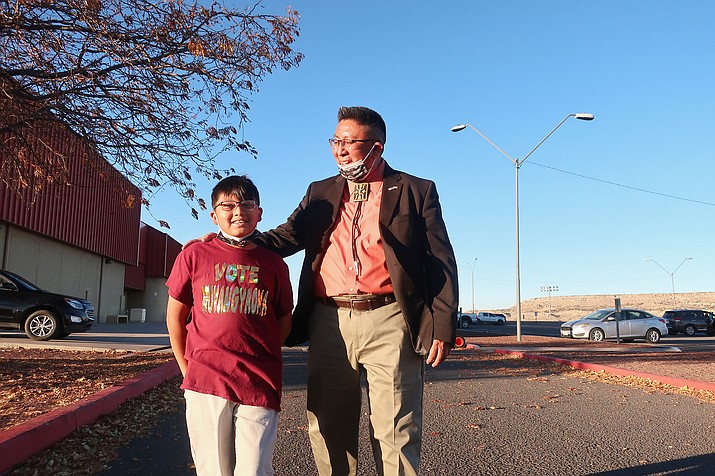 KYKOTSMOVI, Ariz. (AP) — The chairman of the Hopi Tribe in northeastern Arizona has won another term in office and will have a new vice chairman, according to unofficial results the Nov. 11 election.

Chairman Tim Nuvangyaoma had campaigned on reforming the tribal constitution to give Hopi citizens a larger voice in tribal government, to create a separation of powers and to remove the requirement for chairman and vice chairman candidates to speak Hopi to open up the opportunity for younger Hopis who don't speak the tribe's language.

Nuvangyaoma will have an ally in Vice Chairman-elect Craig Andrews, who beat incumbent Clark Tenakhongva. The candidates don't run on a ticket, but Nuvangyaoma and Andrews campaigned together.

Nuvangyaoma received 841 votes in the election, beating David Talayumptewa, a retired U.S. Bureau of Indian Education official who represents Kykotsmovi on the Tribal Council, by 254 votes. The two had faced off in the 2017 election but were separated by a wider margin than on Thursday.

Talayumptewa said Friday he has no reason to challenge the election results, which won't be final until the tribal elections board certifies them.

"I want to extend my appreciated to those who participated in the Hopi Tribal elections on Nov. 11," he said in a statement to the Navajo-Hopi Observer. "Although we ran a principled campaign fo rthe future of our Tribe, the people have apparently spoken and I respect their vote. With a year remaining in my term on the Tribal Council, I am eager to get back to the work of the Hopi people."

The Hopi chairman presides over the Tribal Council but doesn't vote except to break a tie. All other authority is delegated by tribal lawmakers who either are elected or appointed from some of the 12 Hopi villages. Other villages don't recognize the Tribal Council as the governing body.

Turnout was low with about 1,430 ballots cast, about 200 less than four years ago. Andrews received 802 votes to Tenakhongva's 628, unofficial results show.

About half of the 14,000 enrolled Hopis live on the reservation that's completely surrounded by the much-larger Navajo Nation.

The Hopi Tribe has been hampered by a loss of revenue from the closure of a coal mine in 2019. At recent forums for the candidates, Hopis indicated they want the leadership to create jobs, secure access to clean water, communicate better with the sovereign villages, and improve health care and public safety while upholding Hopi values.

The new administration will take office in December.