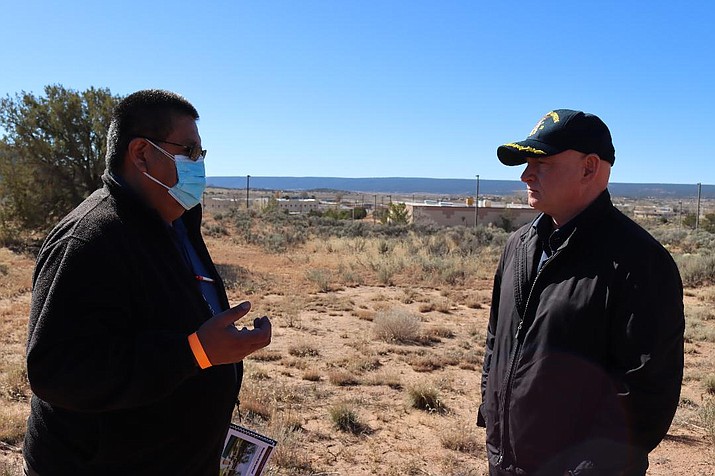 WINDOW ROCK, ARIZ. — Members of the U.S. Congress can smile on the local areas they represent or look the other way. In the case of Sen. Mark Kelly, D-Arizona, he smiled on the Navajo Nation Nov. 11 while taking a short Veterans Day tour and participating in listening sessions.

“Thank you for inviting me to the Navajo Nation and into these sacred chambers,” Kelly told a small number of council delegates gathered for an informal listening session.

A U.S. Navy veteran and former astronaut, Kelly was sworn into the Senate seat Dec. 2, 2020, to finish the term of the late Sen. John McCain R). “The recent infrastructure bill passed by Congress will be signed into law by President Biden.

“This act includes funds for tribal water rights settlements and a large allocation for water projects across Indian Country. We have been focused in the Senate on projects that will rebuild our country and lift up all Americans, which includes our tribal nations,” he said.

The council chambers sit-down included topics covering Arizona’s redistricting plans, water rights, public safety, the protection of the Chaco Canyon National Historic Park, and the Build Back Better Act being negotiated by Congress. Kelly said he knows people around the 27,000-square mile Navajo Nation have water issues, particularly with bureaucracy, and he’d like to be a conduit toward resolution.

“Sometimes the bureaucracy and red tape are overbearing,” Kelly said.

Kelly toured a Navajo Housing Authority project site, and visited a Saint Michaels homeowner who had water and sewage lines and a septic system installed in her house. He met officials from Navajo, Apache and Coconino counties and lauded the $1.2 trillion Infrastructure Investment and Jobs Act — which Biden signed into law Monday. The new law is the largest investment ever in tribal projects and includes:

• $2 billion for the National Telecommunications and Information Administration for the tribal broadband connectivity program to expand broadband access.

Council delegates didn’t hold back their praise for the senator.

“Senator Kelly, you are a friend of the Navajo people and we welcome you to the largest Indigenous Nation in the United States,” Speaker Seth Damon (Bááhaalí, Chichiltah, Manuelito, Red Rock, Rock Springs, Tséyatoh), said. “Our people appreciate your advocacy for our veterans, our elders, and all families across the Navajo Nation during this pandemic. You supported this bipartisan infrastructure bill that sends a clear message to Sovereign Nations around the country that we are a top priority.”

“Even after 40 years, our people are living in wood sheds with no running water or electricity in the western part of the Navajo Nation,” he said.

Bennett Freeze was a development ban on 1.5 million acres of Navajo lands by the federal government. It was put in place in 1966 in order to promote negotiations over a land dispute between the Navajo and the Hopi and lasted until 2009. It was named for the Commissioner of Indian Affairs at the time, Robert L. Bennett and meant that in the “frozen” area, no development could occur, inclusive of fixing roofs, building houses, constructing gas and water lines and repairing roads.

“It is evident that the Navajo Nation lacks adequate law enforcement in responding to our public safety concerns,” he said. “Many of the homes of our elders have collapsing roofs and have outhouses as their bathrooms. We have to work together to change this narrative.”

A Tucson resident, Kelly’s wife is former U.S. Congresswoman Gabby Giffords. Originally from New Jersey, Kelly is a retired U.S. Navy combat pilot, engineer, and NASA astronaut and a twin son of police officers. He attended the U.S. Merchant Marine Academy. As a naval aviator, he made two deployments to the First Gulf War and flew 39 combat missions in Operation Desert Storm.