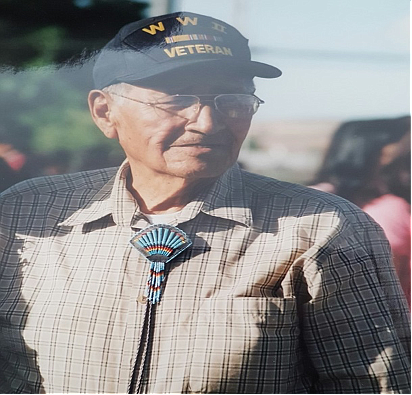 Flags are to be flown at half staff Nov. 16 to honor World War II veteran Steven Ashley Sr. (Photo/OPVP)

WINDOW ROCK, Ariz. — On Nov. 14, Navajo Nation President Jonathan Nez and Vice President Myron Lizer issued a proclamation calling for all flags on the Navajo Nation to be flown at half-staff Nov. 16, in honor and remembrance of Diné World War II veteran Steven Ashley, Sr., who passed away on Nov. 8 at the age of 95.

Ashley was Kiyaa’áanii (Towering House) and born for Tsi’naajinnii (Black Streaked Wood), and resided in Houck, Arizona at the time of his passing.

“Our thoughts and prayers are with Mr. Ashley’s wife, Pauline, their children, all of their loved ones, and his community at this time. Together, we honor and remember all his great sacrifices for our people and our country, as a member of the U.S. Army in World War II. He was a loving and caring husband, father, and grandfather who devoted his life to our country and his family. We pray that his family takes comfort in knowing that he is now with God at this time,” Nez said.

Ashley served five years in the U.S. Army during the World War II before being honorably discharged. He then returned home to Allentown, Arizona. and supported his family by working with the Navajo Office of Economic Opportunity under the Home Improvement Training Program. He learned how to construct homes. Ashley also served on the Sanders School Board, and as president and secretary for Lupton Chapter to address local needs of the community and other surrounding areas.

“We thank God for the life and service of Steven Ashley, Sr. By all accounts, he was a very loving and compassionate person who contributed greatly to his community and our country," Lizer said. "Words are not enough to thank him and his family for all of their sacrifices. We ask all of our Navajo people to keep his spirit and his family in your prayers."

Council Delegate Raymond Smith, Jr., who represents the Houck community as a member of the 24th Navajo Nation Council also paid tribute and offered his condolences to the family.

“I express my deepest condolences and send comfort to the family through my prayers. We will not forget the late Mr. Ashley's dedication to his country through his military service during the World War II campaign and his generation of caliber in our country's time of crisis," Smith said. "He unselfishly answered his country's call and stood fast on the foreign soils in the name of duty, honor, and integrity. We salute the Late Mr. Ashley and his family."

Several descendants have followed in Ashley’s footsteps by enlisting in the military, including his sons Stanley and Justin Earl Ashley, followed by a grandson, two granddaughters, two great-grandsons in the U.S. Army, and a great granddaughter in the U.S. Marine Corps.