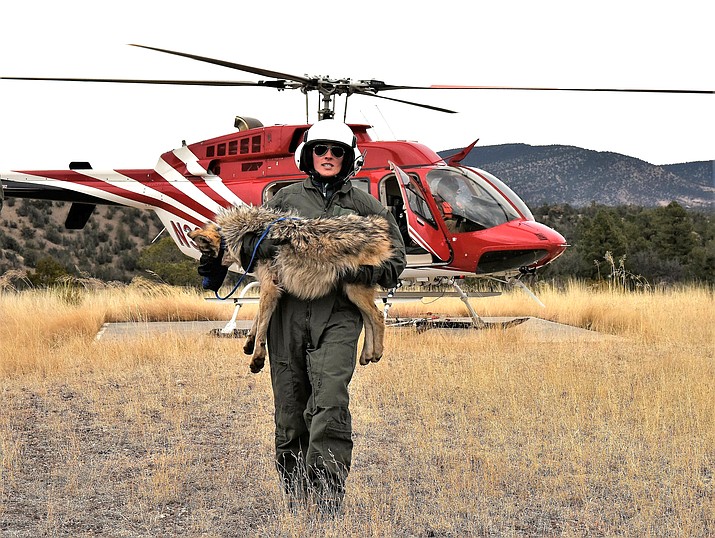 A member of the Mexican gray wolf recovery team carries a wolf captured during an annual census near Alpine, Arizona. Once on the verge of extinction, the rarest subspecies of the gray wolf in North America has seen its population nearly double over the last five years. U.S. wildlife managers said March 12, 2021, the latest survey shows there are now at least 186 Mexican gray wolves in the wild in New Mexico and Arizona. (Mark Davis, U.S. Fish and Wildlife Service via AP, File)

The proposal also would allow more wolves to be released into the wild in New Mexico and Arizona, and place restrictions on permits issued to ranchers or state wildlife agencies that allow the killing of wolves if they prey on livestock, elk or deer.

Management of the predators has spurred numerous legal challenges over the decades by both ranchers and environmentalists. The latest proposal follows one of those court fights. The U.S. Fish and Wildlife Service said the proposed changes would better align with revisions made to the species’ recovery plan.

The Mexican gray wolf, the rarest subspecies of the gray wolf in North America, has seen its population nearly double over the last five years. A survey done earlier this year showed at least 186 Mexican gray wolves in New Mexico and Arizona. Ranchers and rural residents have argued that’s an undercount and a more accurate number is needed.

Environmental groups consider the proposed changes a step in the right direction but say more needs to be done to ensure a viable population of Mexican wolves.

They say the boundaries established by the Fish and Wildlife Service for recovery of the wolves in New Mexico and Arizona are among the limiting factors. If the animals travel beyond the boundaries, they can be trapped and relocated, returned to captivity or potentially killed.

The Arizona Game and Fish Department captured a wolf in August that was roaming near Flagstaff outside the recovery project’s boundaries and relocated it to an area near the Arizona-New Mexico border.

Environmentalists said the wolf known as m2520 has trekked back. Arizona Game and Fish spokesman Tom Cadden said the department is monitoring the wolf’s location and behavior.

Environmentalists also have called for reforms aimed at limiting conflicts with livestock and releasing more captive packs into the wild.

“We stand ready to return to court on behalf of lobos (wolves) if the final rule is insufficient to conserve this critically imperiled species,” said Kelly Nokes, an attorney for the Western Environmental Law Center.

Ranchers in the mountainous regions of southeastern Arizona and southwestern New Mexico where the wolves roam say livestock deaths due to predation are escalating as the population grows. The latest report from wildlife managers put the number of confirmed livestock deaths for the year at 95.

The wolf recovery team uses feeding caches to draw wolves away from cattle, but ranchers say the wolves are becoming more brazen and that efforts to scare them away using range riders on horseback or flagging along fence lines hasn’t worked. They also say they don’t receive timely compensation for livestock lost to wolves.

“It is an incredible management hurdle for those of us on the ground to deal with the wolves,” said Tom Paterson, who ranches along the New Mexico state line and is a member of the New Mexico Cattle Growers Association. “Even if we put our cattle on private pastures where we are every day going around and looking, they still kill our cattle.”

Paterson has lost several cows and calves this year. He described a trail of blood that stretched 150 feet along a creek and cases in which cattle were attacked and their unborn calves eaten.

“This is a broken program,” he said.

The Fish and Wildlife Service is planning virtual public hearings and information sessions on the proposed changes. The public will have 90 days to comment.

Once common throughout the U.S. Southwest and northern Mexico, the Mexican wolf was all but eliminated by the 1970s, prompting the U.S. government to develop a captive breeding program. There are about 350 Mexican wolves in more than 55 zoos and other facilities throughout the United States and Mexico.