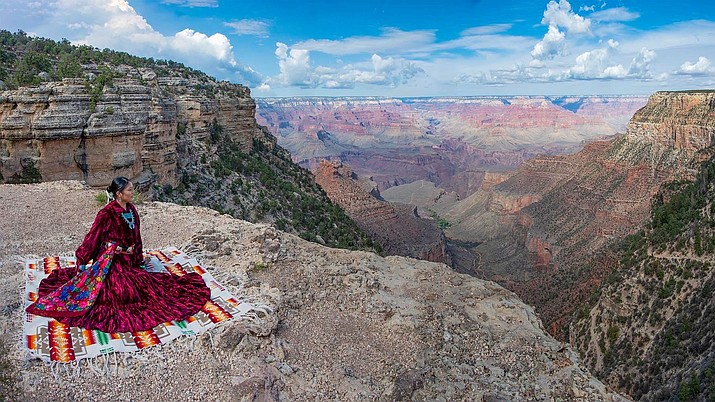 A Diné woman in a traditional dress, on the rim of Grand Canyon. (Photo/NPS, Mike Quinn)

ALBUQUERQUE, N.M. — The National Park Service has partnered with a tourism association to ensure the contributions, cultures and traditions of Native Americans are incorporated into exhibits and programming at sites across the country.

The park service says it highlights the history of Native Americans, Alaska Natives and Native Hawaiians throughout the year. The five-year agreement with the American Indian Alaska Native Tourism Association will expand opportunities, officials said.

Sherry Rupert, the chief executive of the tourism association based in Albuquerque, New Mexico, said previous partnerships at individual park sites have boosted awareness of nearby tribes.

She pointed to the Juan Bautista de Anza National Historic Trail, which stretches 1,200 miles from Nogales, Arizona to northern California. A guidebook has tribal attractions on or near the trail, and a map translates locations into Native languages.

A similar project is in the works at Lewis & Clark National Historic Trail that runs 4,900 miles through 16 U.S. states, from Pennsylvania to Oregon, Rupert said.

“Native American tribes have ancestral connections to public lands that pre-date the formation of the National Park Service by millennia,” Rupert said in a news release Wednesday. “These wholly unique perspectives can serve as the foundation for one-of-a-kind cultural content for National Park Service sites.”

In Arizona, 11 tribes associated with the Grand Canyon partnered with the park service to create an inter-tribal cultural heritage site at a historic watchtower at the national park.

The park service said visitors increasingly want more authentic experiences and opportunities to engage with tribal communities and to support Native-owned businesses. The tourism association will host virtual and in-person forums for the park service to hear from tribes.

The agency oversees more than 131,000 square miles of parks, monuments, battlefields and other landmarks. It employs about 20,000 people in permanent, temporary and seasonal jobs, according to its website.

President Joe Biden has nominated Charles F. “Chuck” Sams III to head the park service. If confirmed by the Senate, Sams would be the first Native American to hold the position. He is Cayuse and Walla Walla and a citizen of the Confederated Tribes of the Umatilla Indian Reservation in Oregon.