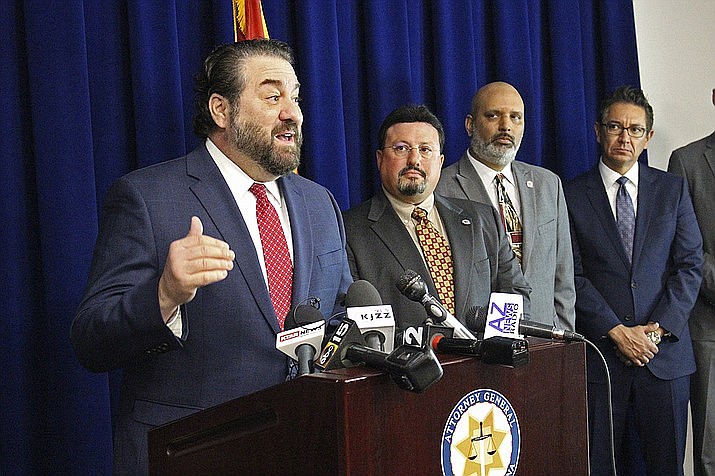 The Biden Administration formally unveiled its rules Thursday, Nov. 4, to require vaccines or testing for workers at most private companies, prompting an immediate threat of litigation by Arizona’s top two Republican elected officials.

The regulations announced by the Occupational Safety and Health Administration (OSHA) dictate that businesses with 100 or more employees must ensure that their workers are either fully vaccinated against COVID-19 by Jan. 4 or that they test negative for the virus at least once a week. They also would be required to wear masks when indoors.

About 84 million employees are affected.

Separately, the Centers for Medicare and Medicaid Services issued a rule requiring about 17 million health care workers to be vaccinated by that same Jan. 4 deadline. But unlike the mandate on other employers, there is no opt-out for those who would prefer to get tested instead.

“We believe OSHA doesn’t have the statutory authority to mandate the COVID-19 vaccines,” said Brnovich press aide Katie Conner. But she declined to say why, legally speaking, this is different than the agency’s power to mandate other health and safety regulations.

“We will not discuss our legal theories until our lawsuit is filed,” she said.

Conner, however, disavowed any claims that this lawsuit was going to be a joint effort with Ducey. “We are not working with the governor’s office,” she said.

That, however, did not keep the governor from issuing his own statement, declaring the rules not only a direct attack on personal liberty but also on businesses that keep the economy running.

“After the difficulties that COVID-19 has posed for individuals, businesses and the current workforce shortages, the administration should be assisting with getting them back on their feet rather than imposing more regulatory burdens,” Ducey said in his prepared comments.

Gubernatorial press aide C.J. Karamargin said Ducey has his own legal theory about why the rule is illegal. “There is no justification as to why, 18 months into this pandemic, the federal government has decided to take this action,” he said. “Why do it now?”

The “why” appears to be related to the president’s oft-stated frustration with the fact that, nearly a year after vaccines became available, so many people have chosen not to get inoculated.

There was a sharp drop in the number of COVID cases and deaths, both in Arizona and nationally, when the vaccine was first rolled out. The seven-day average of the number of new cases in Arizona actually dropped below 500 as recently as July.

Now that average is 2,684, and there is a similar trend nationally.

Biden had initially opposed any sort of government mandate. But in September, with vaccination rates lagging, he said in a White House speech that he was frustrated with the approximately 80 million Americans who are eligible for shots but have refused.

“We have been patient,” he said at the time. “But our patience is wearing thin, and your refusal has cost all of us.”

That prompted not just the OSHA and CMS rules but also the edicts on federal workers and those working for companies and entities with federal contracts.

The basis for the OSHA rules – those being challenged – is that agency has the power to issue rules that regulate workplace safety. That includes everything from hard hats and special shoes to respirators and other equipment.

Normally such rule making takes time. But the president directed OSHA to implement an “emergency temporary standard” and put it into effect.

That, however, still leaves enforcement ability – and a financial incentive for companies to comply. Firms that violate the rule can be fined up to $13,653 for what OSHA considered serious violations – and up to 10 times that for any repeat or willful violations.

Karamargin said his boss agrees with Brnovich that what Biden and OSHA are doing is beyond their legal reach. He said this is different than normal workplace hazard rules that are within OSHA’s authority. More to the point, he said there’s no epidemiological basis.

“The Centers for Disease Prevention and Control itself has identified the places most likely to be the source of the transmission as homes and mass gatherings, not workplaces,” he said.

Less clear is whether Ducey will take other action in an attempt to thwart – or at least delay – implementation of the rule here.

Arizona, along with 20 other states, has been given the authority to enforce federal OSHA regulations. But that requires them to enact their own rules that are at least as effective as what the feds want.

Karamargin said the state Industrial Commission, which operates the state worker safety program, will be preparing a response to the new federal rules. But he said he could not say at this point what that response will be.

There are, however, long-term implications to states ignoring federal rules. Arizona could lose its self-regulation authority, a move that would force employers here to have to deal directly with federal inspectors.

The new rules drew praise from Congressman Raul Grijalva, D-Arizona. He said people are uncomfortable risking themselves or family members in what could be unsafe working conditions. “Having unvaccinated employees harms businesses as workers fall ill, spread the virus in the workplace, and businesses are forced to close and quarantine for extended periods of time,” he said in a prepared statement.

But Danny Seiden, president and CEO of the Arizona Chamber of Commerce and Industry, said employers here already are doing what they can to slow the spread of the virus and protect workers and customers.

“Job creators are not looking to the federal government for advice on how to keep their workplaces safe,” he said in a prepared statement.

Seiden said he also is worried that the government enacting an emergency temporary standard for vaccines could set “a troubling precedent whereby the federal government could attempt to justify future cumbersome and expensive mandates on employers, combined with stiff fines.” And that, he said will “only extend and exacerbate the economic harm caused by the pandemic.”

Brnovich rushed to file suit in September, right after the president announced he was instructing OSHA to craft such a rule. But that claim ended up being premature as there actually was no rule to challenge.

He later abandoned that challenge, instead deciding to go after Biden administration rules requiring vaccines or testing of federal employees and entities that have contracts with the federal government, including state universities.

A hearing on his bid to block those is set for next week in federal court.