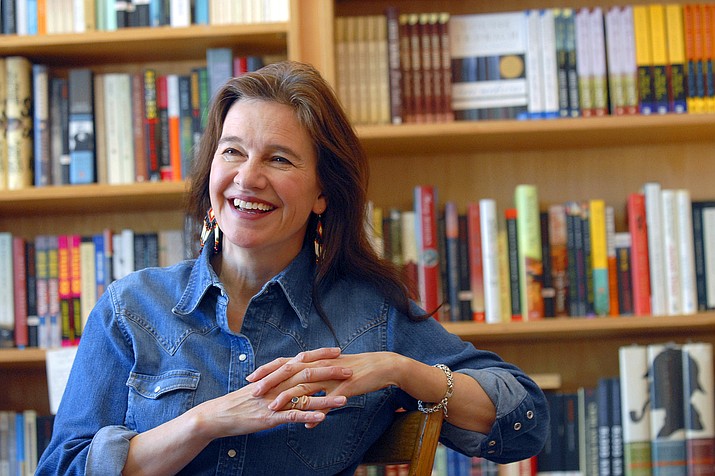 In this May 16, 2008, file photo, author Louise Erdrich reflects on growing up in North Dakota and her new book "The Plague of Doves" at her store BirchBark Books in Minneapolis. (AP Photo/Dawn Villella, File)

Storytelling has always been an Indigenous way of life, way of knowing.

From creation stories to contemporary fiction to television series, movies and more; Native people have always used storytelling as a medium and it continues to this day.

And there is no shortage of Native authors and creators putting out quality content to read or watch or listen to at one’s leisure.

Ojibwe author Louise Erdrich said it is thrilling to see so much representation of Native life throughout these spaces.

Erdrich, Turtle Mountain Band of Ojibwe, has had quite the career, publishing more than 25 books and winning the Pulitzer Prize in Fiction in 2021 for her novel, “The Nightwatchman.” The book is loosely based on her grandfather and information from letters he wrote during the termination era.

It was the first time Erdrich based her characters on real people, let alone her family members.

“It was really difficult because you somehow don't want to intrude too far into and imagine yourself into a person's consciousness, however, I had these letters,” Erdrich said.

Erdrich’s publishing company, Harper, described “The Nightwatchman” as “a majestic work of fiction from this revered cultural treasure.”

Much of her time these days is spent at her bookstore, Birchbark Books, in Minneapolis, Minnesota. Working in this capacity allows her to see all the up and coming Native writers across the country.

“These past years have been fantastic. I can't believe we have a flood of new writers, exciting writers and people who have been coming up in their writing,” Erdrich said. “It's been, honestly, in terms of the difficulties and the problems and the sorrows we've been through, this has been something that has lifted us all up. The number, the sheer number and the intensely interesting quality of these books, wonderful.”

Ironically, Erdrich’s next book, “The Sentence” is set in a haunted bookstore where an annoying customer won’t leave; even after death. The book is set to be released Nov. 9.

Outside of books, the latest biggest hit has been the television series, “Reservation Dogs.”

In a previous interview with Indian Country Today, show creator Sterlin Harjo, Seminole and Muscogee, discussed where he drew inspiration for the show and gave advice to up and coming Native creators considering putting their own stuff out there.

“I think it's super simple. It is ‘do it and don't stop,’” Harjo said at the time. “And you know, I'll share this advice because I had an art teacher in high school who shared this with me and it stuck with me and I've kept it until this day. He said, ‘Don't have a fallback plan because you'll fall back. If you really truly want to do this, do it.’”

The hit show has been picked up for a second season on FX on Hulu and Harjo said the fact that it has been so well received has been overwhelming and amazing at the same time.

Louise Erdrich's 'The Round House,' winner of the 2012 National Book Award, has won the American Book Award this year.

There is a long history of Native writers and it doesn’t appear to be slowing down any time soon. The abundance of topics covered by these writers may also be the first time some non-Native readers are learning about things like boarding schools or termination.

Erdrich said she hopes there is a positive impact for them when learning about the histories of such topics but she writes for a different audience.

“I can't help but feel that this really has an impact. However, I have to say my books are for other native people and that's where I derive the greatest satisfaction and writing.”