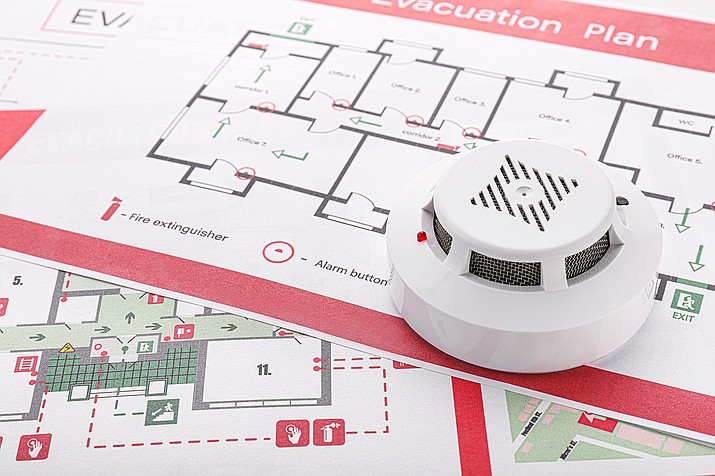 The American Red Cross and local fire departments urge homeowners to test their smoke alarms and install new ones when necessary. (Stock Photo)

KAYENTA, Ariz. — While fire prevention efforts on the Navajo Nation and Hopi reservation have been limited because of the coronavirus pandemic, they have not been entirely stalled.

This year, the American Red Cross urges homeowners to test their smoke alarms before the threat of home fires increases with cold weather.

“I believe we managed 60 over a period of two days,” Caudill said. “We’ve also built great relationships with the fire crew at Hopi and have had several successful installation days there as well.

The Red Cross has had to limit installation days on the reservations because of COVID-19 guidelines, however, she said they are looking forward to returning again soon.

Former Kayenta Firefighter Torrence Jones said he has worked with the American Red Cross on fire prevention efforts in the past, including offering smoke alarm installations for residents.

“Before the pandemic I set a goal for installing at least some smoke alarms on the reservation, which we did,” he said. “We installed 38 smoke alarms in one day around the community of Dennehotso.”

Jones said he hopes to offer more installations in the near future.

“I want to set another goal this year or next year to do that again on the reservation — my next stop is Kayenta, Tuba City and Chinle,” he said.

To accomplish that Jones is now working with the American Red Cross.

“We’re lacking volunteers so that brings a lot of questions as to how we are going to do it. Most of our volunteers are from south — Flagstaff and Phoenix.”

According to Jones, volunteers with the Red Cross play a variety of roles, including fire prevention efforts. They also have volunteers for the Red Cross’s Disaster Action Team (DAT).

“So if there’s a house fire on the reservation and the community reaches out for assistance, they should call that team to go to that location and help the family out,” Jones said. “They assess the situation and the home.”

Caudill said the Red Cross would like to have more volunteers on the reservation.

“Not only because it increases response times, but because people in the community know the community best and it really brings a sense of pride to the area when you have neighbors helping neighbors, so to speak,” she said. “Each year, we respond to a lot of home fire calls in the area, we’ve also responded to flooding.”

She said ensuring people have properly working smoke alarms is a big step in fire prevention. In the past, installing alarms also allowed volunteers and firefighters the opportunity to help families create escape plans for their homes.

“We gave out pamphlets and a dry erase where they can draw house, the exits and the windows,” Jones said. “We try to make them a plan and set a goal to exit the house within two minutes.”

Jones said fire prevention education and tips is important, especially on the reservation, where people heat their homes with wood stoves and burn other open flame products.

“Especially during the winter,” he said. “There’s a lot of families burning wood (stoves)... we talk to people about burning candles and that kind of stuff as well.”

Jones said Kayenta Fire has not responded to very many structure fires recently, but that could always change.

If folks have been displaced due to a fire, flood or other disaster, they can call the American Red Cross for assistance at 1-800-842-7349.

Those interested in volunteering with the American Red Cross can visit redcross.org or call Caudill at (928) 856-2417.

How to protect your family this fire season

Be sure to test your smoke alarms and practice your two-minute home fire escape drill — the amount of time that experts say you may have to get out before it’s too late.

• Place smoke alarms on each level of your home, including inside and outside bedrooms and sleeping areas. Test alarms monthly and change the batteries at least once a year, if your model requires it.

• Check the manufacturer’s date of your smoke alarms. If they’re 10 years or older, they likely need to be replaced because components such batteries can become less reliable. Follow your alarm’s manufacturer instructions.

• Include at least two ways to exit every room in your home in your escape plan.

• Select a meeting spot at a safe distance away from your home, such as your neighbor’s home or landmark like a specific tree in your front yard, where everyone knows to meet.

• Tailor your escape plan to everyone’s needs in your household. If you are deaf or hard of hearing, install strobe light and bed-shaker alarms to help alert you to a fire. When practicing your plan, include any devices or people that can help you to get out safely.

If you cannot afford to purchase smoke alarms or are physically unable to install one, the Red Cross may be able to help. Contact your local Red Cross Chapter for help. Due to COVID-19 safety guidelines, smoke alarm installations are limited to where they’re safe to do so.