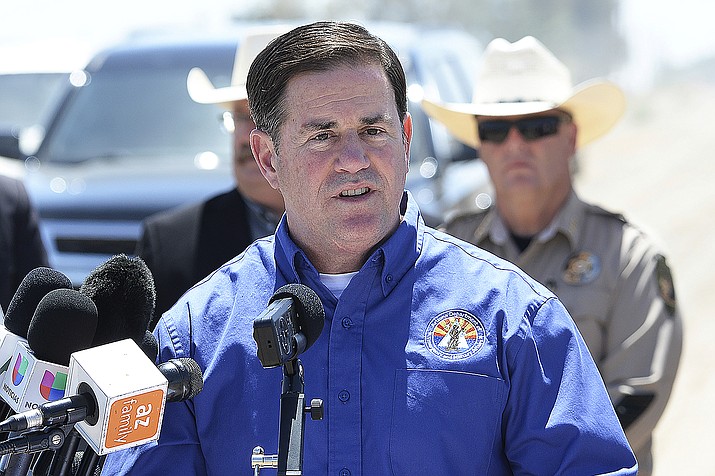 Arizona Gov. Doug Ducey addresses the media at the U.S-Mexico border in Yuma, Ariz, April 21, 2021. A budget deal struck between Republican leaders of the Arizona Legislature and Ducey includes implementing a flat 2.5% income tax that cuts $1.5 billion a year from state revenue and keeps higher earning taxpayers from having to directly pay a new 3.5% surcharge to fund schools. (Randy Hoeft/The Yuma Sun via AP, File)

PHOENIX (AP) — The group that represents Arizona's cities and towns told lawmakers on Tuesday that a proposed $1.5 billion-a-year state income tax cut would lower its members' share of revenue by more than $280 million a year and lead to cuts in services.

The opposition from the Arizona League of Cities and Towns is one of several stumbling blocks the tax cut package — the centerpiece of the $12.8 billion state budget proposal — faces as majority Republicans push to pass it this week. The League urged lawmakers to increase the share of state income tax that cities currently receive. Cities have received 15% of income tax revenue since 1972.

"This is the largest proposed cut to income tax revenues to cities and towns in over 50 years, at a time of tremendous economic uncertainty and at a time when the economy's been artificially infused with trillions of dollars in federal stimulus," Nick Ponder, a league lobbyist, told the House Appropriations Committee. He noted that economists who advise the Legislature in April cautioned about the risk of doing big tax cuts now.

"Cities and towns would prefer to be more conservative and heed the warnings of the experts," Ponder said. "However, if budget negotiators are set on ignoring those warnings we simply ask that they hold local governments harmless by increasing our percentage of income tax revenue."

Some majority Republicans vowed to deal with the concerns of cities and towns while saying they supported the tax cuts.

"There is a lot of good in this package," said GOP Rep. Joanne Osborne of Goodyear. "For me to be a yes on the floor the answer for the cities has to be addressed."

Republicans who crafted the new income tax proposal defended it and said that cities will do better because of the growth they contend will come from the proposed 2.5% flat tax the proposal contains. The proposal was hammered out between Republicans who lead the House and Senate and GOP Gov. Doug Ducey. It eliminates the state's four tax brackets and even affects the current bottom rate of 2.59%.

"What we're looking at is a pretty hefty budget surplus, and on top of that all projections are pretty rosy at this point and will continue to be for quite some time," Rep. Ben Toma, the Peoria Republican who led negotiations on the tax cut proposal. He pushed back on polling showing opposition to the cuts, noting other polls show it has backing.

"If we're actually going to look at a poll that's real and balanced and neutral, Arizona supports this and understands what the benefit is in the long term," Toma said.

The House Appropriations Committee advanced all 11 bills that make up the spending plan for the budget year that begins July 1, with all Democrats opposed and one Republican also voting no on the proposals. Rep. Jake Hoffman is pushing for cuts to spending that he believes were set too high.

Other opposition emerged to various components, including a provision that allows local school districts to mandate students and staff wear face masks. Republican Sen. Kelly Townsend said she will vote no unless the provision is stripped, and GOP Rep. Steve Kaiser of Phoenix said he too opposed the mask provision.

Democrats are unified in opposition because they believe the state needs to boost spending on schools, health care and other programs that remain underfunded more than a decade after the Great Recession forced massive state cuts.

"Planning for a massive tax cut of nearly $20 billion over 10 years based on this past year, which is the most unusual year we've had in the last 100, is absolute madness," Democratic Rep. Aaron Lieberman said.

Toma, the House majority leader, vowed to work to gain needed Republican support, saying he hopes to bring the budget plan up for a vote on Wednesday.

With just a one-vote margin in each chamber, one Republican member can sideline a deal. And several GOP members in both chambers say they won't vote for the plan without changes — some major. None are more vocal than Rep. David Cook of Globe. He said the budget is being rushed and he wants more time and more changes.