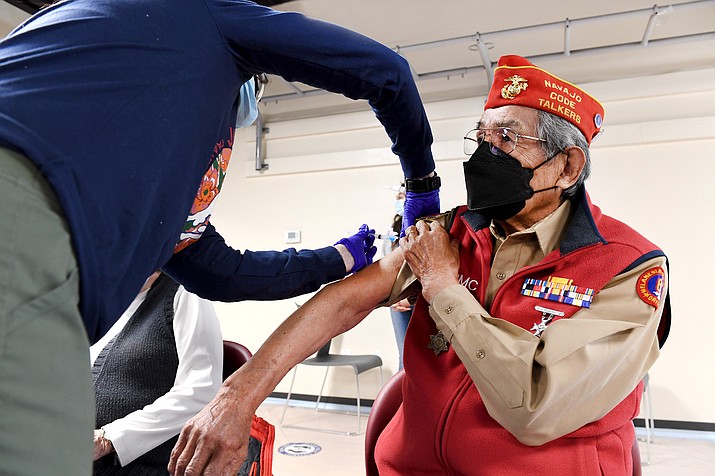 By Joshua Lavar Butler, for the Navajo-Hopi Observer
Originally Published: May 25, 2021 7 a.m.
Tweet

FLAGSTAFF, Ariz. — The COVID-19 pandemic has ravaged the Navajo Nation in the past year and the only remedy to defeat this “enemy” is by getting the vaccine according to Peter MacDonald Sr., former tribal chairman and Navajo Code Talker.

From his home in Tuba City, Arizona, MacDonald spoke by phone in late March about the need for everyone to do their part to combat this virus that he says, “came upon us so quickly.”

Like many others, MacDonald and his wife Wanda have been safely secluded at home, away from potential threats of the virus in the last year. He said it has been tough on them, its been lonely and they had to endure many sacrifices to remain healthy and do their part to stop the spread of the virus.

MacDonald said many people have suffered greatly, including personal challenges and loss of loved ones. He said many others are experiencing mental health issues because of the pandemic. He said the pandemic has negatively impacted all facets of society.

For him, the vaccine means the beginning of the end to the COVID-19 pandemic. He is thankful for the vaccine because it makes it possible to return to some level of normalcy and he is anxious to visit family, friends and community members, and the overall return of society. But he also knows it will take some time to reach that point.

“We can get back to being together [again]. [The] Navajo Nation and other people around the world are very much family oriented. We used to visit each other almost daily,” he said. “We miss that now. It is important [that] we do things that need to be done in order to get back to that time.” 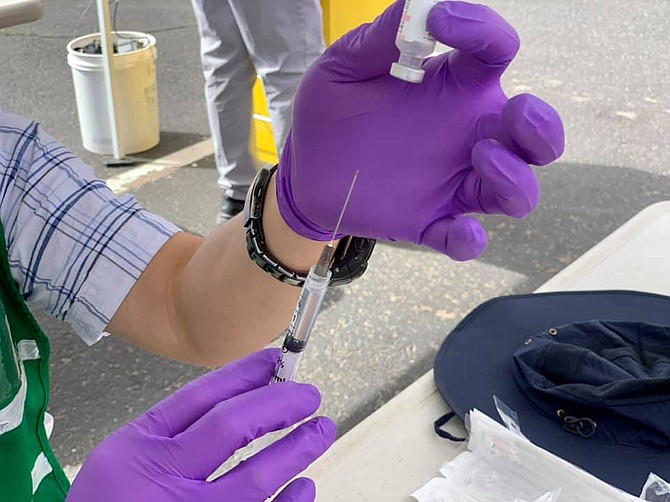 The COVID-19 vaccine continues to be distributed in healthcare facilities across the Navajo Nation. (Photo/Office of the Navajo President)

MacDonald said he recently had a conversation with another elderly Navajo man who said he cannot wait until this pandemic is over. The elderly man explained he and his wife used to have their sheepskin bedrolls right next to each other because they loved each other. Because of the pandemic, they are forced to be at least six feet away from each other.

“[He] wants to be able to get back to where [his] sheep skin is right close to [his] wife’s [sheep skin],” MacDonald said. “It is not far from the truth. To be separated and not being able to shake hands, that is really a big problem for all of us.”

“So, the sooner we follow the rules and regulations given to us by health authorities and by our leaders, we can all get back to living together like we were before this pandemic flu hit us,” he added. “Let us all get together and fight this war against [it]. I know we will win.”

To overcome this pandemic, MacDonald urges people to continue to heed advice of leaders and public health care professionals advocating for the wearing of masks, washing hands frequently and to social distance.

He knows many are tired of self-isolation and being home but he said continued sacrifice is needed to defeat this enemy. MacDonald knows a few things about defeating enemies, he returned home in the late-1940s a war hero after serving in the U.S. Marine Corps where he served as a Navajo Code Talker from 1944 to 1946.

He said making sacrifices was the theme at that time, which meant soldiers left home to defend their homelands and families saw loved ones depart for war and many never returned. Supplies and food became scarce as resources were diverted elsewhere, which meant families learned to sacrifice and ration foods and other simple luxuries. During this period of time, people learned the true meaning of sacrifice and duty.

“We have done it before in time of great danger during World War II. We all had to sacrifice,” he said. “We all sacrificed in order to fight the horrible war.”

MacDonald sees this pandemic in a similar fashion of fighting in a war and believes the Navajo people should fight with the same spirit that helped them win WWII.

MacDonald and his wife received their second COVID-19 vaccine March 30, he said he sees it as a duty that he does not take lightly. For those unsure about receiving the vaccine, MacDonald encourages them to seriously consider getting it as soon as possible.

“My message to the people, not only here in Tuba City but throughout the Navajo Nation is to get vaccinated,” he said. “Don’t be afraid, don’t listen to other people that may say, ‘Don’t get vaccinated or to wait.’ Don’t wait, get vaccinated because it’s what’s going to help win the war against his horrible disease.”

He thanked the many frontline workers and healthcare providers that continue to fight and he urges people to continue to be extra vigilant.