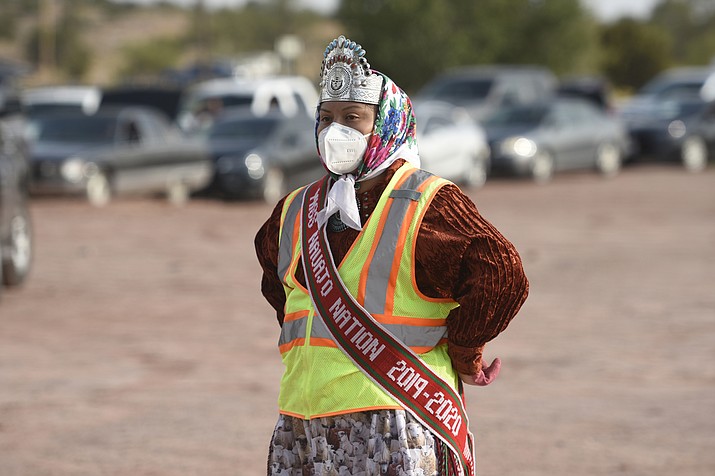 This photo of Miss Navajo Nation distributing food at Ganado, Arizona Oct. 2, 2020 is part of the National Museum of the American Indian's “Developing Stories: Native Photographers in the Field” series. (Photo/Navajo Times, 2020 via Smithsonian)

WASHINGTON — The Smithsonian’s National Museum of the American Indian is releasing the third installment of its online exhibition series “Developing Stories: Native Photographers in the Field” May 18.

“The COVID-19 Outbreak in the Navajo Nation” is a series of 44 images created by photojournalist Donovan Quintero (Navajo).

The photo essay explores how the pandemic affected the everyday lives of the Diné over the course of a year. The images highlight the resilience of the Diné and the critical roles played by tribal council members, police, health-care workers and other unsung heroes of the pandemic. The essay concludes with the rollout of the vaccines and Diné prayers for the future.

The photo essay also features an audio interview between Quintero and Cécile Ganteaume, the exhibition’s curator.

Quintero was born and raised on the Navajo Nation reservation. Since 2005, he has worked for the Navajo Times covering news, sports and feature stories. He served in the U.S. Navy and traveled widely before returning to his roots. Quintero got his start in journalism at the Gallup Independent and the Farmington Daily Times, both in New Mexico. He has covered the pandemic since it first struck the reservation in March 2020.

“Developing Stories: Native Photographers in the Field” is a series of photo essays created by Native photojournalists in collaboration with the National Museum of the American Indian. Each photographer explores an issue that is of deep personal interest and touches the lives of Native people in a specific community. The essays feature poignant and compelling photography and together provide thought-provoking insights into contemporary Native life and nuanced perspectives on an American experience that is largely invisible to mainstream society.

“Developing Stories: Native Photographers in the Field” is curated by Cécile R. Ganteaume. Collaborators Tristan Ahtone (Kiowa), editor-in-chief at the Texas Observer, and John Smock, director of photojournalism at the Craig Newmark Graduate School of Journalism at the City University of New York, provided editorial and technical expertise to the museum and photographers throughout the development of each photo essay.

In partnership with Native peoples and their allies, the National Museum of the American Indian fosters a richer shared human experience through a more informed understanding of Native peoples. The museum strives toward equity and social justice for the Native peoples of the Western Hemisphere through education, inspiration and empowerment.