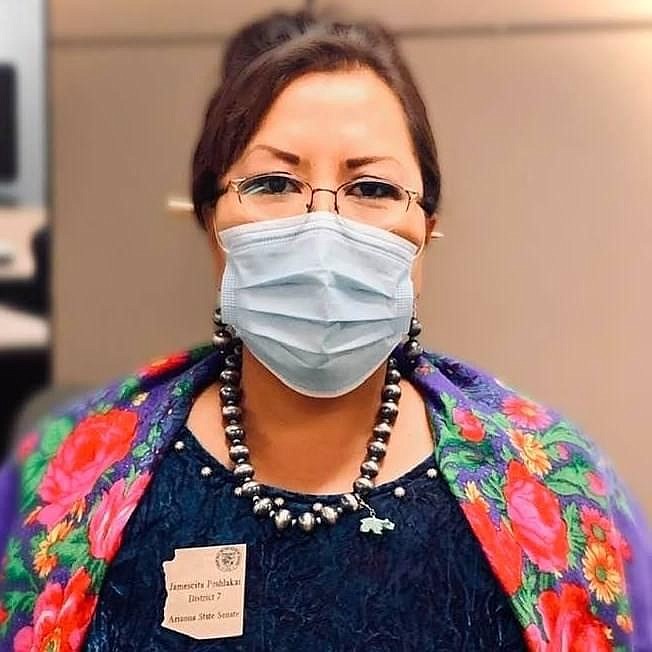 FLAGSTAFF, Ariz. — Arizona State Sen. Jamescita Peshlakai (D — Window Rock) is seeking $5 million for the Tuba City branch of Diné College, $3 million for a laboratory at Navajo Technical University in Chinle and more money for education funding in general, but it is too early in the budget process at the state legislature to tell if these proposals will be approved.

Peshlakai represents Legislative District 7 in the state legislature, which includes the Navajo Nation and the Hopi Reservation.

Peshlakai congratulated all graduates as well as their grandparents, parents and everyone who supported their education.

“I am honored for the opportunity to represent LD7. I am hopeful and positive for the coming year. My best wishes to everybody because we’re all in this together,” she said.

Peshlakai said there is more tension in the state legislature this year than her previous years there. This is her fifth year in the state Senate and she spent two years in the House of Representatives before that.

One proposal Peshlakai supports that may get passed, because it has bipartisan support, involves unemployment benefits.

“One of the things the pandemic showed is a rise in the unemployment rate,” she said.

Peshlakai said a lot of her constituents never received answers to their applications for unemployment funds. She said during the pandemic many people applied for unemployment benefits, which then created a backlog.

“Their applications were just put on a pile and never looked at,” she said.

Peshlakai said some people didn’t received a response for several months and they would be on the phone for hours trying to get a response. Some people had phone cards whose minutes ran out while they were waiting.

Peshlakai’s bill calls on applications to be answered within 21 days and if someone is turned down, they would then have the right to appeal.

“There has to be a solution to this,” she said. “I believe this is moving forward.”

Peshlakai has concerns about a proposal for an open enrollment bill that would allow parents to take their students to schools over jurisdictional lines. She said while that may make sense in some locations that doesn’t make sense for rural Legislative District 7, where everything is so spread out.

“There is a lot of contention among school districts,” she said. “Some schools would lose funding.”

Peshlakai said according to this proposal, school districts would get $80 per month per student for those who want to cross school jurisdiction lines. She said while this would be okay for Maricopa County, it wouldn’t work for those living on the reservation. For example, if a student wanted to come from the reservation to Flagstaff for each school day then the $80 could be used up in one trip.

Schools receive funding based on the amount of physical bodies in the classroom. Since the pandemic schools lost a lot of funding.

“That’s wrong when people are forced to stay home,” Peshlaki said. “At some point, school districts will have to get back on their feet. Its been an unusual and difficult year for students and families.”

Peshlakai urges community members to call the Governor’s Office, the Senate President and House Speaker’s office with their concerns. She said when the pandemic hit the reservations that state officials said they wanted to help Navajo and Hopi, but now they say the reservations should turn to federal funding.

“That’s BS,” she said. “We need stronger representation for the tribes.”

Peshlakai said because of the pandemic, tribes were undercounted during the census, which means less funding and less representation for them. She said Native American voting rights are being attacked by Republicans — they have voted to do away with early voting.

“Republicans have put their thinking cap on with ways to put more obstacles up. Every Arizonan should thank their lucky stars that tribes came out to vote in the last election because we made a difference,” she said. “I’m proud of the tribes.”

Peshlakai calls the ongoing audit of the last vote in Arizona ridiculous.

“These are delusional people that can’t face reality. The people have spoken and their standing by the big lie,” she said. “It creates conflict and doubts at a time when we should be deliberate about protecting our democracy.”

Peshlakai said Native Americans should be thinking about running for statewide, county and city offices.

“We need to step out of our limitations,” she said.

Peshlakai said one bill that received bipartisan support was the recognition of Navajo Code Talkers — it passed the House and Senate unanimously.

Peshlakai said the reservations do not get enough attention from the state legislature. She said it’s a balancing act between being respectful of her fellow legislators while advocating in a strong manner for the reservation.