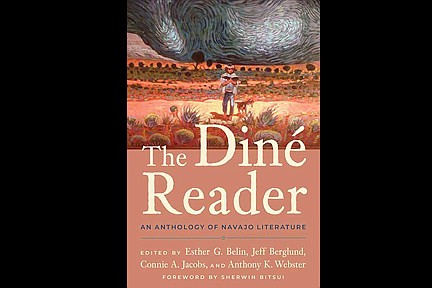 ‘The Diné Reader: An Anthology of Navajo Literature.’(Cover art work by Shonto Begay)

FLAGSTAFF, Ariz. — The editors of a new book that includes a 100-year span of Navajo writing are hoping the Native voices will help change the many misconceptions of the Navajo people.

‘The Diné Reader: An Anthology of Navajo Literature,’ born out of a 20 year friendship, was featured at the Northern Arizona Book Festival this year.

It is edited by Esther G. Berlin, Jeff Berglund, Connie A. Jacobs and Anthony K. Webster, with a forward by Sherwin Bitsui.

Bitsui said most non-Native audiences he speaks to learn about Navajo culture by recalling how Diné bizaad (the Navajo language) helped the United States defeat the Japanese in WWII. Bitsui said non-Native audiences also have an idea about some Navajo traditions by the textiles and turquoise jewelry they have seen. Others have heard of author Tony Hillerman and his detective series, which features Navajo characters and criminal situations around the Four Corners area.

"I'm always stunned by such misunderstanding; how regularly Navajo people are misrepresented and wrongly portrayed in the world," Bitsui said. "It's also baffling how such books can mislead audiences to assume that a Navajo person authored those works."

During those exchanges, Bitsui said he offers the names of many of the Navajo authors included in 'The Diné Reader: An Anthology of Navajo Literature.'

"These are the voices they should be reading if they want to understand the worldview and story of our people," Bitsui said.

As the book was introduced at the Northern Arizona Book Festival, Berlin, the other editors and the Navajo writers, said they were stunned the book finally came into the world.

“It’s new in a different way. We’re working with 33 authors…I think we’re inspired by the fact that so many people share our excitement about this work, which really continues to confirm its importance as a book and also within our tribe," Berlin said.

Berlin said the book has about a 100 year span of Navajo writing, arranged chronologically according to first publication, as well as could be determined.

“I think there are a lot of unique qualities from a book [that spans so much time.] It really is special in that way,” Berlin said. “From the beginning, the Navajo people, the students were really the focus of this book.”

Berlin said students, especially those in beginning composition classes, are faced with a western structure of what and how to write — an accepted form of writing that doesn’t always work for everyone, especially Native writers.

“That’s who we’re really speaking to,” Berlin said. “I think we’re right at the breaking point where we have enough writers who are willing to write, gauge and produce work and talk about work in a way that’s different. I think some of the early boarding school writers weren’t able to talk about their craft for various reasons.”

Berlin said, even some of the earliest Diné writers, like Gloria Emerson, wrote out of the necessity of writing.

Berlin said that contribution lays a strong foundation for new writers and that’s what ‘The Diné Reader’ is about as it engages with its own history and shows how writers have not only continued to battle with the English language but also to make it their own, within all educational and professional capacities.

“That’s the real emotional draw for all of us,” Berlin said. “It took a while, but it took it’s time. If we’d published it even a year earlier, we would have missed out on some of the great voices that are in the book.”

“It’s our sincere hope that others reading this book will look for earlier writers, will document earlier writers and restore them, if appropriate, to the public record of our knowledge of that deeper tradition,” Berglund said.

One of the poems in the introduction to the book is an example that Berglund wanted to highlight, written in 1937 by an unnamed elementary school student in Tohatchi, New Mexico in a collection called ‘The Colored Land: A Navajo Indian Book.’

I would run away from school,

And I’d gallop on the mesa

And I’d eat on the mesa,

And I’d sleep on the mesa,

And I’d never think of school.’

Berglund said the writing in the book represents some of the first published writing by Diné writers.

“This is an example of subversion of the assignment itself and of the very role that writing and the so-called assimilation project,” Berglund said. “It’s pitiful that they weren’t accorded the status of author with their name. The book is filled with illustrations from other Diné students from a school in Sante Fe.”

Berglund said ‘The Diné Reader: An Anthology of Navajo Literature’ is a collaboration in a way that ‘The Colored Land’ wasn’t.

“It’s our hope that this book does justice to those undocumented voices, those unknown voices and it will engage us all in what it meant to be a writer in these earlier eras when their work may not have been recognized,” Berglund said.

"These poems and stories are as vast and dynamic as the land on which they were imagined and created," Bitsui said. "The editors of this anthology have presented the works in a format that honors culture. They have provided interviews with the authors and resources for teachers to aid in the teaching of these works, elucidating the cultural context to bring greater depth to the reader's understanding."