MMIW: Known and not forgotten
Navajo and federal leaders recognize missing and murdered Indigenous women May 5 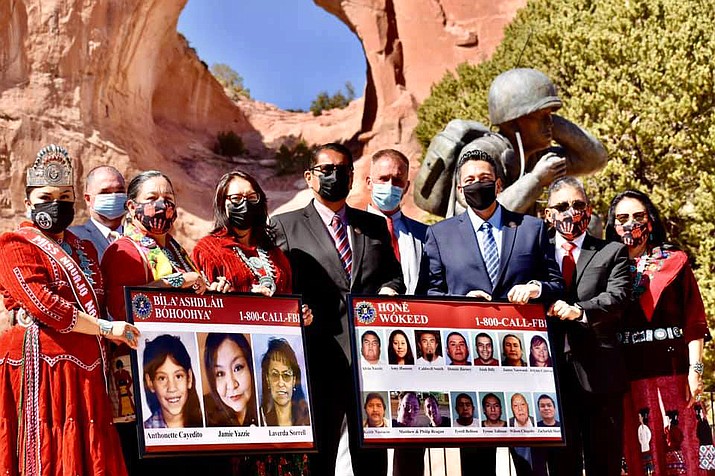 Above and below: Navajo leaders, FBI officials and members of the public take a moment to recognize MIssing and Murdered Indigenous Women Awareness Day May 5 in Window Rock, Arizona. (Photo/Office of the President and Vice President)

PHOENIX — Hanna Harris would have been 29 years old on May 5.

In 2013, the Northern Cheyenne woman went missing, was murdered, and found on the tribe’s reservation. Back then she was 21 with a 10-month-old son.

The cry for action by her community led to combined efforts across Indian Country to bring awareness to the crisis affecting families, including the national day of awareness to honor Indigenous people who go missing and are murdered. 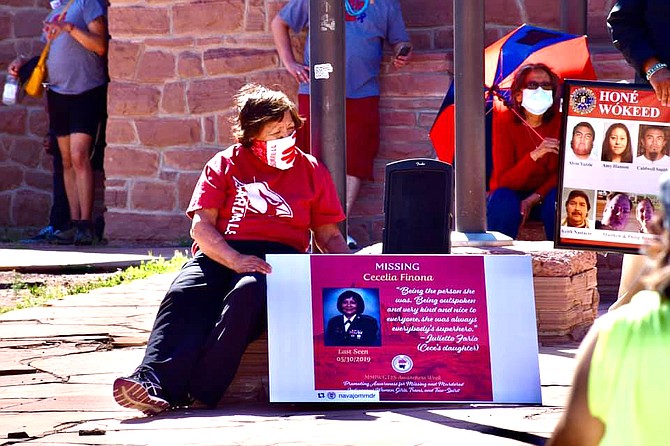 Navajo leaders recognize Missing and Murdered Indigenous People Awareness Day in honor and remembrance of lost loved ones May 5. (Photo/Office of the Navajo President)

The second incident: Tammy Begay, 23, was stabbed to death by her boyfriend.

Tammy Begay was “the sweetest person you could ever meet,” her sister Stephanie Begay told the Missing & Murdered Diné Relatives task force. She was close to completing her dental hygienist program.

The statistics of missing and murdered Indigenous women in the United States, Canada and inclusive to all of Turtle Island is startling and troubling.

On some reservations, Native women are murdered at a rate 10 times higher than the national average, according to the National Institute of Justice. Eight-four percent of Native women have experienced violence in their lifetimes and the number of known incidents of missing and murdered Native American women in 2016 was 5,712.

“In response to the crisis of MMIWG, grassroots actions to honor and call for justice for missing and murdered Indigenous women and girls have increasingly grown at the local, regional, national, and international levels. Many of these grassroots efforts have lifted May 5t as a National Day of Awareness for MMIWG,” according to the National Indigenous Women’s Resource Center.

In August 2017, Savanna LaFontaine-Greywind was murdered by her neighbors, a couple who wanted her baby. Though the couple was convicted of multiple charges, the murder charges against the male assailant were lifted and are pending resentencing.

The murder of LaFontaine-Greywind sparked an international outcry for justice and increased awareness of the plight faced by Indigenous women and girls in the United States.

The legislation directed the U.S. Department of Justice to develop law enforcement guidelines and improve tribal access to federal databases. Heitkamp also introduced the Not Invisible Act, S. 982, a bill that worked to coordinate prevention efforts between the secretary of the U.S. Department of the Interior and victim service organizations and would create a joint advisory commission to reduce crimes against Native people.

Heitkamp’s term in the Senate ended before the passage of the bills. Alaska Sen. Lisa Murkowski made good on a promise and reintroduced the bills, which eventually passed in 2020.

Curtison Badonie, the Media & Communications Coordinator for the Coalition to Stop Violence Against Native Women said of the continuous legislative efforts in relation to MMIWG, “We remain grateful to the families and organizers, our aunties and grandmas, sisters and advocates who have brought so much awareness to MMIWG. It is because of their tireless efforts that we have a day dedicated to our missing loved ones. And although we are seeing system response from DOI, state task forces and policymakers — there is still a lot of work to do, especially for the families and communities who need support.”

In a society where three out of five Native women have been physically assaulted in their lifetimes, and one in three will be raped in their lifetimes, the majority of assault and violence against Native women are by non-Native offenders, according to a previous Indian Country Today report, 'A Comprehensive Report on MMIW: The Curiously Different Tales of Violence against Indigenous Women On Both Sides of Turtle Island.'

More than 80 percent of sex crimes on reservations are committed by non-Native men immune from prosecution by tribal courts. While sex crimes against non-Native women are largely intra-racial, those against AI / AN women are more likely to be interracial with the majority of offenders described as being White.

The incidents of violence against Native women and girls are systemic, says StrongHearts Native Helpline, which is known as a strong advocate for Indian Country in relation to the tragic impacts of domestic violence, sexual violence and missing and murdered Indigenous women and girls.

“Through colonization, Native women were devalued by non-Native people. They were degraded, they were attacked and raped. Acts that still continue today. Tribal communities still experience high rates of rape and sexual assault, largely committed by non-Native perpetrators. Native women are sexualized in the media — in costumes, in Native American imagery and caricatures, and in movies,” the agency wrote to Indian Country Today in an email. “Native women and men still struggle from the effects of colonization, marginalization and assimilation and our shared trauma. Over half of Native women, in particular, have been physically abused by an intimate partner.”

One of the biggest strikes against women and sovereign tribal nations was the Supreme Court decision in 1978 in Oliphant v. Suquamish Indian Tribe. The case, in a 6-2 majority decision, maintained that tribal courts would have no jurisdiction over non-Indian offenders.

According to many experts and advocates for Indian Country, the decision opened up a floodgate for potential criminals that committed crimes in tribal territories. It wasn’t until the introduction of the Violence Against Women Act that some tribal law restrictions were lifted. But the lifted restrictions are extremely limited.

Paula Julian, an Indigenous Filipina woman and senior policy specialist for the National Indigenous Women’s Resource Center — with over 25 years of experience working on violence against women issues and Native women’s issues — told Indian Country Today that the years of 1978 through 2013 (the passage of the VAWA act) were extremely problematic for Native women.

“Between 1978 to 2013 we were in the predator’s pool. It was the predator’s game. When mothers had to talk to their daughters to prepare them to be raped. It’s not a question of whether or not you will be raped or assaulted. It’s a question of when and how many times. So from 1978 to 2013, that was the reality, preparing children, preparing young girls and young women for being assaulted, raped, trafficked and potentially going missing and murdered. And that was because of the purposeful, intentional erosion of tribal sovereignty through federal laws that basically compromised local authority to respond, especially in non-Indian cases,” Julian said. “We hope that this new Congress will continue to strengthen the expansion of tribal jurisdiction over non-Indian offenders to include the other crimes of violence against women, not just domestic and dating violence or violations of protection orders."

On April 22, Interior Secretary Deb Haaland, Laguna Pueblo, announced she would be moving forward to implement the Not Invisible Act, which meant establishing a joint commission to reduce crimes against Native people.

“A lack of urgency, transparency and coordination has hampered our country’s efforts to combat violence against American Indians and Alaska Natives,” Haaland said. “In partnership with the Justice Department and with extensive engagement with Tribes and other stakeholders, Interior will marshal our resources to finally address the crisis of violence against Indigenous peoples.”