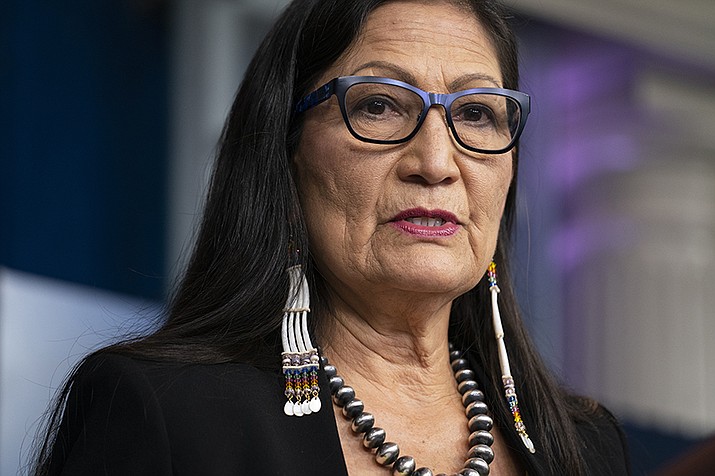 Haaland announced April 27 steps intended to speed up the transfer of private lands into federal trust for the benefit of Native American tribes. (AP Photo/Evan Vucci)

Interior Secretary Deb Haaland issued an order that allows regional Bureau of Indian Affairs officials to approve the transfer of private land that’s not on a designated reservation into federal trust for tribes. Putting land into trust gives the federal government legal title to the property, while allowing tribes or individual Native Americans to use it for their own interests and not have to pay state and local taxes.

Interior officials in 2017 set a policy that said off-reservation trust land decisions had to be made by the assistant secretary at the agency’s headquarters in Washington.

The change was opposed by the National Congress of American Indians, which said it would freeze off-reservation acquisitions and had been adopted without tribal consultation.

Haaland said in a statement that rescinding the policy will empower tribes to determine how their land is used.

“We have an obligation to work with tribes to protect their lands and ensure that each tribe has a homeland where its citizens can live together,” said Haaland, the first Native American to lead a White House Cabinet agency.

The order and a pair of related legal opinions issued by Interior Deputy Solicitor Robert Anderson are meant to speed up decisions on more than 1,000 pending applications from tribes across the U.S. seeking to put more than 200,000 acres of land into trust. Applications sometimes lingered for years, costing tribes hundreds of thousands of dollars in legal expenses and other costs, officials said.

Anderson also withdrew an opinion issued in Trump’s last day in office that said Interior didn’t have authority to take land into trust in Alaska.

Whether land is in trust has broad implications for whether tribal police can exercise their authority, for tribal economic development projects to attract financing and for the creation of homelands and government offices for tribes that don’t have dedicated land.

“Tribal nations care for the social needs of their people, whether that’s housing, health care or education,” said Lance Gumbs, an ambassador for the Shinnecock Indian Nation on Long Island, which was formally recognized by the federal government in 2010 after a 32-year campaign.

There are 574 recognized tribes in the U.S. and 326 reservations, villages, rancherias and other designated homelands, according to the Bureau of Indian Affairs.

Some reservations have multiple tribes but not every tribe has land of its own. Many reservations are just remnants of a tribe’s original land base.

Gumbs, who is also a board member of the National Congress of American Indians, said the now-cancelled policy for approving land transfers had injected more delay and uncertainty into the process and added to costs for tribes.

“Land is everything....It makes it very difficult for tribes to take care of their people without this very important component,” he added.

The Trump administration put 75,000 acre into trust over four years, versus more than 560,000 acres in the eight years of the Obama administration, Interior officials said.

The trust land system was adopted in 1934, when Congress passed the Indian Reorganization Act in response to more than 90 million acres of tribal homelands that had been converted into private land under the 1887 Allotment Act.

Approximately 56 million acres are currently in trust. Combined that’s an area bigger than Minnesota and makes up just over 2 percent of the U.S.