Native poets have a home at Museum of Northern Arizona 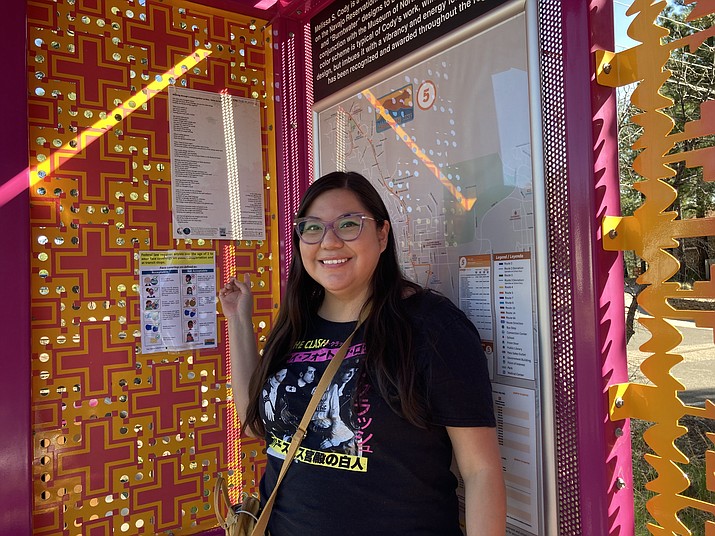 Amber McCrary points to poetry hanging up at the Museum of Northern Arizona’s bus stop. The bus stop was designed by Melissa S. Cody, a Diné weaver.(Katherine Locke/NHO)

FLAGSTAFF, Ariz. — Amber McCrary, founder of Abalone Mountain Press, collaborated with the Museum of Northern Arizona on a project called Poetry on the Plateau to display poetry by Native writers throughout the museum.

It’s not the museum’s first time displaying poetry by Native writers. In 2019 and 2020, Northern Arizona University poetry students wrote poems inspired by art on exhibit, according to the museum. The art was either displayed alongside the art or published as a downloadable chapter book, with a series of videos combining the art with poems.

In 2019, as with this year, the museum reached out to Indigenous poets to put their poems throughout the museum.

“This is an opportunity to collaborate with a new local press that is focused on lifting up Native writers, to extend our mission by interpreting the Colorado Plateau through another art form, to showcase and utilize more of our outdoor spaces at a time when people will still feel more comfortable outdoors,” said Marketing Director Kristan Hutchison.

McCrary, a poet herself and a board member for the Northern Arizona Book Festival, said she knew some of the poets that she picked but also she worked with a lot of them through the Emerging Diné Writers Institute at Navajo Technical University at Crownpoint, New Mexico.

“A lot of them are up and coming Diné writers, but then also I saw some of the other writers at reading events, like Tracey [Sekayumptewa], I heard her read and I asked her to submit something. Another poet introduced me to Lance [Tubinaghtewa]. I was really excited because Lance is a great writer.”

Several poets provide recordings of themselves reading their poetry, which people be listened to by scanning a QR code.

McCrary said selecting poets who speak to the Indigenous experience and connection to the land is important.

“Even if a Native person is not a writer. Or if they like writing but maybe they’ve never seen a Native writer, it just promotes more visibility in their local area,” McCrary said. “It also helps the local community, too.”

It also is important for McCrary to help others have their work get more exposure in the same ways that she was helped by people on her journey.

“I had the same where other established writers have helped me, so I just wanted to continue that by helping other emerging writers who might not know where to start, who are living on the rez and just don’t have access to publishing presses or getting their poetry out,” McCrary said.

The poems can be found throughout the museum and also in the Colton Community Garden and ethnobotanical garden on the administration/research side of the museum’s campus.