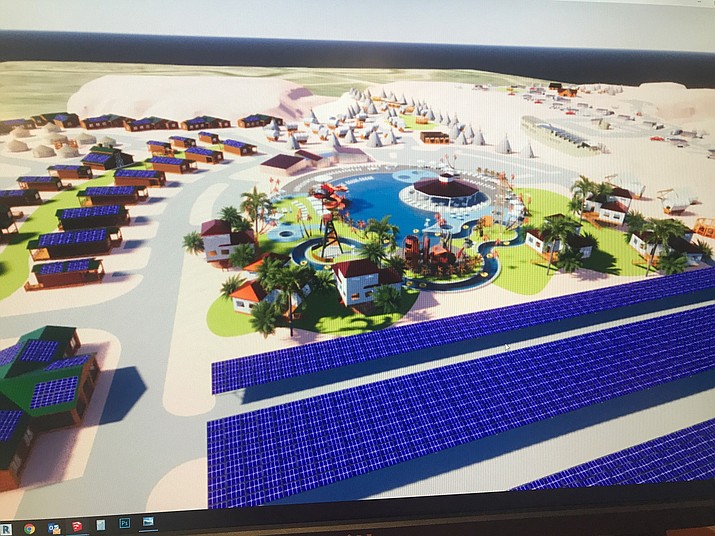 A make-up of the proposed resort. The Coconino Board of Supervisors will decide on a rezoning permit May 12. (Submitted photo)

TWO GUNS, Ariz. — On May 12, the Coconino Board of Supervisors will make a decision on a proposed glamping resort at Two Guns, Arizona.

Developer John D. Gunderman has big dreams for the 232 acres at Two Guns, located between Flagstaff and Winslow, if the Board of Supervisors authorizes a zoning change for the luxury resort. Other amenities in the area include Twin Arrows Navajo Casino Resort, the new Navajo Blue Travel Plaza and Meteor Crater.

Luxury camping would include teepees, cabins, yurts, tree houses to wagons — but this isn't typical camping, it is luxury camping with king sized beds, heat and access to bathrooms. The resort would include a cliffside (of Canyon Diablo) motel and bistro, vintage airstream campers, RV sites, equestrian resort, water parks, mini golf, a drive-in theater and a diner named after his mother.

Gunderman said he also wants to highlight Hstoric Route 66, which runs through the property. He said he wants to pay tribute to the Native Americans and envisions an Indigenous marketplace with a profit sharing component for Indigenous people in the program.

During an earlier Board of Supervisors meeting, Gunderman's luxury ideas ran into issues specifically with Supervisor Lena Fowler, who questioned whether teepees and wagons honored the Navajo people who have a long sometimes painful history with those sorts of images.

Gunderman said during a site visit April 22, that his intention never was that.

"It has never been a cowboys and Indians thing," Gunderman said. "It's a glamping resort."

He said he has decided luxury teepees will be dedicated to the Plains Indians, to distinguish between the tribes of the American Southwest, who did not use them traditionally.

While the Board of Supervisors did advise him to reach out to various tribes in the area and to tribal museums and the cultural center on Northern Arizona University campus, Gunderman said outreach has been difficult and he has not heard back from the tribes.

Gunderman said he has attempted to address Fowler's concerns and has reached out to other board members, particularly Supervisor Judy Begay, since the project is in her district.

Begay would not directly comment on a project that will be coming before the board.

“As a supervisor, I aim to be well-informed and impartial so that I may make a decision in the best interest of our communities," Begay said in a statement. "I look forward to hearing from the developers of the Two Guns site at the upcoming hearing with the Board of Supervisors, and appreciate the work they’ve done to address cultural and local concerns.”

Two Guns is located on the east rim of Canyon Diablo. In its time, it was a tourist stop along Route 66.

It is also the site of what is known as the 'Apache Death Cave,' where both Navajo and Apache people died.

The structures that mimic Hopi dwellings were built in the 1950s as a tourist attraction. It once housed a mountain lion zoo and had a gas station and KOA in the 1970s. All those projects came to tragic ends, which Gunderman knows. He said he has much to learn about the community that surrounds the property.

"I don't see how I can make everybody happy, but I can learn and show respect," Gunderman said. "I'm coming out here to become part of this family. We want to make a difference."

That difference will come in employment and money coming back into the community and different charities, which is a selling point for Winslow Mayor Roberta Cano.

"I think the project is phenomenal," she said. "Not only will it bring attention to the area, but the potential for ecomic impact and for people to be able to work and be close to home, is important for tribal communities. I think issues of cultural sensitivity are real, but that [John] can tweak [the project to work them out."