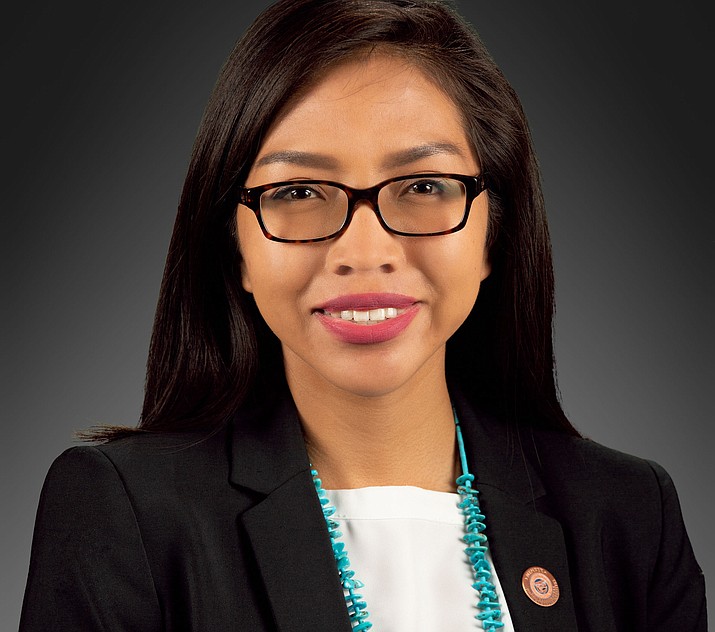 Arizona State Rep. Jasmine Blackwater-Nygren took over Arlando Teller’s seat after he was appointed by the Biden-Harris administration. (Submitted photo)

PHOENIX — Arizona State Rep. Jasmine Blackwater-Nygren (Dem.) points to successes this year since she took over her seat from Arlando Teller, who was appointed to the transportation department in the Biden-Harris administration.

As a freshman legislator, Blackwater-Nygren said she has nothing to compare this year to past years.

“But it’s going well. There are a lot of bills to benefit tribes,” she said.

As a freshman, Blackwater-Nygren had emphasized the importance of supporting bills Teller introduced.

“It’s important for me to continue his legacy,” she said.

A priority for Blackwater-Nygren is following Teller’s proposal to see Hopi Route 60 funded for paving. The road, which goes from Low Mountain to Polacca, has needed paving for decades.

“The road is in desperate need of repair,” she said.

While Blackwater-Nygren and Teller are both Democrats, she said she likes to work with legislators from both sides of the aisle.

“I want to build on those relationships and foster those relationships. With Republicans in the majority, we cannot get anything done unless we work across the aisle,” she said. “Teller did that well and I want to keep that going. Some bills passed that we do not believe in, but we have to navigate through this and that is interesting.”

Blackwater-Nygren points out her district includes Hopi, Havasupai, Hualapai, San Carlos Apache, White Mountain Apache, Zuni and Southern Paiute. She respects tribal sovereignty and defers to those tribes on issues that impact them such as the sports betting compact.

Blackwater-Nygren is concerned about voter suppression laws that impact all tribes.

“Native Americans have the lowest voter turnout of any minority and any voter suppression bills will make it worse,” she said.

“As Democrats, we’re strongly in opposition to these bills, but with Republicans in the majority it’s hard to combat,” she said.

“We’re always pushing for more funding for schools, but as the minority we do not have a say,” she said. “We don’t know what the numbers will be. All public schools need more funding including reservation schools.”

Blackwater-Nygren said other legislators treat Native Americans with respect and Navajo rugs are prominently placed when entering the House floor. She said Arizona has a long history of being proud of tribes and showing deep respect for native cultures. However, she said that doesn’t necessarily translate into securing funding for necessary projects.

“But the reverence for tribes is there,” she said. “It makes me feel good that even the most conservative members supported the bill for recognizing the Navajo Code Talkers. I got a standing ovation after speaking about the Code Talkers.”

Blackwater-Nygren said she also appreciates that Speaker of the House Rusty Bowers has visited the Navajo and Hopi reservations.

As a recent law school graduate, Blackwater-Nygren was concerned about voter suppression laws and also wanted to represent Navajo and other tribal interests.

“I was looking for a place where I could thrive and how I could impact tribal communities,” she said.

Raised in Red Mesa, she graduated from Monument Valley High School in Kayenta, Arizona. Regardless of where she goes, Blackwater-Nygren always makes time to come back to her home in Red Mesa.

She graduated from Stanford University in 2017 with a Bachelor of Arts in science and technology with a focus on sustainability and the environment, and a minor in Native American studies.

Every summer, during law school, she served internships including stints with Navajo Nation Legislative Council and Navajo Nation Supreme Court.

Blackwater-Nygren thanked former State Rep. Arlando Teller for giving her support during her first year in the legislature.

“I know the amount of work that he did and it is such an honor to carry on his legacy,” she said. “I am looking forward to representing Legislative District 7.”

Blackwater-Nygren also thanked the Navajo County Board of Supervisors for appointing her and State Sen. Jamesita Peshlakai and State Rep. Myron Tsosie for showing her the ropes.

Blackwater-Nygren supports the movement to address the Murdered and Missing Indigenous Women problem. On May 5, there will be an event to highlight the MMIW at the state capital as the area will be lit in red.

Blackwater-Nygren hopes to serve on the study committee at the state legislature for Murdered and Missing Indigenous Women, but they have not met this year because of the pandemic.