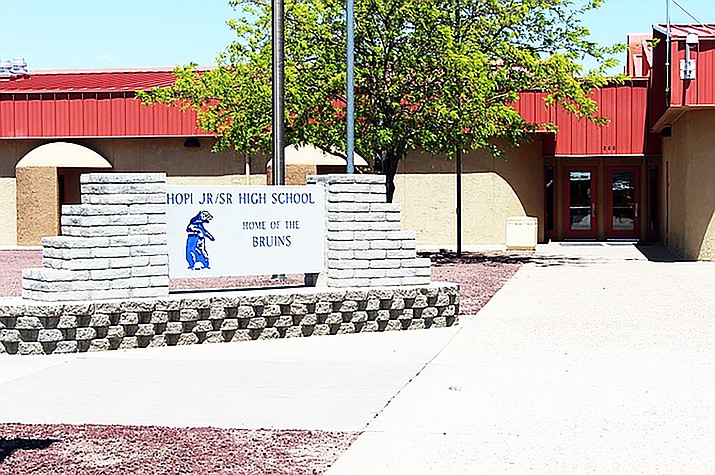 Hopi Jr/Sr High School announced it is canceling its Winter Athletic Season due to the ongoing pandemic. (Photo/NHO)

POLACCA, Ariz. —While much of the state begins to ease restrictions implemented because of the COVID-19 pandemic, Hopi Jr/Sr High School has decided to cancel its spring sports season.

A letter from school administration to parents announced the decision March 23.

“Out of an abundance of caution and based on Hopi Jr./Sr. High School (HJSHS) staying with its distance-learning format for the foreseeable future, the HJSHS Governing Board officially canceled the 2020-2021 spring athletic seasons during the regularly scheduled March board meeting,” the letter states.

“However, the direction became clear based on feedback from stakeholders, staff, tribal leadership, healthcare professionals, along with the lack of other area schools at both the High School and Jr. High levels participating in activities this spring,” the letter continues. “Please know that the safety of our students and community are at the forefront of all decisions made by HJSHS.”

Greer said the decision was disappointing for everybody involved.

He said he had hoped sports and in-school learning could resume at the start of the fourth quarter, which would have been in April.

According to Greer, the Arizona Interscholastic Association (AIA) schools that had returned to playing sports resumed March 12 and will end May 8, making it impossible for Hopi to match up with those dates.

Additionally, executive orders keeping the Hopi Reservation on lock down until the end of March and the Navajo Reservation until mid-March, made it impossible for schools to play each other.

“It was evident most schools could not participate,” he said.

Greer said St. Michaels, Page, Holbrook and Alchesay were the only area schools that were able to play according to the AIA schedule.

“Tuba City will try to get some games in,” he said.

Greer said Hopi Jr/Sr High School coaching staff met before the decision was made and said coaches were supportive.

“They agreed we need to put safety first,” he said. “As much as we would like to be back on the courts and the track, it’s not the right move at this time.”

Greer said the decision was made in conjunction with administrators, school leaders, tribal leaders and health care leaders. He said this group meets every Thursday. They also had stakeholders, take surveys.

He said many students want to return to school and sports, but realized the importance of waiting.

“A lot of families on Hopi have had great loss and they’re taking this seriously,” he said. “There is an interesting mix of responses. A good number of parents would like to get back to normalcy. But the parents feel it’s best to be cautious, put the community first and protect the most vulnerable — the elderly.”

The decision to cancel the season came amid the good news that the pandemic is decreasing on the Hopi Reservation.

“The metrics are looking much better for Hopi. It’s been significantly decreasing,” Greer said.

He attributes the decrease to community members to get vaccinated. He said vaccination numbers are fantastic compared to the rest of the county and the state.

“I tip my hat to Hopi Health Care Center because they have been great getting information out to the community,” he said.

Greer expects some sports to return this summer. He said not a lot will happen in June because high school graduation will take place. However, he said Hopi Jr/Sr High School plans on having in-person summer school.

“We hope to bring in athletes and do workouts to get back in shape. That will be a big thing,” he said. “Some of the student athletes have done a great job of running and staying in shape, but a lot won’t be in game condition. We haven’t had any sports for one year. We will try to setup seven on seven football leagues and basketball leagues with other schools.”

Greer said the great unknown is how far behind Hopi teams will be for next year after having a year off.

“We won’t know until we can evaluate them,” he said. “Our regional schools are in the same boat, but for the state competitions we’ll be behind. It will be interesting. Next year will be a much different year from anything we’ve seen.”

Greer said Hopi Jr/Sr High School is in the beginning stages of planning the ceremonies for graduation and junior high promotion in June.

Hopi Jr/Sr High School planned to have 12-month employees, meaning administrators and office staff would return on March 29, however, no date has been set yet for when teachers return or in school learning will resume for students.

Greer said HJSHS reminds everyone to stay at home, mask up around all individuals that do not reside within their household, practice good hygiene procedures and stay socially distanced.

“It takes all of us following these protocols faithfully to continue the recent reduction in spread within our communities,” he said.