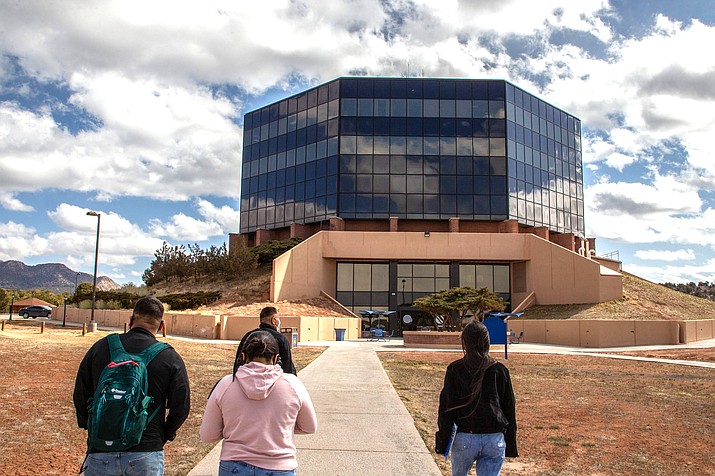 Diné College is choosing to look at the coronavirus pandemic as an opportunity rather than a hurdle, according to President Charles M. Roessel. He said students’ attitudes reflect that as they recognize the importance of learning the Navajo culture, tradition and language. (Jeff Rosenfield/Cronkite News)

Diné College wasn’t Harley Interpreter’s first choice for higher education. During summers in high school, at the urging of her elders, she would travel off the Navajo Nation reservation to see what colleges elsewhere had to offer.

But the convenience of Diné College — the first accredited college to be tribally controlled — and its proximity to Interpreter’s home near Tsaile was too good to pass up.

And the longer she attends, her choice makes more sense. As a young Navajo woman, she found the traditional knowledge and language the college offered was invaluable. She helps care for her grandparents who speak Navajo better than English. Earning her degree from Diné College would also mean a closer relationship with them and an opportunity to keep their wisdom, language and culture alive.

“The way that we were being taught with our Navajo philosophies was where I really began to learn,” Interpreter said.

It also put her on the front lines of her tribe’s battle against COVID-19, which has already claimed more than 1,200 Diné lives.

When Interpreter’s household – herself, her mother and her grandparents – contracted COVID-19 in December, the college senior stopped working and switched to part-time classes to care for her family. Her grandparents, who were on oxygen concentrators at one point to help them breathe, have since recovered.

Interpreter not only is a caretaker for her grandparents, but also for the culture and the language they carry in their minds and hearts.

“When I came here, it was definitely very different from the way I’ve seen a bunch of other colleges do things,” Interpreter said.

She was raised hearing stories of her cultural background, and her grandparents spoke only Navajo, so the subject matter at Diné wasn’t shocking for her, but she was struck by the focus on community and Indigenous philosophies.

“I chose to come to Diné College because it’s closer to home, and I feel like everyone on the reservation is family,” Tohe said. “The traditions we grew up with, we can learn more about (here).”

“I grew up here in Tsaile,” said Nachae Nez, who also attends Diné. “And I thought it was the best place for me to lay the foundation for my future, hence the school’s motto: ‘Where your future begins.’”

Jacy Williams said she learned about some Navajo traditions she had no prior knowledge of.

Interpreter, Nez and Williams all mentioned that Diné College, where enrollment was 1,324 last fall, taught them the invaluable lesson that the school is founded in: Sa’ah Naagháí Bik’eh Hózhóón. These principles signify a holistic approach to life and implement the process of Nitsáhákees (thinking), Nahat’á (planning), Iiná (living) and Sihasin (assuring) when dealing with a situation or obstacle in life.

That focus on community, tradition and lifelong knowledge and wisdom is exactly why Diné College continues to push so hard in the face of COVID-19 to give its students whatever resources they need to continue their education, both in the academic and in the traditional fields, President Charles M. Roessel said.

Students often will take their degree back to their community to build a better future and a better world for themselves and their immediate communities, he said.

“One of the central tenets at the Diné College is the idea of nation-building,” Roessel said. “That is why it’s important” to persevere.

That perseverance was threatened by the pandemic, which hit the reservation disproportionately hard. Longstanding challenges include lack of access to running water, which makes hand-washing difficult, and the multigenerational households that are common on the reservation. Tribal officials mandated strict lockdowns, curfews and social distancing rules, but an outsize number of Navajo elders died. 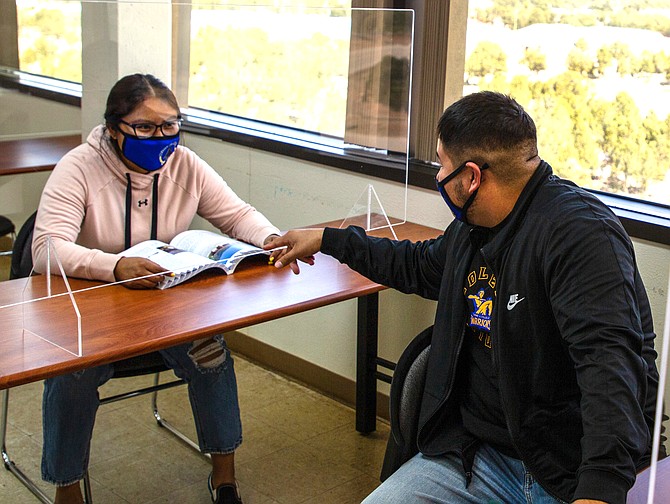 Since the beginning of the outbreak last March, 1,187 Navajo living on the reservation have died, with those older than 50 succumbing at a disproportionately high rate.

The Navajo Nation has reached 29,794 confirmed COVID-19 cases as of this writing. In December, cases reached as many as 400 per day.

Roessel said watching elders die of COVID-19 has not made traditional knowledge any more important, but it has made students, faculty and staff appreciate more deeply the sacred arts of basket weaving, silversmithing and the Navajo language.

Perpetuating the Diné identity and in turn contributing to the nation building are necessities of the Diné College’s mission and purpose in the Navajo community, said Lawrence Isaac Jr., the dean of the School of Diné Studies and Education.

“We have lived with hardship,” he said. “And yet the emphasis has always been to be self-sufficient. So we’re talking about survival. Literally.”

A history of resilience

The resilience of the Navajo people in the face of deadly outbreaks dates back to the 1918 influenza pandemic and beyond, Isaac said. The flu took the lives of 10 to 18 percent of the Navajo population, according to estimates.

COVID-19 is no different.

“All my faculty had to switch to online teaching,” he said. “I think it’s a very good example of reconciling traditional ways in teaching with mainstream techniques.”

Interpreter said traditional instruction of the Navajo language is important to her on much more than just an academic level.

A good chunk of the Navajo language she has learned came from the on-campus job she was forced to leave at the Ned Hatathli Center, a museum of artifacts and tools. The curator she worked with there would walk her through the museum and tell her the Navajo names for everything on display.

“One of the assistants (at the museum) had me help him put the rug weaving loom together,” she said. “And while he was doing that, he was telling me stories of his grandmother, and he was singing and it was all in Navajo.”

Hearing about relatives of any age dying of COVID-19 has created a sense of duty to learn the language more deeply, Interpreter said.

“There’s always been this talk about our elders because they are the knowledge holders,” she said.

Roessel said it’s important to carry on, even when relatives and friends are lost.

The most recent statistic available on speakers of the Navajo language is from the Census Bureau in 2015, and counts just fewer than 170,000 speakers.

But at the same time, Roessel, said the Navajo Nation is one generation away from preserving the Navajo language, learning about the arts, the crafts and the skills.

Roessel said Diné College is choosing to look at the pandemic as an opportunity rather than a hurdle, and students’ attitudes reflect that.

“We have students driving 30 miles to go to a class and then they drive 40 miles to work a shift in a convenience store,” he said. “And some students are driving 50 miles to get on a mesa and then climbing another hill to get (internet connection).”

Students don’t want to put their futures on hold, he said, and Diné College has no plans of letting that happen either.

“If they can do that and make that determination, Diné College sure as hell better be there. Because we have to meet at that intersection of the future with those students to try to achieve that for both of us, building a nation and building a future,” Roessel said.