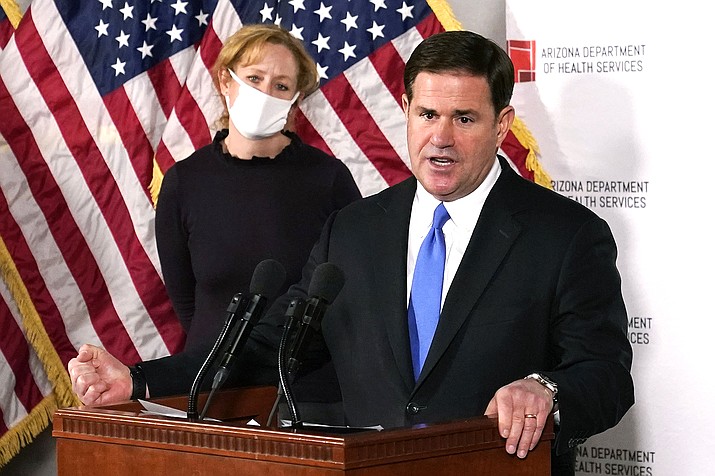 The Republican governor cited rising vaccination rates and the opening of vaccine appointments to all adults, as well as a declining number of COVID-19 infections and hospitalizations.

Ducey encouraged the continued use of masks, particularly among groups of unvaccinated people. His latest executive order allows businesses to enforce mask mandates and distancing requirements if they want, but cities, towns and counties must lift theirs.

Restrictions on gatherings of 50 or more people also were lifted, but organizers are required to "encourage" safety precautions like social distancing.

"I'm confident Arizona's businesses and citizens will continue to practice the fundamentals and act responsibly as we gradually get back to normal," Ducey said in a statement.

House Speaker Rusty Bowers, a Republican from Mesa, called it "the right and responsible decision" in a statement released by Ducey's office.

"To abandon precautions now is like spiking the ball on the 5-yard line," Gallego wrote on Twitter. "We know new variants are circulating. The risk of another surge is real. The governor clearly cares a lot less about the people of Arizona than his political future."

Ducey resisted pressure to implement a statewide mask mandate last year even as the virus spread rapidly and hospitals became overcrowded. He eventually allowed local governments require face coverings, and most did.

Ducey says local mask mandates were rarely enforced; mayors say they were instrumental in getting people to comply with the recommendations of public health experts who said masks are instrumental in limiting the spread of the virus.

Arizona has twice experienced outbreaks that were among the worst in the world at the time but has more recently seen significant improvement in virus metrics.

The state on Thursday reported 138 additional confirmed COVID-19 cases, the smallest daily increase reported in more than six months. The state reported 81 additional cases on Sept. 8 in the trough between last summer's surge and the worst one over the fall and winter when daily case reports reached as high as 17,000.

Another 32 deaths were reported Thursday, increasing the state's pandemic total to 16,874.

The rolling average of daily new cases and dropped by more than half over the past two weeks to just over 500 on Tuesday, while deaths fell by nearly a third to 36.6, according to Johns Hopkins University data.