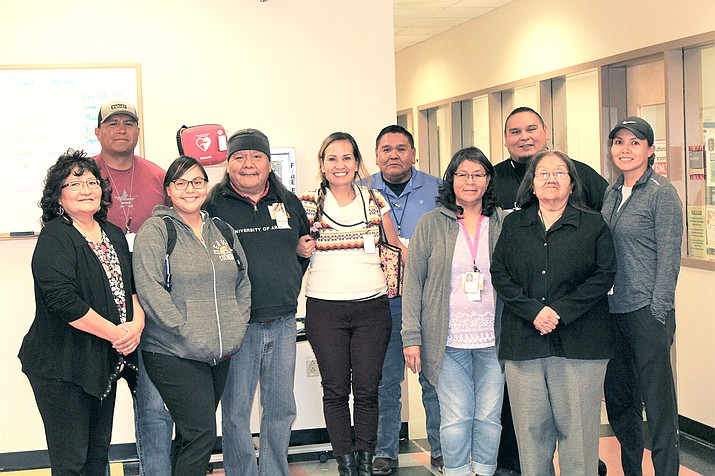 The Navajo Special Diabetes program had more than $7.1 million in grants during the past year to operate the program. The grants, mostly from the federal government, are based on population with funding going to the five service units on the Navajo Nation. This funding has been ongoing since 1997.

Damon said there is a high incidence of diabetes on Navajo Nation with 100.2 people per 100,000 or almost 10% of the population has diabetes.

“We implemented these programs to help the incidents go down,” she said. “We implemented both preventive and educational activities to be able to monitor and treat diabetes.”

Damon said diabetes can be managed with health and exercise. She added that mental health is also an important part of the diabetes management program as well as self-awareness and self-care. Sticking with traditions, Damon said, also helps deal with diabetes — patients get up with the sun and run to the east to get their blessing. Family is also an important part of Navajo life, family members help each other with health issues.

“We overcame and prevented diseases before medicine was established,” Damon said. “We use Navajo and English (languages) to teach traditions”

The Navajo Diabetes program also works with two schools to educate students about diabetes. Rocky Ridge Boarding School, which is in a remote area, has vegetable gardens at the school and at students’ homes to help families eat healthier diets. Hopi gardeners, known as experts, come to the school to teach the students how to use the land.

The Star School, located just north of Flagstaff, has a large population of Native American students. They have physical activity in their curriculum and they harvest their own food for lunch.

The special diabetes program also works with reducing tobacco and emphasizing Native tobacco over commercial tobacco because it does not have nicotine.

Damon said Native Americans have a high incidence of smoking and they have not had much success trying to curb it. She said no smoking programs have worked on reservations.

“So we talk about sacred tobacco — not smoking for recreation or to release stress, but for blessings and prayers,” she said. “We can distinguish the type of tobacco.”

Another program they have for diabetes is acupuncture of the ear. Damon said this decreases blood sugar level and releases stress. But they can use beads instead of needles. This is also used to help those with PTSD.

“This is a nonverbal way of treating trauma,” she said.

“We have had to come up with creative ways to track it. Some phones track it,” she said.

Damon said prior to Covid-19, these running and walking events would bring in about 300 people, but now people run alone or in small groups.

“These events brought the community together,” she said.

“Each came up with their own program. This is what works for Navajo,” she said. “We work with other tribes on sharing best practices, but each tribe is different.”

Genevieve Notah, public affairs liaison at Navajo IHS in Window Rock, said during the past three years the numbers of diabetes patients has decreased with help from their program.

Notah said Indians have family histories of diabetes and they need to monitor their blood sugar and fight it in any way they can.

“But we’re not going to get it just because our relatives had it,” she said.

Notah said regular check ups is important and some signs of diabietes are an increase in weight or mood, but she added that not everyone has the luxury of getting to the doctor as many on Navajo lack transportation.

“Depending on where they live, it may be hard and it’s been harder due to COVID,” she said.

Notah said wellness depends on keeping the routines of mind and body solid meaning that the individual balances their time with family. She said people should keep their arms and legs moving while they are watching what they are eating and eating the best food possible.

Damon emphasized the program does not discriminate against anyone who wants to use the program.

More information is available by contacting the Navajo area office at 928-871-1338 or emailing shawnell.damon@ihs.gov.