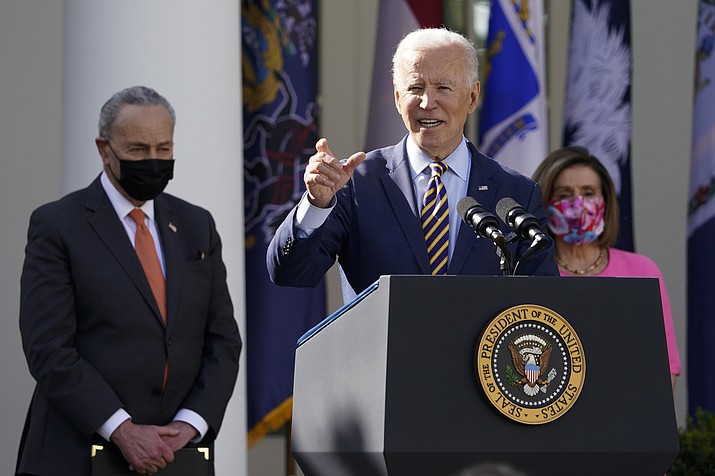 WASHINGTON — The American Rescue Plan was enacted by Congress March 10 and President Joe Biden signed the bill into law March 12.

The 628-page coronavirus relief legislation includes $1,400 in direct payments to individuals making up to $75,000 annually, gives $350 billion in aid to state and local governments, $20 billion to tribal nations, and budgets $14 billion for vaccine distribution. The law will extend jobless benefits through September.

This bill, Biden’s first legislative victory, is a significant contrast to the Republican approach to governing. Former President Donald Trump’s first initiative was a $1.9 trillion tax relief measure that primarily benefited the wealthy.

Rep. Deb Haaland, D-New Mexico, voted for the measure in order to get urgent relief to families in New Mexico and across the country. This may end up being Haaland’s last vote as a member of Congress if she is confirmed as Secretary of the Interior.

The independent Tax Policy Center said the relief bill would give almost 70 percent of this year’s tax breaks to households earning $91,000 or less. In contrast, the Trump-era GOP tax bill gave nearly half its 2018 reductions to the top 5 percent of households earning around $308,000, said a research center, run by the liberal-leaning Urban Institute and Brookings Institution.

The plan is designed to pump money directly into the economy including $20 billion that will go directly to tribal nations and another $6 billion for Indian health programs.

Additionally, the plan has funds to ramp up vaccine distribution, expanded unemployment insurance, support for ailing businesses, funding for schools and will give checks of $1,400 to most Americans.

This legislation is said to do more to address poverty, especially child poverty, than any law since the 1930s and the New Deal.

When Former President Franklin D. Roosevelt came into office in the 1930s spending directed at American Indians and Alaska Natives was $20.5 million. A year later that jumped to $28.3 million, an increase of more than 38 percent.

Last year’s CARES Act contained $2 billion for tribal governments — the starting increase in this plan is a 900 percent increase and does not include the money for Indian health programs, roughly a doubling of $6 billion. And even that amount is less than what will be spent because the new law also increases funding for the Affordable Care Act which in turn will boost the Indian health system, especially those facilities operated by tribes and nonprofits.

According to a recent report by the Center for Budget and Policy Priorities, the pandemic has stretched tribal nations’ finances and health systems to the breaking point.

The National Congress of American Indians President Fawn Sharp said that “direct relief and other aid which is critical to the health, safety and well-being of our communities and necessary to build back our distressed governments and economies.”

There is a lot to be learned from how tribes managed the $2 billion from last year’s CARES Act.

The law originally required all of the money to be spent before Dec. 31.

“One big issue with this $20 billion is, you know, how can tribes pick up where they left off and how can they use it in a strategic way, moving forward to amplify the work that they’re already doing,” said Wayne Ducheneaux, executive director of the Native Governance Center. “It’s going to be a struggle … but with proper technical assistance and support, they can really make a pretty big bang for this amount of buck.”

A plan for the Navajo Nation

“We realize that there are great needs in our communities, immediate and long-term. With the CARES Act, we had a very short timeframe to expend the funds due to the original deadline that was included in the bill enacted by Congress, but we did our best to connect homes to electricity, provide water to homes, strengthen broadband, and provide direct financial assistance to our Navajo people,” said Navajo Nation Vice President Myron Lizer.

According to Lizer, the current bill being considered would provide a greater timeframe to use the funds, which will allow the Nation to plan more efficiently and complete more projects and provide more long-term assistance. We appreciate all of the support and collaboration of our Congressional members and federal partners throughout this process.

The Navajo Nation’s Controller Pearline Kirk said the complexity of managing federal funds has complicated the running of tribal governments. She said under the CARES Act the nation had to manage $714 million in spending.

“This is a nearly 225 percent increase over what the Navajo Nation normally manages in federal funds over a normal 12-month period,” she said.

According to Kirk, the regular duties of the Controller’s Office did not miss a beat throughout the dangers and risks of the COVID-19 pandemic.

Additionly, the office has completed work on the Navajo Nation Financial and Single Audit for FY 2019 and is currently performing work on the FY 2020 audit.

In addition to the funding for tribal governments, there are significant resources directed at families, including Native American families.

One of the odd things that has happened to our tax code over the past decade is that most people play more in payroll taxes than income taxes. Income tax is supposed to be progressive, make more, pay more. But it has not worked like that. The most famous example is Warren Buffett revealing that his tax rate was lower than his secretary’s rate. The Democrats’ plan addresses this inequity by making the Earned Income Tax Credit fully refundable. That’s money back in working families’ pockets.

“When you infuse an economy with this extra amount of resources, it’s going to help have an amplifying effect that can really help move,” generating a maximum impact on tribal economies, Ducheneaux said.

The Native Governance team recently interviewed tribal leaders and had some 19 conversations with 23 tribes in Minnesota and Dakotas. One of the questions: “What’s going great with your tribal nation?” Ducheneaux said “the amount of good we learned that’s going on is pretty cool.” Expect more of that.

Senate Indian Affairs Chairman said the total was more than $31.2 billion in dedicated funding for tribal governments and native communities, comprising the largest investment in history for Native programs.