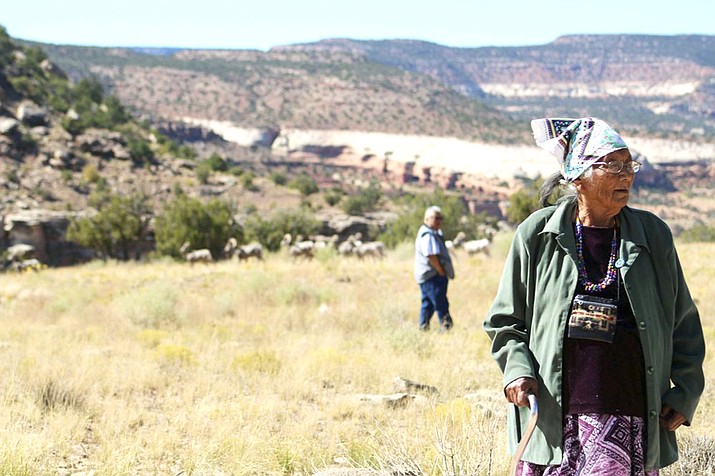 In 2019, Annie Henry and Gilbert Badoni revisit the area where they used to live at a uranium mining camp in Slick Rock, Colorado, and found remnants of their former homes. On Feb. 11, the U.S. Environmental Protection Agency (EPA) announced three contract awards for cleanup efforts at more than 50 abandoned uranium mine sites in and around the Navajo Nation. (Kathy Helms/Gallup Independent via AP)

Yazzie shares that it has impacted his health and many of his family members’ health.

Yazzie grew up in Cane Valley, southeast of Monument Valley, and said his maternal grandfather Luke Yazzie Sr. found uranium mill tailings less than a mile from their homestead. Their home was demolished in 2009 because of the contamination.

In the 1990s, Yazzie survived a diagnosis of cancer and continues to live a fearful life because he doesn’t know if it will come back. His father has heart and lung issues from working as a miner and truck driver on the uranium operations. His father’s health conditions mean he has to live with Yazzie to be closer to a hospital. His father wants to go home to Cane Valley, but that area is still being cleaned up.

His grandfather and his grandmother died from cancer in the 1990s.

Yazzie said there have been uranium cleanup efforts for 30 years, but they have all been piecemeal leaving the work unfinished.

“It has not been comprehensive so after almost 80 years we ask, ‘why, why, why, does it sit so long?’” he asked. “Why does the government not hear us?”

He jokes that it is because the govern-ment does not understand his accent.

According to Yazzie, the $220 million released by the federal government Feb. 11 for cleanup of uranium mines on the Navajo Nation is a good step, but emphasized that a U.S. EPA news release is not accurate. He said the news release makes it appear that the U.S. EPA is working closely with the Navajo EPA, but he said this is not the case.

Navajo EPA needs to be more involved than the U.S. EPA is so far allowing, said Yazzie, who has been working on the uranium mining issues on Navajo since the 1990s.

“The request is to tie into Navajo participation,” he said. “The press release shared from the U.S. EPA was a little misleading with what they share because it says they work closely with the Navajo EPA.”

While the U.S. EPA has made some efforts to work with the Navajo EPA, Yazzie said they are not coordinating with Navajo EPA to the level desired.

He said the $220 million came from a settlement that was meant for the Navajo, but instead it is going through the federal EPA to contractors.

“We have the U.S. EPA dictating to Navajo the methodology that is used and there is a lot that is not elaborated on,” he said. “We don’t have input.”

“EPA continues to work with the Navajo Nation EPA and local communities to address the legacy of abandoned uranium mines,” said Deborah Jordan, Acting Regional Administrator for the EPA’s Pacific Southwest office. “These contract awards mark a significant step in this ongoing work.”

Most of the funding for the contracts comes from the nearly $1 billion settlement reached in 2015 for the cleanup of more than 50 abandoned uranium mine sites for which Kerr McGee Corporation and its successor, Tronox, have responsibility. In addition to the funds from the Tronox settlement, the EPA and Navajo Nation have secured funding agreements, through enforcement agreements and other legal settlements, for the assessment and cleanup of approximately 200 abandoned uranium mine sites on the Navajo Nation, according to the U.S. EPA.

Yazzie said he is also concerned about who the EPA selects as future contractors.

“We don’t know enough about the companies chosen this time,” he said. “My research so far shows they are qualified with no standing actions against them.”

He said the Navajo EPA did not have participation in selecting these companies and that the Navajo EPA’s role in the pending cleanup is as a support agency for US EPA.

“We get to review all documents. We can bring problems to their attention, but according to U.S. EPA Region 9, they are the final decision makers,” he said.

Yazzie said one of the intents to clean up the uranium is to bring as much employment to the Navajo Nation as possible, but he feels the Navajo EPA is being delegated by the U.S. EPA to hire the workers.

“We have been voicing this for a number of years,” he said. “We were told we couldn’t do that.”

The Navajo EPA has been able to do this on other projects such as cleaning up water or air, but the U.S. EPA told them they could not do that legally on the uranium cleanup, Yazzie said. He questions whether this is true.

“I have a fully functioning group that has a superior amount of expertise,” Yazzie said.

The project would call for everything from laborers to equipment operators to higher paying technical jobs. Engineers and other specialized workers would need to be brought in.

Workforce training that could be offered by the contractors may cover radiological contamination, health and safety, construction and road building. In addition, the contracts require the selectees to provide quarterly reports to the EPA, Navajo Nation, and the public on cleanup progress, training and Navajo job and business opportunities, according to the U.S. EPA.

“We would prefer that they would come from Navajo, but we have no say on how the contracts work,” Yazzie said.

At this point, he does not know how much the jobs will pay.

Activists say limited environmental regulation occurred prior to the founding of the Environmental Protection Agency in 1970 and the mining has endangered thousands of Navajo workers, as well as contaminating air and water on Navajo lands for nearly 80 years.

“That’s too long. Anywhere else in the nation where white Americans live this doesn’t exist,” he said.

During the Cold War, 30 million tons of uranium ore were mined on or adjacent to the Navajo Nation, leaving more than 500 abandoned mines, according to the U.S. EPA.

Since 2008, the EPA has conducted preliminary investigations at all of the mines, completed 113 detailed assessments, cleaned up over 50 contaminated structures, provided safe drinking water to over 3,000 families in partnership with the Indian Health Service, and completed cleanup, stabilization or fencing at 29 mines, they said.

Preliminary work, including initial process assessment and removal site evaluations, means the cleanup would not begin until 2023.

Yazzie said it also needs to be recognized that as indigenous people, they have a distinct connection to the environment.

“We call her our mother,” he said.

Yazzie said that means the environment’s health goes to the very nature of their own health and vice versa.

“We have practices and protocols on how we address Mother Earth,” he said. “We would like to have that included in our efforts.”

Yazzie recognizes that this is a foreign idea to some people, but to Indigenous people the environment involves their history and their guidance to life.

“We don’t ask them to understand it, but we ask them to respect it,” he said. “If we had true engagement, we would not be where we are today. The U.S. EPA is not working with us in the manner used in the press release. If nobody knows about this we will continue with the same rhetoric that has been going back years.”