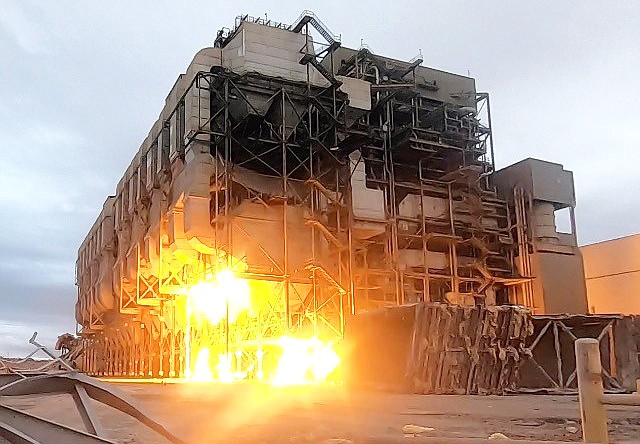 PAGE, Ariz. – Under a dark, wintry dawn sky, the massive NGS Units 1 and 2 electrostatic precipitators rolled to the ground in another flawless blast Jan. 19.

In just two seconds, steel beams supporting the precips were sliced through like a laser by 110 brilliant, sequential dynamite detonations. Five seconds later, the fly ash collectors were laying on the ground in mountains of twisted metal.

“When we drove up here, Gary said, ‘Oh, by the way, Julie, you’ve got to get dressed because you’re going to come do this,” Elliott said.

Dynamite blasts drop NGS Units 1 & 2 precips in 7 seconds. This video can be viewed on Salt River Project's website, along with other videos, articles and information regarding the Navajo Generating Station. https://media.srpnet.com/ngs-precipit...​

“Your go-code will be, ‘Light it up, ladies,” Ron Gilbert, Dykon’s Vice President of Operations, told the women.

After the one-minute warning came the countdown and call from Gilbert — “Fire in the hole!” — followed by the go-code to blast away.

“It was awesome,” Navarro said. “I didn’t think we’d have that opportunity.”

It was over within seconds except for the cleanup that will take a week or two. The Unit 3 precip was demolished a month ago when the three 775-foot stacks were felled like trees.

To prepare for the Jan. 19 blast, hundreds of V-shaped torch cuts had to be made at the base of the steel support beams, or “stumps,” and high up to separate the 203-foot-tall precipitator infrastructure at all points it connected to the adjoining 21-story boiler infrastructure.

There could be no place where the falling precipitators might have a “sticker” — something as small as a bolt head — that could catch and pull the boilers down with the precips or cause the precips to not fall as they were supposed to. Instead, the separation was perfect, allowing the huge structure to rotate, collapse and fall into the area where the three huge stacks once stood.

These hot-side electrostatic precipitators were original to NGS. For 45 years, they removed 99.5 percent of fine fly ash from the flue gas before it could be discharged from the stacks.

Next on the schedule is demolition of the similarly huge boilers that created the steam to turn the NGS turbines.

“The really exciting part of all this is restoring the land and returning it after 50 years of all this effort and all this industrial use,” Elliott said. “To restore it to nature, that’s the best part.”

Working with SRP, a number of U.S.-based contractors will continue demolition and reclamation responsibilities at the plant site including disassembling the power block and addressing cleanup and restoration. SRP anticipates that decommissioning will take approximately three years to complete at a cost to the NGS owners of around $150 million. Based on initial study, SRP estimates that more than 90 percent of the decommissioned plant will be salvageable.

The Navajo Nation has elected to retain a number of facilities at the plant including the warehouse and maintenance buildings, lake pump system and railroad that are valued at around $175 million. The owners also paid nearly $19 million to the Nation for cost savings associated from not decommissioning those facilities and paid $3.6 million to fund a solid waste disposal program for the Nation.

In addition to extending operations at NGS for nearly three years to ensure a transition period for the Nation and plant employees, the NGS owners agreed to a 35-year extension lease that will provide lease payments totaling about $110 million to the Navajo Nation and will allow continued access to the site for decommissioning, long-term monitoring and ongoing operation of the transmission system. The federal government has also pledged to provide 500 megawatts of transmission capacity from the NGS transmission station that is valued at more than $80 million. The NGS owners will pay the Nation’s share of operations and maintenance costs at the station for 10 years, at a project value of $5 million.

Prior to closure, SRP offered new positions within the company to all 433 regular NGS employees. With operations concluded at the plant, nearly 300 accepted offers for redeployment to other SRP positions. SRP has also instructed contractors conducting decommissioning operations to extend hiring preference for contract work to qualified members of the Navajo Nation.