Sitting on the roof at night for internet: Pandemic learning in the Navajo Nation
A teacher shares the struggles of reaching students learning at home during the coronavirus pandemic 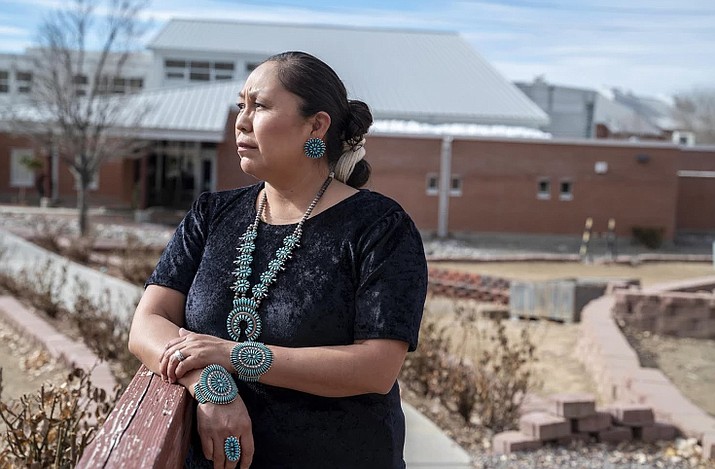 Denise Jensen is a teacher at New Mexico’s Navajo Preparatory School, a boarding school for Native American students that has been closed for almost a year because of COVID-19. Jensen has been teaching students remotely since March 2020. (Photo/Steven St. John, Education Week)

Editor’s note: This article is reprinted with permission from Education Week. It highlights the unique challenges of remote learning and life on the Navajo reservation during the coronavirus pandemic. Denise Jensen teaches New Mexico History and Navajo Culture at Navajo Preparatory School, in the northwest corner of New Mexico. The private, International Baccalaureate college-prep school established for Native American students serves about 265 teenagers from the Navajo Nation and other tribal nations. Most live at the school when it’s in session. When Navajo Prep went all-remote last March, Jensen saw the struggles her students faced to do their schoolwork from home.

This article is written in first person and shared as it was told to Catherine Gewertz, senior contributing writer at Education Week.

I had a student who was a senior last year. When it got to a point where I was not receiving work from [him], I began to reach out to him.

I was first trying to reach out to him through emails, and he seemed to be able to get the emails OK. But he then said it’s better if we can try to communicate through phone, I have a better phone signal than I do internet signal. He was having just such a hard time—not even just accessing his work through email but also just getting onto his Wi-Fi at home.

There are like 10 family members who live in the household. And imagine the school-aged children and the adults in that family who are having to use the Wi-Fi for their own purposes. He explained to me that because he was home, a lot of the responsibility fell onto him to feed the cattle, the horses, to take care of them.

So a lot of times, because he was having to fight over the use of the Wi-Fi with everyone else in the household, it just was easier for him to go and do his ranch chores, and to take care of the animals during the day while the others use the Wi-Fi. Then he would come back in in the evening and try to use the Wi-Fi in hopes that he would have stronger signals.

He really struggled with uploading assignments and emailing them to me. So when we talked on the phone, he really surprised me the first time.

He said, can I call you back? I need to get to a place where I have a stronger signal. He called me. And then I, you know, immediately I could hear that wind, it was kind of breezy, and you could hear the wind blowing. And I said, are you outside? He goes, yeah, I had to crawl to the top of my roof, because this is where I can get a better phone signal.

He was frustrated. He’s a good student. He’s used to performing above expectations. And with these challenges that he had, it was frustrating, because it was limiting him. He was trying, and he was doing everything he could, to get things submitted, to show us as his teachers that he wasn’t just using excuses, that he was going above and beyond to do his part to make sure he was getting things turned in.

No gas for the generator

[I had another student who] was a junior.

She lived smack dab in the middle of the reservation along Lukachukai Mountain. And her family, they still live in a traditional Hogan. They don’t have electricity.

There was an assignment that was due on a Monday and it required her to do some writing over the weekend. She got an email through to me, I believe it was that Monday, and explained her situation. She worked on it for as long as she could.

By that time, Navajo Nation issued stay-at-home orders and they had weekend lockdowns. They also instituted a $1,000 fine for anyone who was out when they weren’t supposed to be out. So you could get ticketed for driving somewhere. In this particular situation, this young lady, whose family home relies on a generator, they ran out of gas. Her laptop died and she couldn’t do any more work. Whatever they had left in their generator had to sustain their household until they could get gas again.

Learning to adapt: Lessons in humility

This has really humbled me in a lot of ways as a teacher, because more than ever, the home and the reality of the situations that our students are in right now are just requiring that. The compassion, being understanding and just being willing to—it’s been difficult. 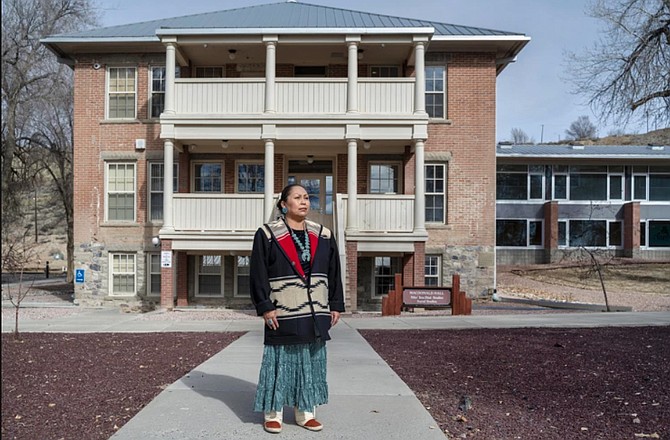 Jensen has seen many students struggle to complete and turn in assignments because their home Wi-Fi and phone signals are too weak or nonexistent. The school's IT department has provided hot spots and even installed antennas on some students' roofs to help with connectivity. (Photo/Steven St. John for Education Week)

I’ve always had high expectations of my students. But I’ve had to take that step back and I’ve had to look at each individual situation for what it was and acknowledge that that student is in a situation where, number one, it’s not in their control. Number two, they’re doing their best, and they’re just reacting to what’s happening around them.

Students are also dealing with a lot more family challenges, like living in a single-parent household where they have to take on more responsibility caring for others. It makes it more challenging for them to stay focused on their schoolwork. And there are domestic-violence situations.

It’s frustrating, and it’s heartbreaking, because I can’t help them fix what is really the challenge for them, and what is really affecting them, I can’t fix that.

I record my class sessions so at any time, should a student have to miss [class] for whatever reason, they always have access to those class recordings. They can always go back and watch. And I’ll communicate with them and say, do you have any questions? What do you need help with? And then try to take them from there and keep moving them forward.

As we start spring semester, I find that I have higher attendance rate than I did in the fall. I attribute that to the work of our IT department. They have gone above and beyond.

Starting the year, every student got a new Macbook Air and a hotspot. Our school took the time to find out what service worked best in their home area and tried to match the hotspot with that. There were still challenges, because we have some students who live in areas that had absolutely no signal at all, no connection at all. In some of those instances, our IT team went out and actually installed routers. They installed antennas on top of their roofs.

I meet [students] through Zoom. We are limited though, on the amount of time that we can be in Zoom. The first two weeks of this fall semester, we went on, we were excited, we’re gonna see our kids through Zoom.

By the end of the second week, we saw students dropping out. Students weren’t showing up. And what happened to them? Well, [we] found that their data plan was running out. We had to scale back on our live Zoom sessions. We were limited to 30 minutes [a class] for the first half of the fall semester. By the end of the semester, we increased it to 45 minutes. [The IT team was] able to increase some of the data on the hotspots. So that helped a lot.

In November, my son, my only child, who goes to Fort Lewis College, tested positive. He has an apartment on campus, about an hour’s drive away. He stayed put. We drove up there, left things outside his door. We couldn’t have contact with him. It was so hard. My son was battling COVID and I couldn’t do anything to help him. Fortunately he had mild symptoms.

My husband works for Navajo Nation Gaming Enterprises, and hasn’t been to work since last March because they shut down all the casinos. They had enough to pay the workers [for a while]. But he got laid off the beginning of January and is now on unemployment. The gaming executives say that if the casinos can’t open by March, they might have to shut them down permanently. We don’t know what the outcome will be.

My grandfather died recently. We just found out my mom is sick with COVID. So the reality of [my students’] situations living on the reservation, now I’m experiencing it personally with my mom and my family. My grandfather’s services are tomorrow, and we can’t even all be there. That’s the reality of what a lot of our kids are going through. Even teachers. We’ve had several staff members who have lost family members.

My mom is 65. She lives in a trailer on the north rim of Canyon de Chelly. She got electricity a year and a half ago, but she still doesn’t have running water. So we’re going to take our RV to her, so at least she can take a hot shower, [to] give her some comfort, and hopefully she’ll be able to fight this. You know, her walking out to the outhouse in the cold and having to deal with a wood burning stove, it’s just not good for her right now.

We talk about the cluster outbreaks [here] and how dangerous those are, because we do have so many family members living not just within one home, but in close proximity to one another, that it’s hard to maintain that distance, without thinking about it being a reality, or it being something that can actually happen to you. Until it does.

The Navajo Nation continues to work through remote learning models on the reservation.

Navajo Nation President Jonathan Nez has expressed frustration with the lack of broadband access to those living on the Navajo Nation. During a recent testimony at the U.S. House of Representatives, Nez said 60 percent of Navajo Nation residents lack fixed internet access.

“This digital divide deepens institutional inequities in many crucial areas across the Navajo Nation By putting disadvantaged children further behind in their education; hindering an efficient and decisive government; preventing the provision of critical public health announcements; and limiting the Navajo Nation’s emergency health care, law enforcement and emergency command operation responses,” he said.

COVID-19 has highlighted the importance of access to high-speed fiber-based telecommunications services for every resident of the Navajo Nation, he said.

The Navajo Nation has begun tackling some of the telecommunication problems with funding from the $32 million CARES Act allocation, however, federal restrictions have slowed much of the progress.

"We wanted to do more projects, we wanted to bring more water, more broadband, but we were limited," said Navajo Nation Council Delegate Amber Crotty.