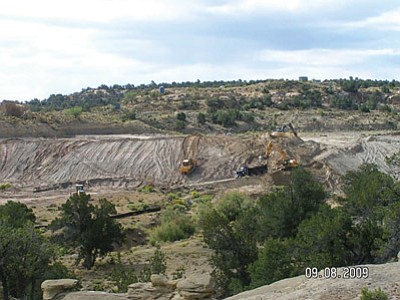 Crews clean the contaminated North East Church Rock mine on the Navajo Nation in 2009. The cleanup was part of the EPA’s five-year plan meant to address the most significant issues surrounding abandoned uranium mines on Navajo lands. Photo/Environmental Protection Agency

FLAGSTAFF, Ariz. — The U.S. Environmental Protection Agency (EPA) announced Feb. 11 three contract awards for cleanup efforts at more than 50 abandoned uranium mine sites on and around the Navajo Nation, including at least 10 sites in Arizona and others in New Mexico.

The Navajo Area Abandoned Mine Remedial Construction and Services Contracts (AMRCS), worth up to $220 million over the next five years, were awarded to Red Rock Remediation Joint Venture, Environmental Quality Management Inc. and Arrowhead Contracting Inc.

U.S. Rep. Tom O’Halleran (D-AZ), said the money could clean up as many as 200 of the 500 uranium mines on the Navajo reservation that need remediation. However, O’Halleran said, with inflation, the funds may not be quite enough to remediate as many as the hoped for 200 uranium mines.

O’Halleran said there is a tremendous amount of work to do on the 500 uranium mines that are considered unsafe.

“I’ve seen some of those mines myself that are in terrible condition,” he said.

O’Halleran said the clay surrounding the mines often crack in the sun allowing contamination to run down into washes or streams.

“The Navajo Nation is full of stories about families decimated by cancer,” he said.

O’Halleran said some jobs from this project will go to tribal members.

“We worked hard to get this accomplished over time. We will make sure to get more funding,” he said. “The EPA will be more active in protecting Navajo people and the Grand Canyon.”

O’Halleran said it is important that the EPA respect tribal sovereignty.

“It’s a plus because we want to make sure that we have the necessary money and have tribal input,” he said. “We don’t want the feds coming in and saying: ‘We’re going to do this’ like they have in the past.”

O’Halleran said he is concerned about the ongoing contamination of rivers and streams by uranium mines.

“We’ve talked about this until we’re blue in the face. When we first came to Congress, nobody understood this and now they do. They know that this is life threatening. We know that children are playing in them because not all of these areas are fenced,” O’Halleran said.

While he doesn’t know anyone in Congress who opposes the remediation of the uranium mines, O’Halleran said it is always a question of where the funding is placed on the priority scale.

“If this was across from the (U.S.) Capitol, we wouldn’t have waited 80 years for the cleanup,” he said.

Deborah Jordan, acting regional administrator for the EPA’s Pacific Southwest office, said in a news release that the EPA continues to work with the Navajo Nation EPA and local communities to address the legacy of abandoned uranium mines.

“These contract awards mark a significant step in this ongoing work,” she said.

Most of the funding for the contracts comes from the nearly $1 billion settlement reached in 2015 for the cleanup of more than 50 abandoned uranium mine sites for which Kerr McGee Corporation and its successor, Tronox, have responsibility.

In addition to the funds from that Tronox settlement, EPA and the Navajo Nation have secured funding agreements, through enforcement agreements and other legal settlements, for the assessment and cleanup of approximately 200 abandoned uranium mine sites on the Navajo Nation.

Work is slated to begin later this year following the completion of assessments in coordination with Navajo Nation’s environmental agency, the Navajo Nation EPA.

The Navajo Nation EPA has not returned calls seeking comment.