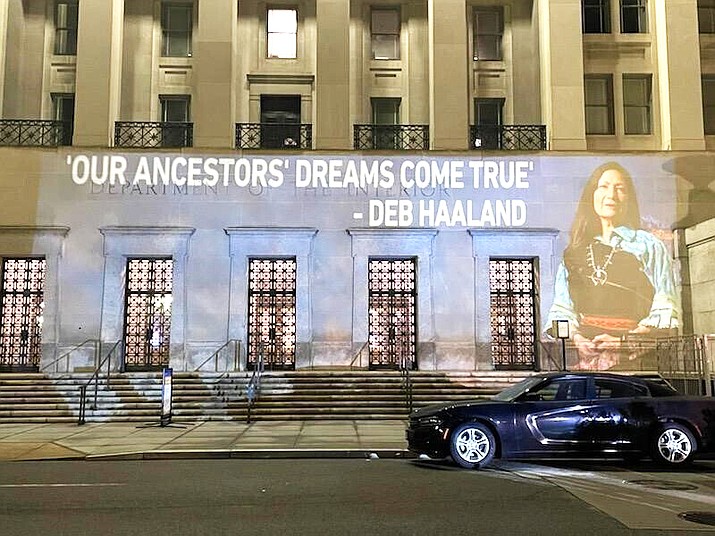 New Mexico U.S. Rep. Deb Haaland’s image is projected on the side of the U.S. Department of the Interior building in Washington, D.C. Feb. 22, prior to her confirmation hearing Feb. 23. (Leah Salgado via AP)

FLAGSTAFF, Ariz. (AP) — When Wyoming U.S. Sen. John Barrasso snapped at Deb Haaland, during her confirmation hearing, many in Indian Country were incensed.

“If it was any other person, they would not be subjected to being held accountable for their ethnicity,” said Cheryl Andrews-Maltais, chairwoman of the Wampanoag Tribe of Gay Head Aquinnah in Massachusetts.

At the Feb. 23 hearing, Barrasso wanted assurance that Haaland would follow the law when it comes to imperiled species. Before the congresswoman finished her response, Barrasso shouted, “I’m talking about the law!”

Barrasso, former chairman of Senate Indian Affairs Committee, said his uncharacteristic reaction was a sign of frustration over Haaland dodging questions. Among Haaland supporters across the nation who tuned in virtually, it was infuriating.

“It was horrible. It was disrespectful,” said Rebecca Ortega of Santa Clara Pueblo in Haaland’s home state of New Mexico. “I just feel like if it would have been a white man or a white woman, he would never have yelled like that.”

The Interior Department has broad oversight of energy development, along with tribal affairs, and some Republican senators have labeled Haaland “radical” over her calls to reduce dependence on fossil fuels and address climate change. They said that could hurt rural America and major oil and gas-producing states. Louisiana Sen. John Kennedy after two days of hearings called Haaland a “neo-socialist, left-of-Lenin whack job.”

Andrews-Maltais saw “radical” as a code for “you’re an Indian.”

But Republican Sen. Steve Daines of Montana said it’s not about race. Daines frequently uses the term to describe Democrats and their policies, including President Joe Biden and Montana Gov. Steve Bullock, whom Daines defeated in November.

“As much as I would love to see a Native American be on the president’s Cabinet, I have concerns about her record. ... To say otherwise is outrageous and offensive,” he told The Associated Press.

Democrats pushed back against Haaland’s treatment and questioned if attempts to block her nomination are motivated by something other than her record. Former U.S. Sens. and cousins Tom Udall of New Mexico and Mark Udall of Colorado said Haaland “should be afforded the same respect and deference” as other nominees.

The hearing itself, in which Haaland was grilled on oil and gas development, national parks and tribes, represented a cultural clash in how the Democrat and many Indigenous people view the world — everything is intertwined and must exist in balance, preserving the environment for generations to come.

That was seen in Haaland’s response when asked about her motivation to be Interior secretary. She recalled a story about Navajo Code Talkers in World War II who prioritized coming up with a word in their native language for “Mother Earth.”

“It’s difficult to not feel obligated to protect this land, and I feel that every Indigenous person in this country understands that,” she said.

That broader historical context is missing from Republican talking points against Haaland that instead simplify the debate to a battle between industry and environmentalists, said Dina Gilio-Whitaker, a lecturer in American Indian studies at California State University, San Marcos.

“There’s obviously a really huge conversation about how the land came to be the United States to begin with,” she said. “That’s the elephant in the living room nobody wants to talk about.”

Andrew Werk Jr., president of the Assiniboine and Gros Ventre Tribes on Montana’s Fort Belknap Reservation, said Republicans’ brusque treatment of Haaland was unfair to her and to Americans.

But he doesn’t see any racial bias in Daines’ actions for dismissing Haaland as a “radical,” only hardened partisanship.

“For all the reasons Sen. Daines opposes her, those are all the reasons we support her in Fort Belknap,” Werk said. “Our land is our identity, and as tribes we want to be good stewards and protect that.”

Despite Republican opposition, Haaland has enough Democratic support to become the first Native American to lead the Interior Department. The Senate Energy and Natural Resources Committee is expected to vote on the nomination next week before the full Senate chimes in.

Haaland, 60, weaved childhood memories, experiences on public land and tribes’ rights into her answers during the hearing. She talked about carrying buckets of water for her grandmother down a dusty road at Laguna Pueblo, where she’s from, careful not to spill a drop because she recognized its importance. She talked about harvesting an oryx, a type of antelope, that fed her family for a year, about her support for protecting grizzly bears indefinitely and her ancestors’ sacrifices.

Frank White Clay, chairman of the Crow Tribe, which gets much of its revenue from a coal mine on its southeastern Montana reservation, said Republicans have “legitimate concerns about natural resources.” But he urged them to consider the historic nature of Haaland’s nomination.

“A Native woman up for confirmation — her issues are Indian Country issues,” White Clay said.

Haaland pledged to carry out Biden’s agenda, sidestepping specifics on what she would do if confirmed. While the vagueness rattled Republicans, her backers said it showed she’s a consensus-builder.

“She did not lose her cool,” said Kalyn Free, who is Choctaw and supports Haaland. “To me, that’s not an indicator of her performance. ... That’s because she had to put up with this crap for 60 years. This was not a new experience for her.”