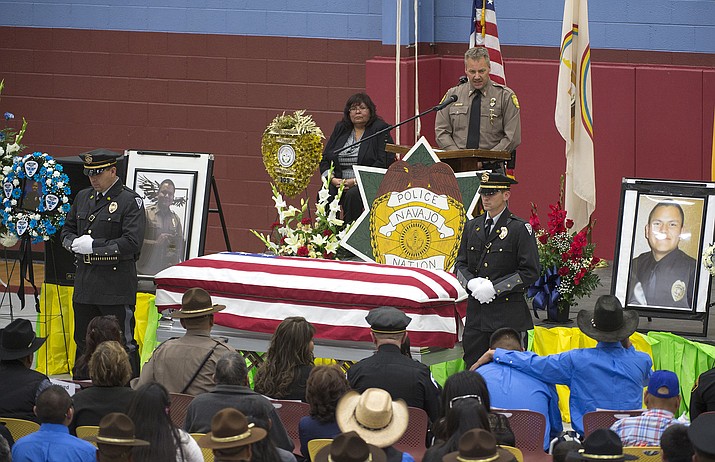 In this March 16, 2017 file photo Chaplain Mark Morris speaks during a memorial service for fallen Officer Houston Largo at Rehoboth Christian School in Gallup, N.M. The man who gunned down a tribal police officer in a remote corner of the nation's largest American Indian reservation has been sentenced to 30 years in federal prison.(Cayla Nimmo/Gallup Independent via AP,File)

ALBUQUERQUE, N.M. (AP) — A man who shot and killed a tribal police officer in a remote corner of the nation's largest American Indian reservation has been sentenced to 30 years in federal prison.

Kirby Cleveland, 37, was sentenced Monday in U.S. District Court for gunning down Navajo Nation Officer Houston James Largo four years ago. Cleveland's attorneys had sought several delays over the last year because of the coronavirus pandemic and to gather evidence and find witnesses to testify on his mental condition in hopes of receiving a reduced sentence.

In 2019, Cleveland pleaded guilty to second-degree murder, which carried a maximum penalty of life in prison. He also pleaded guilty to violating the conditions of his supervised release in a previous case in which he forced his way into a home on the Navajo Nation armed with a baseball bat and assaulted a woman in 2012.

Largo was shot March 11, 2017, on a dark road in western New Mexico while responding to a domestic violence call.

Cleveland acknowledged that he consumed alcohol that night and shot and killed Largo with a rifle. He told the court he had been attacked by a group of bandits armed with bats days earlier and fired at the officer believing he was another assailant.

A woman from the rural community saw flashing police lights that night and found Largo lying along the road, face down and bleeding. She used the radio in Largo's patrol vehicle to call for help.

Cleveland was found hiding in the hills more than a mile away, and the 27-year-old decorated police officer died the next day at an Albuquerque hospital.

The case highlighted the dangers faced nationwide by tribal police officers who often must patrol vast jurisdictions alone. It also led Navajo leaders and community members to discuss the scourge of alcohol and the constant reports of domestic violence on the reservation, which spans parts of New Mexico, Arizona and Utah.

Before the shooting, Cleveland's wife had called authorities saying he had been drinking and became angry as she and her children watched television, according to a criminal complaint. She drove him to a friend's house.

Largo arrived as a friend was driving Cleveland back home. The officer stopped the vehicle, and shots rang out soon after. The complaint said Cleveland walked home with his .22-caliber rifle and told his wife: "I shot that police officer, you need to go help him."

Federal prosecutors said Tuesday that Cleveland's sentence also includes four years of supervision after he is released from prison.