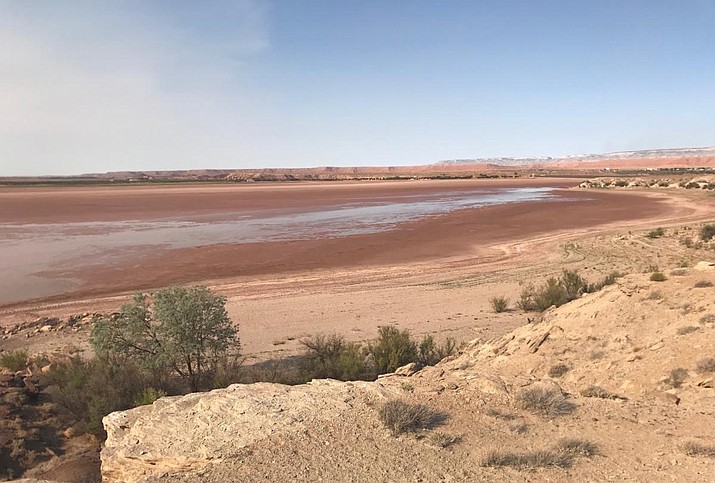 The current condition of Many Farms Lake brought on by the effects of the ongoing drought impacting Navajo farmers. (Photo courtesy of Johnson Bia, Many Farms Irrigation Office)

WINDOW ROCK, Ariz. — After a recent visit to the nearly dried-up Many Farms Lake, Council Delegate Kee Allen Begay Jr. addressed concerns about the lack of available water and infrastructure for farmers in the Many Farms region and surrounding communities.

“Many Farms was once an active agricultural region, but the lack of water has put farmers in critical situations,” Begay said. “The local chapter officials and I are continuing to find solutions to revitalizing that industry during the drought.”

Begay has indicated he has prioritized local farming activities within his respective chapters (Tachee/Blue Gap, Many Farms, Nazlini, Tselani/Cottonwood, Low Mountain), and believes the poor water infrastructure has contributed to the affected 2,500 acres of farmland in Many Farms.

The lake, which once had an abundance of fish and vegetation, drew in visitors from both on and off of the Navajo Nation. Now, all that remains is a fishless-murky pond surrounded by dried-up dirt from the lake’s floor, according to Begay.

“We are in the talks of looking at alternatives such as water wells, artisan wells, and then pumping water out from the aquifer to meet our needs and to have a backup source of water,” said Many Farms Farm Board President Julian Begay.

In 2018, the 23rd Navajo Nation Council passed Resolution No. CAP-19-16 which approved funding for $4.5 million for the Many Farms Agriculture Revitalization Project. However, the funding amount being allocated into two parts and the complication of access to the funds has inhibited the work needing to be accomplished.

“I appreciate the local farm board officials and the Many Farms Irrigation office for continuing to address the drought situation and improving the irrigation infrastructure with the limited funding and resources they have,” Begay said.

By receiving assistance, Many Farms could see a growth in their agricultural production, economy, and livelihood of its residents.

“I have reached out to BIA, Navajo Nation Division of Natural Resources, state elected officials and our congressional delegation for additional resources and assistance,” Begay said.