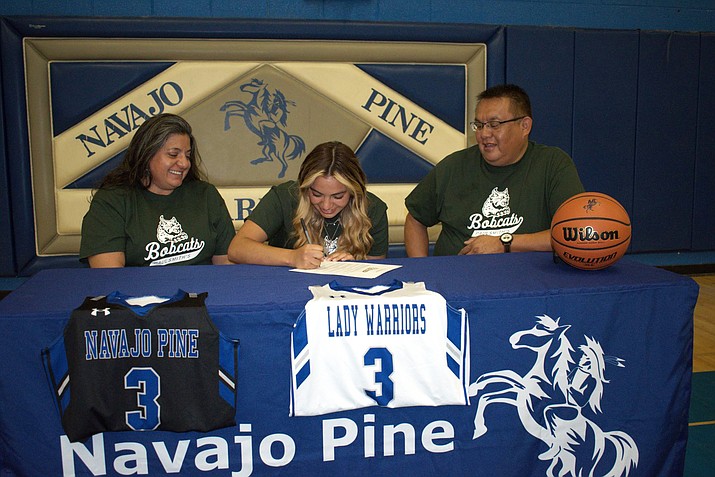 Jordan Louis of Crystal, New Mexico, and recent graduate of Navajo Pine High School, signs a letter of intent to play basketball for Paul Smith’s College in New York. She was supported by her parents, Shane and Monique Louis, during the signing ceremony June 12, at NPHS. (Submitted photo)

What caught Coach Pond’s eye about Louis was her floor-general ability to run the offense and put every one of her teammates in the right place.

The Paul Smith’s College Bobcats found Louis on the NCSA recruiting site, and Pond watched her film and instantly reached out to her. Pond said that it marks the rebirth of a program whose freshman class is built to be a contender in the Yankee Small Conference.

Paul Smith’s College is located in the heart of the Adirondack Mountains in Northern New York just thirty minutes from Lake Placid, New York, where the 1932 and 1980 winter Olympic Games were held.

USCAA student-athletes are encouraged to pursue their interests and passions beyond the classroom and field of play…to discover themselves.

Louis said she has an interest in studying international tourism and business development. Louis said New York is a long, long way from the dusty roads of Crystal, but she is eager to pursue her dreams of playing basketball and to see the world.

Nez said Louis has exceeded all expectations — she is the overall scoring leader in the state of New Mexico with 666 points during the 2019-2020 season, and she scored over 2,000 points in the span of 5 years with the Navajo Pine Girls Basketball program.

“We are extremely excited and proud to hear that Jordan will continue her basketball career at Paul Smith’s College, Home of the Bobcats,” Nez said. “We, the Navajo Pine High School teachers, staff, the community members of Navajo, New Mexico, and all of Jordan’s fans are all looking forward to seeing Jordan play at Paul Smith’s College. We wish all the best to Jordan and her successful journey to New York.”

Sean Manuelito, NPHS athletic director said agreed that Louis has been a great student-athlete that NPHS takes pride in and believe she will have a successful career at the college level.

“She has prepared herself in the classroom and on the court being on the varsity team for the past five years where she performed well since her eighth grade year,” Manuelito said. “Her leadership on the court is outstanding and her academics is just as great being named the Salutatorian of her senior class. She will do very well at the next level and we wish her the best.”

“She has dedicated herself to academic excellence, service, character, and leadership. She will be a powerful leader in the future that allows for peers to grow and learn from her leadership,” Stepney said.

Louis attributes her basketball skill development and style of play to her father, uncles, and grandfather. She said she is grateful to all the coaches she had at school and said she worked hard for the past five years developing her skills year-round, especially during the off-season dribbling, shooting, passing, running and lifting weights. She said she was always prepared to play when the season started each year.

“I am most grateful to my older brothers and sisters who played with me on the dirt court at home and helped me to become aggressive as they were all taller and bigger than me,” Louis said.