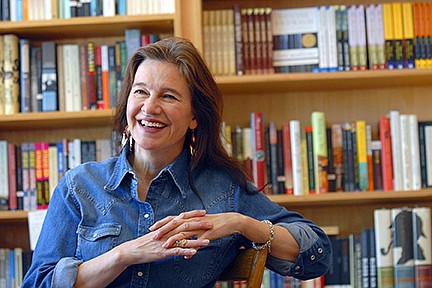 Author Louise Erdrich reflects on growing up in North Dakota and her new book “The Plague of Doves” at her store BirchBark Books in Minneapolis. (AP Photo/Dawn Villella, File)

NEW YORK — Native American writers Louise Erdrich and Natalie Diaz were named winners of the prestigious Pulitzer Prize in the categories of fiction and poetry — also included was Marty Two Bulls Sr. who was named a finalist in editorial cartooning June 11.

Erdrich, Turtle Mountain Band of Ojibwe, is the Pulitzer winner in fiction for her novel, “The Night Watchman.” The novel is a New York Times best seller and is based on the life of Erdrich’s grandfather who worked as a night watchman. The book is based in the 1950s and captures a community’s efforts to halt the proposed displacement and elimination of several Native tribes. Her book is published by HarperCollins.

The prize for fiction goes to a distinguished fiction by an American author. The prize is $15,000.

Diaz, Mohave and Gila River Indian Community, is the winner in poetry for her collection of poems, “Postcolonial Love Poem.” The book is Diaz’s second collection and is described as “an anthem of desire against erasure.” Many of the poems discuss the wounds inflicted by America onto Indigenous people. The book is published by Graywolf Press.

Two Bulls Sr., Oglala Lakota, was named a finalist in the editorial cartooning category. No award was given in this category this year by the Pulitzer board because none of the finalists received a majority vote, a spokesperson told Indian Country Today.

This year’s Pulitzer prizes for journalism, books, drama and music were announced June 11 by Columbia University. The award is one of the most prestigious awards in the country honoring journalism and the arts. It was established in 1917.

Shortly after the awards were announced, many took to social media to offer their congratulations.

“So cool to see so much Native representation at the @PulitzerPrizes!” wrote journalist Tristan Ahtone on Twitter. “Congrats to Marty Two Bulls Sr., Louise Erdrich and Natalie Diaz! These honors are so well deserved and way overdue.”

Viet Thanh Nguyen, a professor who serves on the Pulitzer Board, tweeted his congratulations to the winners.

Erdrich is an award-winning author of seventeen novels, including volumes of poetry, children’s books, short stories and a memoir. Previously, she was a finalist for a Pulitzer Prize for her book “The Plague of Doves.”

Diaz is an award-winning author. Her first collection of poems, “When My Brother Was an Aztec” won an American Book Award. In 2018, she was a MacArthur Fellow and previously was named a Lannan Literary Fellow and a Native Arts and Cultures Foundation Artist Fellow.

She is currently the director of the Center for Imagination in the Borderlands at Arizona State University.

At least one other Native author won a Pulitzer in the arts. N. Scott Momaday, Kiowa, won in 1969.

A special citation was given by the Pulizer board to Darnella Frazier, the 17-year-old who recorded a video of George Floyd’s death. The video was circulated worldwide and was key evidence during the murder trial of former police officer Derek Chauvin.