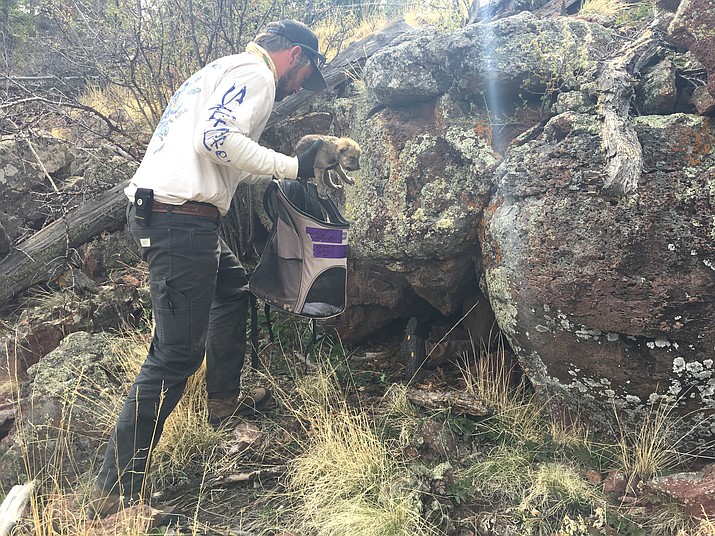 ALBUQUERQUE, N.M. — A record 22 captive-born Mexican gray wolf pups have been placed into dens in the wild in the southwestern U.S. to be raised by surrogate packs, the U.S. Fish and Wildlife Service announced June 7.

The agency called this year’s cross-fostering season a success, saying the endangered predators that have been part of the fostering program over the last six years have helped to boost genetic diversity among the wild population in New Mexico and Arizona.

Officials said that over the last two months, nine pups were fostered into three different packs in eastern Arizona and 13 were placed with five packs in western New Mexico. Last year, 20 pups were placed into dens in the wild.

Jim deVos, the Mexican wolf coordinator with the Arizona Game and Fish Department, said in a statement that the fostering program is built on partnerships with private organizations that are part of a nationwide captive breeding effort.

The captive-born pups came from litters at facilities in New Mexico, Texas and Missouri.

“Without this important partnership, genetic recovery would be essentially impossible,” he said. “Importantly, we are now seeing Mexican wolves that have been fostered producing litters themselves.”

Cross-fostering involves placing pups less than 14 days old from captive breeding populations into wild dens with similarly aged pups to be raised as wild wolves. Officials said cross-fostered pups have the same survival rate — about 50 percent — as wild-born pups in their first year of life.

According to the wolf recovery team, at least 12 of the wolves fostered over the years are still alive and surviving in the wild. Seven of these wolves have reached breeding age and four have subsequently produced pups in the wild.

Since pups are too young to mark when fostered, officials said only those that are recaptured can be confirmed as being alive, so it’s likely more have survived.

Some environmentalists questioned those numbers and said cross-fostering doesn’t go far enough to put the species on track for recovery. The Center for Biological Diversity is among those pushing for wildlife managers to release breeding pairs along with their pups as bonded family packs.

Michael Robinson with the Center for Biological Diversity suggested that captive-born, well-bonded packs released into the wild have a lower mortality and disappearance rate than cross-fostered pups. He also raised concerns about illegal killings, noting that the fate of many of the 50 pups placed into wild dens between 2016 and 2020 is unknown.

“Aside from whatever is ailing cross-fostered pups in the short term, (the Fish and Wildlife Service’s) failure to address illegal killing casts a pall on genetic conservation of released wolves no matter what manner of release is employed,” Robinson said in an email.

The most recent survey of Mexican wolves determined there were at least 186 of the animals spread between New Mexico and Arizona. Over the last five years, the wild population has nearly doubled.

Meanwhile, ranchers in the recovery area have said they are continuing to see more livestock killed by the wolves despite efforts to scare the animals away. They have been vocal with their opposition to more wolf releases, including one planned at Ted Turner’s ranch in southwestern New Mexico.