Canadian mass grave prompts investigation into U.S. boarding schools
Unlike Canada, the U.S. has never acknowledged its role in the forced assimilation of generations of Indigenous children at boarding schools 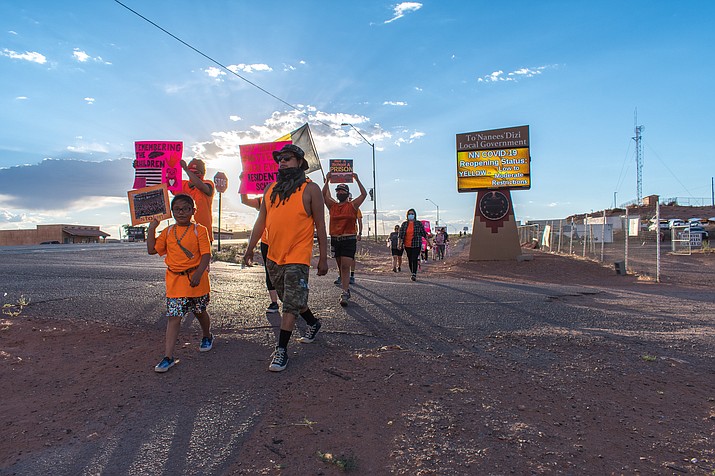 Tuba City residents participate in a solidarity walk, organized by Charlene Dodson, for the 215 kids found buried at the site of the Kamloops Indian Residential School, which was Canada’s largest facility. The facility was operated by the Roman Catholic Church from 1890 to 1969, when the government took it over as a day school, according to Indian Country Today. The school was closed in 1978. (Photos courtesy of Alyssa Peaches Armendez)

BRITISH COLUMBIA. — The world was shocked to hear about the discovery of the unmarked graves of 215 children at the Kamloops Indian Residential School in British Columbia, Canada.

For many Indigenous people, however, the most shocking element of the story is not the discovery of the graves but the fact that it’s taken so long for non-Natives to acknowledge the grim details of this long-ignored history of Indian boarding and residential schools, a story that is part of both U.S. and Canadian history.

Moreover, the news in Canada begs the question: Are there similar burial sites at U.S. Indian boarding schools?

Researchers, advocates and allies agree with a resounding, “Yes.”

Researchers say that most of the more than 350 U.S. Indian boarding schools — more than double the 130 or so schools in Canada — have cemeteries associated with them. According to findings of Canada’s Truth and Reconciliation Commission, convened as part of the country’s Indian Residential Schools Settlement Agreement, more than 150,000 Aboriginal children were placed in schools from the 1870s to 1996. The commission estimates that up to 6,000 children died at the schools from disease, abuse, starvation and other ills.

Unlike Canada, the U.S. has never had an accurate accounting of the number of Indian boarding schools here, the number of children who attended or those who died at the schools. According to data collected by the National Native American Boarding School Healing Coalition, by 1900, there were about 20,000 children in boarding schools; by 1925, that number had more than tripled.

Denise Lajimodiere, Turtle Mountain Chippewa, former executive director of the coalition, heard many stories of children buried in unmarked graves outside of various school cemeteries during her research into the history of Indian boarding schools and in interviews with survivors.

“Somebody needs to come to these schools with ground-penetrating radar and look for those babies,” she told Indian Country Today.

The coalition is now working to gather information with the help of private grants.

“We did a Freedom of Information request for this information from the Bureau of Indian Affairs; they were unable to answer,” said Christine Diindiisi McCleave, chief executive officer of the coalition and a citizen of the Turtle Mountain Ojibwe Nation. “So, we’ve been doing the research ourselves, gathering information from the National Archives and Records Administration, digitizing it, and plan to make it available to people online.”

To date, little has been done to locate graves at U.S. boarding school sites.

In 2016, Marsha Small, a citizen of the Northern Cheyenne tribe, used radar to look for unmarked graves at the Chemawa Indian School near Salem, Oregon, as part of her master’s thesis at Montana State University.

Small says that her research indicates there may be hundreds of unmarked graves at Chemawa.

“In looking at the imagery, there is a great deal of disparity in how the graves are laid out; it’s my belief that there are many more graves than are accounted for in the school’s records,” Small said.

Currently working on her doctorate, Small hopes to conduct more in-depth research at Chemawa if she can secure funding. Chemawa is the oldest continuously running Indian boarding school in the country; the Bureau of Indian Education currently operates the school.

Remains of some of the children who died at the Carlisle Indian Industrial School in Pennsylvania are being returned to their families. Carlisle, the first U.S. government Indian boarding school, opened in 1879 on an old Army base and closed in 1918. According to the Sentinel, the Army has disinterred the remains of 10 children who died at Carlisle and will be returning them to their families this month. The Army has done a number of repatriations of student remains at the request of families in recent years.

Unlike Canada, the U.S. has never acknowledged or addressed its role in the forced assimilation of generations of Indigenous children at federal and Christian denominational boarding schools.

“We need more researchers to verify data here in the U.S.; Canada is so far ahead of us,” Lajimodiere said.

The remains of 215 children have been found buried at the site of the Kamloops Indian Residential School, Canada’s largest facility. It was operated by the Roman Catholic Church from 1890 to 1969, when the government took it over as a day school. It closed in 1978.

Chief Rosanne Casimir of the Tk’emlups te Secwépemc First Nation said in a news release that the discovery was an “unthinkable loss that was spoken about but never documented at the Kamloops Indian Residential School.”

McCleave estimates that fewer than 10 percent of the U.S. public know anything about the history of Indian boarding schools in this country.

“The discovery at Kamloops school really underscores the need for these sorts of discussion here in the U.S,” McCleave said.

“Sadly this is not an isolated incident,” he said. “We have to acknowledge the truth. Kids were taken from their families, returned damaged, or not returned at all.

Meanwhile, there is what Lajimodiere describes as a resounding silence from the U.S. federal government regarding its role in the boarding school era.

Although reparations were paid in Canada, the possibility of financial reparations for boarding school survivors in the U.S. is unlikely because of legal limitations. Many are pushing, however, for the creation of a truth and reconciliation commission.

McCleave cautions, however, that without truth and justice there can be no reconciliation or healing.

“In a transitional justice framework, one has to have a thorough accounting of what happened. Most importantly, we need to hear the truth from the perspective of those who were harmed,” she said.

“The United Nations Human Rights Council says we have a right to that truth,” she added.

McCleave and others are hoping that a bill introduced in Congress in 2020 by then-Rep. Deb Haaland, now Secretary of the Interior, and Senator Elizabeth Warren, will be resurrected. The Truth and Healing Commission on Indian Boarding School Policy in the United States Act died in Congress when first introduced.

The bill would establish the Truth and Healing Commission on Indian Boarding School Policy in the United States. Among other activities, the commission would study the impacts and ongoing effects of the Indian Boarding School Policy — a federal policy under which American Indian and Alaska Native children were forcibly removed from their family homes and placed in boarding schools. It would also make recommendations to discontinue the removal of American Indian and Alaska Native children from their families and tribal communities by state social service departments, foster care agencies, and adoption agencies.

Regardless of the occasional news story about Indian boarding schools and the ongoing refusal of governments to acknowledge either their existence or impact on Native people, the researchers and advocates soldier on.

For White, the work is spiritual. She and others report a sense of being led to do the work of researching and uncovering the truth of what happened at the boarding schools.