After a tough year, Shilah Williams to compete for title at National Junior High Rodeo 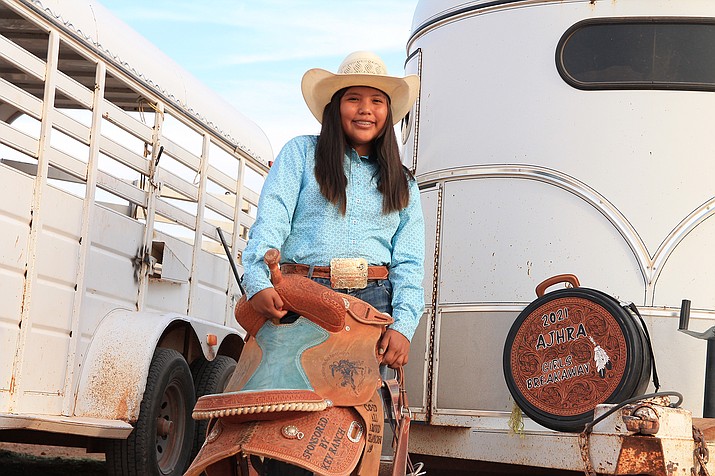 It’s been a tough year for rodeo, especially rodeo on the reservation.

For many, including the Williams family of Tuba City, Arizona, rodeos are more than just a hobby, they are a way of life and now, Shilah Williams, an eighth grade student at Tuba City Boarding School, is recognizing her goal and will be competing for a national title June 20-26 at the 2021 National Junior High Finals Rodeo in Des Moines, Iowa.

Shilah earned her place at the national event after placing in the top four in the Girl’s Breakaway Roping for the Arizona Junior High School Rodeo Association in May.

Shilah is one of five Navajo students from Arizona who qualified for the national competition. Joining her are Oodessa Barlow of Rock Point, Arizona and Colby Segay, John Boyd IV and Gavin Warren of Kayenta, Arizona.

Students will compete against ropers from around the U.S. and even as far away as Australia and Mexico. Shilah said she is excited and ready to compete.

This isn’t her first rodeo.

She has competed through the Western Jr. Rodeo Association since she was a child.

In 2018, she competed at the Jr. National Finals Rodeo in Las Vegas, Nevada.

Her father, Brandon Williams, is the president of the Western Jr. Rodeo Association and on a normal year schedules rodeos and events for junior rodeo competitors across the reservation.

Because rodeos are currently not allowed on the reservation, the Williams family made the decision last year to compete off the reservation through the Arizona Jr. High Rodeo Association.

“With everything that’s been going on and with nothing locally, we had to go out and find rodeos,” he said. “So that’s why we ended up trying the Arizona Jr. High Rodeo Association this year.”

“Our kids around here on the Rez are pretty tough, but it was different, just getting through the ranks of the competition,” Williams said. “We knew what it was like but we had never tried it before.”

Shilah agreed, stating she was up against well-trained horses and ropers.

“Most of the girls had really tough horses that knew how to stop and they were really fast. They would rope right out of the box too,” she said.

She said learning to rope as soon as her horse left the box was new for her.

“I tried to be consistent in roping the cow,” she said.

Traveling to Iowa for a rodeo is a new experience for them.

“The furthest I’ve ever been is Albuquerque and up to Wyoming, that’s about it,” Williams said. “We’re excited.”

“I think it’s going to be a long trip,” Shilah added.

Shilah plans to take her horse, Sissy, a 10-year-old buckskin mare, and believes she will be competitive for the national title. 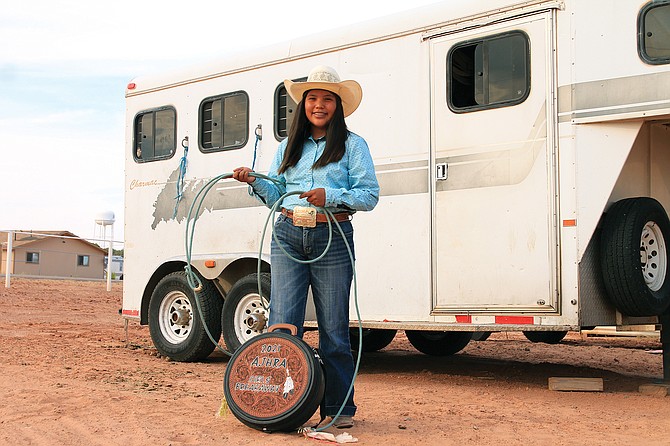 Shilah Williams of Tuba City, Arizona, will compete for a national title at the National Jr. High Rodeo in Des Moines, Iowa, June 20-26. She will compete in the Girls Breakaway Roping event on her horse, Sissy. (Loretta McKenney/NHO)

In addition to competing for more than $80,000 in prizes, NJHFR contestants will also be vying for more than $200,000 in college scholarships and the chance to be named a National Junior High Finals Rodeo World Champion.

To follow local favorites at the NJHFR, visit www.NHSRA.com/juniorhighfinals daily for complete results.

The future of Jr. rodeo on the reservation

Williams said he is optimistic rodeo will be allowed to return to the reservation.

“We’re hoping. That’s all we can do is hope,” he said. “We tried to continue to do rodeos off the reservation in Page, but we can’t do anything without the people who sponsor rodeos. If we try to do it ourselves it (costs) quite a bit and right now everybody is still struggling, so we decided not to do our season again — that’s two years for us.”

One concern with not holding rodeos for several years in a row is that youth on the reservation will begin to lose interest. Which is one reason Williams tried to get students in WJRA interested in competing off the reservation.

“There’s a lot of kids that I think have lost interest in rodeo. It was one of my goals to try to get rodeo going again — not here (on the reservation) but somewhere else that would allow it, but that didn’t happen for us,” he said.

Williams said that for his family, rodeo is an outlet and after more than a year of lockdowns, competing once again has been a blessing.

Williams said to afford the trip to Iowa, the family has had food sales and fundraisers.