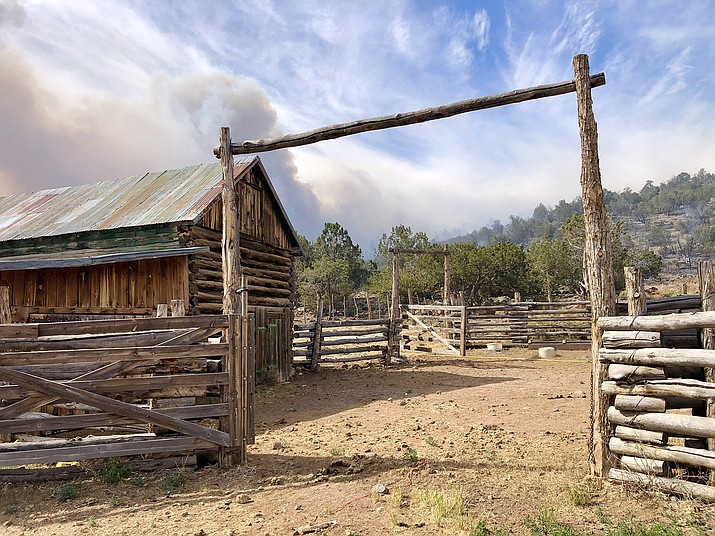 Crews burned out along the boundary of Cedar Ranch adjacent to Coconino National Forest as the main fire was approaching the private property. The backfire reduced fuels near the ranch and kept the historic barn and other structures from being destroyed. (Photo/USFS)

FLAGSTAFF, Ariz. - Windy conditions have contributed to growth of the Slate Fire on Coconino National Forest. The fire is zero percent contained and grew from 2,080 acres June 9, to over 5,000 acres June 10.

Firefighters are working to contain the fire and protect structures on Cedar Ranch, which is located 23 miles northwest of Flagstaff along Highway 180. The fire is burning in ponderosa pine, pinyon pine and juniper habitat.

Windy and active wildfire conditions, along with burnout operations, are the main factors in the growth of the fire, which is still moving in a northeastern direction.

Portions of Highway 180, from mileposts 235 to 248 will remain closed for the foreseeable future while crews work to suppress the fire.

Crews are currently working to manage the fire spread both east and west of Highway 180, with containment still at zero percent.

Motorists should avoid Highway 180 north of Kendrick Park, and visitors to the Grand Canyon National Park should use Highway 64 from Williams to access the entrance to the Park.

Crews plan to spend June 10 conducting burnout operations west of the highway to secure the northwestern flank of the fire, while using hand crews and dozers east of the highway to direct the fire northeast and away from Cedar Ranch. This will help herd the fire toward fuels and terrain that will be more effective in containing that section of the fire, rather than allowing the fire to move south toward the Kachina Peaks Wilderness.

While there have been no structures damaged due to the fire, crews will continue to implement structure protection around Cedar Ranch as well as several archaeological sites in the area.

Recreation sites in the area are closed, including the Red Mountain and Slate Mountain trailheads, Kendrick Cabin and a portion of the Arizona Trail from Kelly Tank (mile 603.3) and Cedar Ranch (mile 616.2).

The fire was called in by a Coconino County Sheriff's Officer at 3 a.m., and the cause is still under investigation.