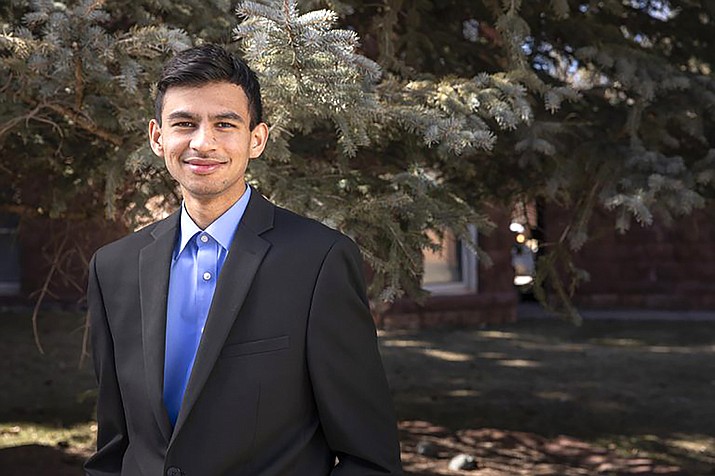 Aarish Raza, originally from Pakistan, grew up in Chinle before attending NAU. (Photo/NAU)

FLAGSTAFF, Ariz. — When Aarish Raza graduates, it will be after the hardest semester of his life — taking eight classes while working three jobs and preparing for his nursing certification tests and his future as a nurse. But he has no regrets.

“I have learned a lot from my failures and mistakes in that I understand the importance of time management, self-cultivation and dedication,” he said. “Nothing in life is easy, and I must work hard if I want to be successful.”

Raza, a nursing major who is the Distinguished Senior for Northern Arizona University’s College of Health and Human Services, visited NAU from his home in Chinle. He immediately loved the campus and the people he met.

Growing up in Chinle

His journey to Arizona, however, was a bit longer. Raza’s family is from Pakistan, and he was born there. His family relocated thousands of miles to the Navajo Nation for his father’s job as a teacher, and he grew up in Chinle.

“I’ve really loved my experience growing up on the reservation,” he said. “It was a significantly different culture from my own, yet we shared a lot of the same values. My American experience has been completely unique compared to others, and I feel like that gives me a completely different outlook on what it means to be an American.”

His time at NAU included research as well. When he was a freshman, Raza signed up for The Think of Ink, a seminar that allowed him to research tattoos and the various meanings they have held in different cultures and eras. His class examined ancient and Indigenous tattoos, their cultural influences and their symbolism in urban areas. Even prison tattoos were on the syllabus. He presented his research at that year’s First Year Seminar Research Symposium.

“The biggest thing I learned was that everyone expresses themselves differently, and tattoos are one form of expression,” he said. “Moreover, there are more to tattoos than meets the eye, as they can relate to personal experiences or even religion. I know there is a bit of taboo surrounding tattoos, but I feel like learning about them completely dispelled it for me.”

As his NAU career progressed, he moved into mentoring, helping a struggling anthropology student understand the course material, and was a teaching assistant for a couple of nursing courses. These experiences have helped him make friends and become a better teacher and leader while also getting a better understanding of the material himself.

These experiences also meant regular interactions with faculty members and administrators, notably nursing professor Dawn Rivas, who also is the associate director of NAU’s nursing program. She met Raza more than two years ago at a new student orientation and became his mentor, and he regularly talked to her about his career plans. She’s gotten to know him more through his teaching assistantship.

“Aarish would come to our nursing administration office daily to get a key to an empty office so he could go pray,” she said. “I looked forward to seeing him every day because he was always so pleasant and smiling.”

Helping to educate others has long been a passion of Raza’s, even in less traditional ways; he is the graphic designer and video editor of PreMath, a YouTube channel of instructional math videos that have millions of views.

He’s also spent his NAU time working and volunteering in health care, preparing for his career as a nurse. He has worked at Flagstaff Medical Center as a patient care technician, volunteered in the emergency department at FMC and received his certified nursing assistant license in 2019.

After graduation, Raza will work at FMC as a nurse.