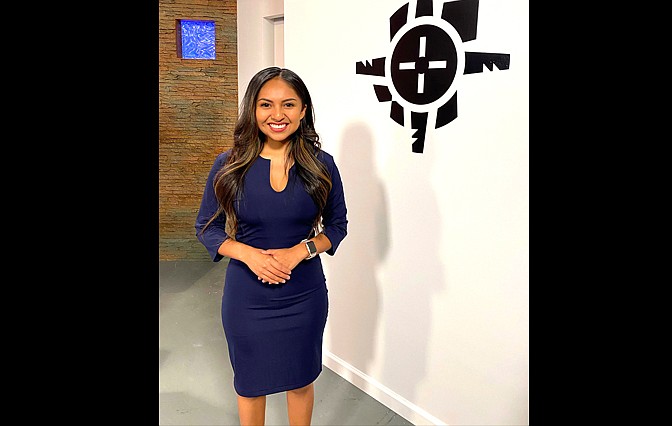 LAS VEGAS, Nev. — Aliyah Chavez has dreamt of being on a television news program since her childhood. Now her dream is coming true.

Indian Country Today’s (ICT) announced July 20 that Chavez would be their newest anchor.

“When I got the news that I was chosen to be the permanent anchor of Indian Country Today, I was over the moon. So excited,” Chavez said. “As a young girl growing up on the rez, I never dreamed this would be possible. But I dreamt and worked — and here we are.”

Indian Country Today said naming Chavez, Kewa Pueblo, as its anchor pushes their platform in the direction of reaching a younger audience and more Indigenous communities.

“Our growth is now a fuel for careers for our youth. Our goal is to create an environment where people can do their best work, telling the stories that change the narrative about our world,” Trahant said. “Our goal is a national news broadcast that covers and serves all of Indian Country.

The newscast runs on a variety of PBS stations nationwide in Alaska, Wyoming, North Dakota, South Dakota, New Mexico, Oklahoma and Arizona, including urban areas such as Denver, Los Angeles and Chicago. It also reaches an international audience in Canada and Australia.

“One of the cool things about Aliyah as the anchor is that we are reminding our readers and viewers about a long tradition of Indian women as storytellers,” Trahant, Shoshone-Bannock, said.

Chavez holds a bachelors in communication and comparative studies in race and ethnicity. She started as a reporter for ICT journey in 2018 when she emailed Trahant seeking freelancing opportunities in her last year of her graduate program at Stanford University.

She reported election results on the first live Native Election Night broadcast from southern California in 2018.

Chavez joined ICT as a fellow under the Rowland and Pat Rebele Journalism Internship Program at Stanford in 2019 and moved into a full-time reporter-producer position in the fall of 2019. Since then, Chavez has covered the 2018 and 2020 elections, including the presidential race and the Iowa caucus.

“To my Indigenous relatives, I encourage you to look to the field of journalism and media because each of you are experts in your communities,” she said. “Thank you to my family, mentors, friends and loved ones. Your support is invaluable to me.”

Tune in to the ICT newscast on FNX this fall to watch Chavez’s debut.