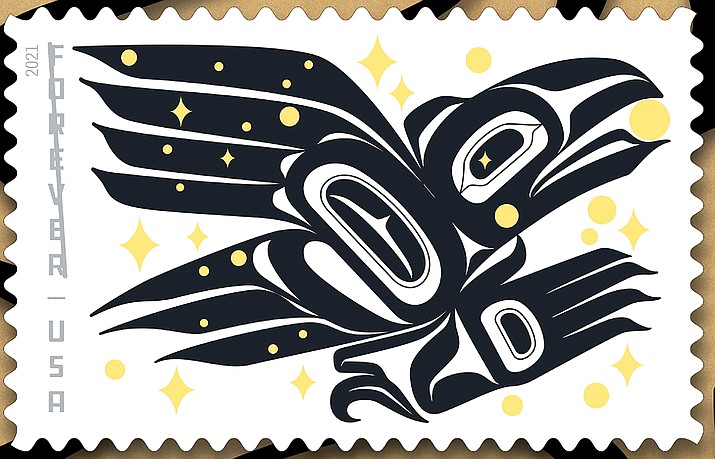 The Raven Story Stamp is available for preorder online at usps.com. The stamp highlights Indigenous cultures of the Pacific Northwest Coast. (Photo/USPS)

The stamp will be unveiled July 30 at the Sealaska Heritage Institute in Juneau, Alaska.

According to U.S.P.S., the Raven Story stamp highlights an important story to the Indigenous people of the Pacific Northwest Coast.

Merging traditional artwork with modern design touches, this stamp depicts one of many stories about Raven, a figure of great significance to the Indigenous people of the northern Northwest Coast, part of the area that ranges from Southeast Alaska through coastal British Columbia and south into Washington state.

The stamp was created by Tlingit/Athabascan artist Rico Worl. The stamp design depicts a raven just as he escapes from his human family and begins to transform back into his bird form.

To create the stamp art, Worl used formline, the traditional design style of the Indigenous people of the northern Northwest Coast. The art director is Antonio Alcalá.

Among the cultures of the region, the raven plays an essential role in many traditional tales, including stories about the creation of the world. The stamp is inspired by the traditional story of the raven setting the sun, moon and stars free.

The Raven Story stamp can be pre-ordered at usps.com/stamps.