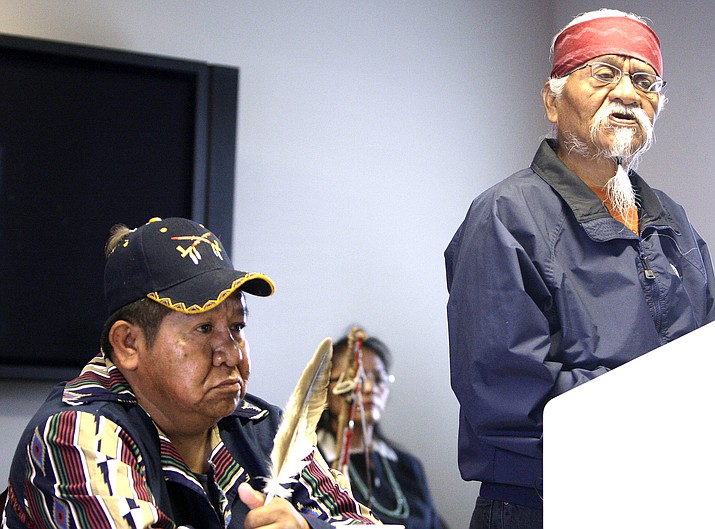 Arizona Havasupai Indian tribe member, elder, and spiritual leader, Rex Tilousi, right, speaks during a news conference in Phoenix, as tribe member Dennie Wescogame listens. Tilousi, 73, died last week of natural causes with his family by his side. Services for Tilousi began June 25 with a traditional wake at the family’s home in the village of Supai. (AP Photo/Ross D. Franklin, File)

FLAGSTAFF, Ariz. — A longtime leader of the Havasupai Tribe who fought to protect its resources by lobbying against mining around the Grand Canyon and snowmaking at an Arizona ski resort has died.

Services for Rex Tilousi took place June 25 with a traditional wake at the family’s home in the village of Supai, followed by public events and burial at the Grand Canyon, where Tilousi retired as a cultural interpreter for the national park.

“He’s going to be there to protect it for eternity, so that provided some comfort to the family,” said his niece, Carletta Tilousi.

Rex Tilousi died of natural causes with his family at his side, she said. He was 73.

Tilousi served as a tribal leader for more than 30 years, including multiple stints as chairman and vice chairman of the small tribe whose reservation lies deep in a gorge off the Grand Canyon.

He also was a spiritual leader, working to preserve the tribe’s way of life, its songs and the Grand Canyon that was home to the Havasupai before it became a national park, the tribe said. Friends, family and co-workers remembered him as a peaceful, kind-hearted man with a warm and welcoming spirit.

When Tilousi wrapped up interpretive talks at the Grand Canyon, visitors would follow him yearning for more, said Jan Balsom, a senior adviser at the park.

“I joked about him being a buddha,” she said. “He had this effect on people. As they listened to him, they were brought into his world and his way of understanding the Grand Canyon.”

As an advocate, Tilousi sought to keep companies from mining near the boundaries of Grand Canyon National Park and joined other tribes in speaking out against snowmaking at the Arizona Snowbowl outside Flagstaff. In both cases, he feared the tribe’s water resources could become contaminated and the tribe’s spiritual practices negatively affected.

The work took him to the Arizona Legislature and across the country and world, raising the profile of the Havasupai Tribe.

“He was very committed to voicing concerns on behalf of the animals and the water and the people,” Carletta Tilousi said. “He committed all his time to public service, and that was very impressive.”

The federal government ultimately approved snowmaking with reclaimed water. Uranium mining has been at a standstill while companies wait for prices to rebound.

Stephen Hirst, the author of a book on the Havasupai called “I am the Grand Canyon,” had been working with Tilousi to write down stories and remembrances, and record songs so that Havasupai children could have them.

“We didn’t get that project finished, unfortunately, but there are some amazing stories,” Hirst said.

Roger Clark recalled one of the first conversations he had with Tilousi, who asked Clark why he should trust him as a conservationist. Clark acknowledged that Tilousi had no reason to trust him as an outsider but said he cared about the Grand Canyon and could learn a lot from Tilousi’s connection to the land.

“He smiled and said, ‘OK, Roger Ramjet,’” Clark said, referencing a classic cartoon character who was out to save the world.

“That really started our relationship in a humorous, compassionate and respectful way, and it got richer, from my point of view, from then on,” Clark said.

On the Havasupai reservation, Tilousi hunted, rode horses and shared Havasupai stories and culture that he had to learn later in life. Hirst said many tribal stories were passed down during the winter when children, including Tilousi, were away at boarding school.

“It was hard for him,” Hirst said. “So he became determined to do that — he learned old songs.”