1 killed, 1 injured after falling from cliff at Chevelon Creek 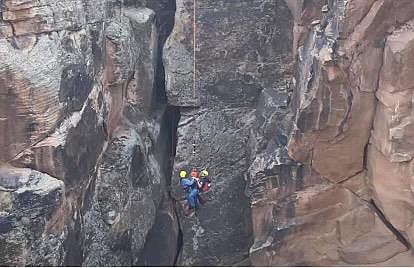 Two men were seriously injured, one fatally, when they fell while climbing down a cliff at Chevelon Creek to help a friend July 11. (Photo/Navajo County Sheriff's Office)

HOLBROOK, Ariz. (AP) — Two men were seriously injured, one fatally, when they fell while climbing down a cliff to help a friend who had jumped into a creek, the Navajo County Sheriff's Office.

A 32-year-old man died and a 28-year-old man was hospitalized for critical injuries after they fell July 13 at a site along Chevelon Creek.

A 34-year-old man whom the other two men had been trying to help was taken to a hospital for evaluation of minor injuries, while a 55-year-old person who also was present was not injured, the office said.

No identities were released, however, all four men were from Leupp, Arizona.

Both of the seriously injured men were stuck in a crevasse along the creek when deputies arrived in a response to a 911 call, the office said.

The office said a sheriff's deputy climbed down the cliff to help the injured men and the rescue and recovery operation was conducted by personnel Joseph City Fire and Medical, Coconino County Search and Rescue and the Arizona Department of Public Safety.